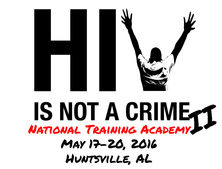 May 6, 2016: In just a little over a week, theHIV Is Not a Crime II National Training Academy will convene at the University of Alabama in Huntsville. There is still time toregister to train alongside committed advocates building an intersectional movement to end HIV criminalization! The Training Academy will take place from May 17 – 20, 2016.

Positive Women’s Network – USA (PWN-USA) and the SERO Project — two networks of people living with HIV — have joined forces to organize the Training Academy. We are thrilled to announce three exciting keynote speakers at the event:

See below for biographical information for our speakers, in addition to highlights from the event’s dynamic program!

The Training Academy will convene in the Deep South — the region most heavily affected by not only HIV, but many other symptoms of a history steeped in injustice and trauma.

Come to Huntsville and learn strategies from advocates opposing these unjust laws!