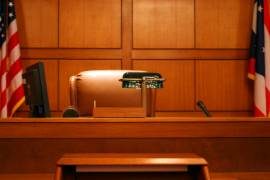 Through Lambda Legal’s Fair Courts Project, we provide training for judges, court staff and attorneys nationwide on LGBT cultural competency and bias related to gender and sexuality. These trainings are part of our work to increase access to justice; and we have evidence that they are making a difference in the lives of those working in the courts and those interfacing with the courts as defendants, plaintiffs, jurors and witnesses.

Here are 3 reasons we are training judges, court staff and attorneys nationwide:

1.       Cultural competency and anti-bias education affirms the dignity of LGBT court users and court users living with HIV. Most judges, attorneys and court staff want to treat every court user with respect and dignity, and all court officers have an ethical duty to treat everyone in the courtroom fairly and respectfully, but many lack the knowledge to do so. Others may treat court users with disrespect or discrimination because of deeply held, but often unconscious biases. Still others may feel justified in their explicit bias towards LGBT people or people living with HIV. Our trainings create a more fair, respectful and just court experience for litigants, jurors and witnesses by educating judges, attorneys and court staff on how to address individuals with correct names and pronouns, how to question, examine and interrupt some of their biases about gender and sexuality, and how to relate others’ identities and experiences which may be very different from their own to their common shared humanity.

2.      Cultural competency and anti-bias education improves the lives and work environments of judges, court staff and attorneys. When bias is reduced in the courthouse, working conditions are improved for judges, court staff and attorneys who are LGBT, intersex, or living with HIV. We also address intersecting forms of discrimination that affect people of color, indigenous people and people with disabilities. Our trainings can also impact participants’ lives on a personal level. After a recent training for criminal court judges and staff, an older participant told us that she had always felt as if she was an “alien” and that there was no one else in the world like her until the day of the training when she learned the word “intersex” and realized that word described her and others like her. She went on to say that this one training had changed her life and ended decades of shame, confusion and secrecy. Many other participants have said that our trainings helped them to understand and respectfully relate to LGBT family, friends and co-workers.

3.      Cultural competency and anti-bias education strengthens the judicial system. Lambda Legal’s 2015 survey of the experiences of LGBT people and people living with HIV in court, Protected and Served?, found that only 27% of transgender people and 33% of LGBT people of color who responded said they “trust the courts.” One likely reason for mistrust of the judicial system is the implicit and explicit bias of judges, attorneys and court staff that negatively impacts the experience of court users in myriad ways. Bias and lack of cultural competency (“cultural competency” is a term meaning reasonable familiarity with the experiences, language and norms of a cultural group) can lead to improper assumptions and stereotypes, disrespectful and discriminatory conduct. Our training programs educate court personnel about LGBT people and people living with HIV in order to reduce harmful bias, thereby increasing access to justice in the courts and improving public confidence because of more respectful, humane and fair treatment.

The Fair Courts Project is excited to organize trainings of trainers in cities around the U.S. in 2016 in order to replicate our judicial trainings in many more jurisdictions.

For more information on Lambda Legal’s Fair Courts Project please click here. To learn about your rights in court visit our new Know Your Rights in Court hub here. If you have experienced discrimination as a court user please contact our Help Desk at 866-542-8336.