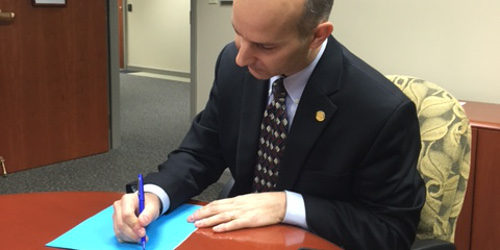 The legislation is being promoted by the grassroots organization Michigan Coalition for HIV Health and Safety.

“The coalition is excited to have the support and sponsorship of our modernization bill from eight of our Michigan state representatives, but we have a long way to go,” said Kelly Doyle, Coalition Manager. “We need activists and volunteers willing to talk to elected officials about the harm and threat to public health these laws are creating.”

Key to the modernization is a requirement that prosecutors and courts take into account current science about HIV transmission. Studies have shown that a person who is HIV-positive but successfully treating their infection with antiretroviral drugs so the virus is not detectable in their blood are extremely unlikely to transmit the infection. However, Michigan’s law currently does not allow this information as a defense.

Michigan’s law, passed in 1988, requires those who know they are infected with HIV to disclose that status prior to any sexual penetration, “however slight.” The law came out of a Republican House Task Force Report on AIDS in 1987 which wanted to stop those persons “who would deliberately or recklessly expose others to the infection.” Studies of the impact of Michigan’s law have found that behavior that is unlikely to transmit the infection has resulted in prosecutions. In addition, there appears to be a racial disparity in prosecutions focusing on black men who have sex with women. And finally, there is evidence that the law has become a weapon for domestic abusers as a way to control their intimate partners. Additional studies have found a small, but significant, minority of people at high risk for HIV infection are less likely to be tested for or discuss their risk for infection with medical providers because of such laws.

“This is an important modernization and is needed to protect the health and safety of everyone in Michigan,” said Hoadley. “Our laws are out of date. This effort would align our laws with modern HIV science, keep our communities safe and recognize the lived experiences of people living with HIV.”

Activists will lobby lawmakers again on Nov. 10 and Dec. 6 in Lansing from 9 a.m. to 4 p.m. each day. They will start the day at the ninth floor conference room of the House Office Building, 124 North Capital Ave., Lansing. For more information email Todd@MCHHS.info or visit MCHHS.info.