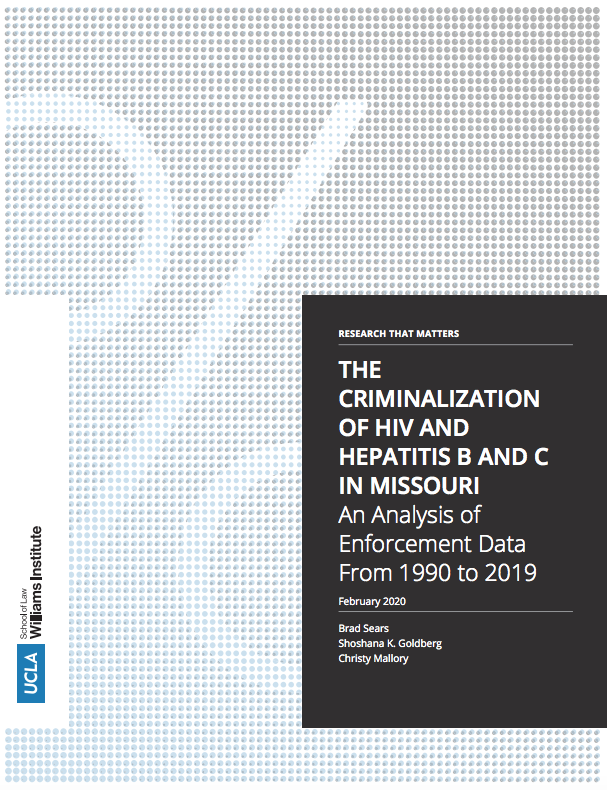 The cost of incarceration related to these crimes, to date, is $17.7 million.

Between 1990 and 2019, at least 593 people were arrested under Missouri laws that criminalize people living with HIV and hepatitis B and C, according to a new report by the Williams Institute at UCLA School of Law. Of those, 318 people were convicted for the crimes with average sentences ranging from 2.9 to 10 years. To date, the estimated cost of incarceration related to HIV/hepatitis crimes is $17.7 million.

Using data obtained from the Missouri State Highway Patrol (MSHP) – Criminal Justice Information Services, researchers found that HIV/hepatitis criminalization laws were enforced in 70 of Missouri’s 114 counties. However, enforcement was heavily concentrated in a smaller subset of counties. In addition, the report shows that HIV/hepatitis crimes are disproportionately enforced on the basis of race and sex, with Black men being the most likely to be arrested and convicted.

HIV/hepatitis criminalization is a term used to describe laws that either criminalize otherwise legal conduct or increase the penalties for illegal conduct based upon a person’s positive status. More than two-thirds of U.S. states and territories have enacted HIV criminal laws. Missouri has five laws that criminalize different types of exposure, including three HIV-specific laws and two laws for exposure to HIV or hepatitis in connection with the Department of Corrections and the Department of Mental Health (DOC/DMH).

“Violations of these laws are all felonies. They do not require that the defendant actually infect anyone—or intend to infect anyone—and they include behaviors that pose no or little risk of transmission,” said lead author Brad Sears, Distinguished Scholar of Law and Policy at the Williams Institute. “These laws are disproportionately enforced against already vulnerable communities and aren’t preventing the spread of HIV and hepatitis.”

Lawmakers in Missouri filed a bill in 2020 to revise the state’s HIV criminalization laws. A hearing on the bill is expected in March.

This study was funded through a generous grant from the Elton John AIDS Foundation.