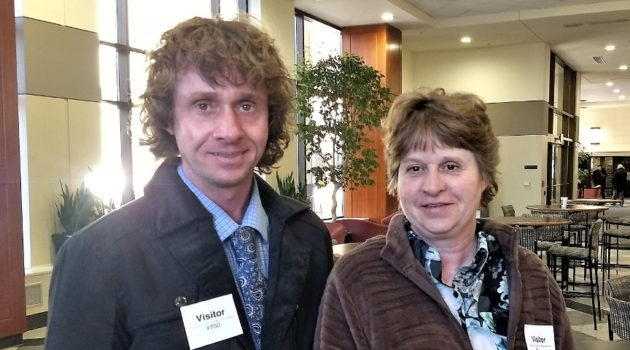 His mother, Teresa Perrin, has been by his side for the whole fight.

“It’s been a heartbreaking experience in what he’s gone through,” she said, “and not being able to get him out of it, and the way he was treated and the unfairness of it all.”

Both Perrin and Merithew were in Lansing last week to lobby lawmakers to change Michigan’s law. Iowa, California and Illinois have all modernized their laws in recent years.

Matthew Craig, coalition director for the Michigan Coalition for HIV Health and Safety, said having Merithew accompany the group in lobbying efforts to reform and modernize Michigan’s laws is important.

“As far as when it comes to a personal story and talking about Michigan’s HIV criminalization laws affect Michiganders, I think it’s important that we have people who have been affected badly by this law be able to speak to their own experiences,” he said. “Basically, our ability to translate to lawmakers and let them know that this is something we need them to change.”

Craig’s coalition is working with lawmakers to provide them basic HIV education while lobbying for the introduction of legislation to modernize the law to require prosecutors to prove the accused had an intent to transmit the virus, as well as engaged in behavior demonstrated to transmit it. Because right now, intent doesn’t have to proven for the accused to be sentenced.

In August of 2012, Merithew was finishing his studies to become a nurse. He lived in a Grand Rapids suburb, and used an app get into contact with Cook.

“Then, two days after, the police came to my door,” Merithew said. “Knocking on the door, asking all sorts of personal questions. I answered them truthfully. I willingly went down to the police station with this guy so that they could interrogate me. They basically chained me to the floor and,they sat there and interviewed me for over an hour or whatever after they let me sit there for a while and stew … I think it was the next day they came back and arrested me.”

Evidence used at trial, however, raised questions as to whether or not there was a disclosure of Merithew’s positive status. Merithew said that he was asked questions before the hookup via email and answered “yes” to each.

His accuser, Cook, had his own issues. At the time of the hookup he was a married man with a pregnant wife who worked to raise money for a local housing agency. Ironically, that agency also administered federal money for the Housing Opportunities for People with AIDS (HOPWA) program.

Despite having been on medications for years and maintaining an undetectable viral load, Merithew’s attorney, Christine Yared, was prevented by Kent County Circuit Court Judge James Redford from presenting any scientific evidence that he was incapable of transmitting the virus.

It still grinds now 37-year-old Merithew to this day.

“I mean, it’s just we live in the 21st century,” he said. “Science should be taken into account when it comes to medical-type laws.”

Before Merithew had a chance to confront his accuser in court, the local Fox News affiliate, Fox 17, revealed he had created an online profile on the same hookup app in violation of his bond terms. Judge Redford revoked Merithew’s bond and he was sent to jail.

“Yeah, there was some guy online actually (who) turned me into Fox 17 news,” he said. “And it was kind of creepy when my lawyer read after the fact, you know, who this guy was and basically said, ‘Yeah, I’ve known him for years, I’ve been following him for years.’”

And the media scrutiny didn’t stop there.

“That would be because Fox 17 news actually published my online profile picture, which was a full nude picture, on the 6 o’clock news,” he said. “So yes. The inmates were aware of what was going on. But in their minds, they saw it as I was intentionally trying to infect people, and so it’s just called perception. The general public’s idea of what HIV is, or what the criminal statute actually is.”

While in jail, Merithew would soon face more allegations promoted by the television station. He would stand accused of trying to infect other inmates with food.

“I was getting sandwiches with my meds and I don’t like bologna, so I was giving them away instead of throwing them in the garbage. This one guy who everybody was calling ‘Crackhead Joe,’ he would always go around saying, ‘I’m not a crack head,’ and, bang, he would hit his arm like that,” Merithew slapped his arm to indicate shooting up drugs. “He asked me, ‘Why are you giving these sandwiches to so-and-so?’ And I’m like, ‘Well do you want extra mayonnaise on it too?’ Just kind of getting him to go away, because he’s just being annoying. So he went around telling all the guys that I was trying to infect everybody by ejaculating on the sandwiches.”

According to Merithew, that attempt at getting his fellow inmate to leave him alone escalated unexpectedly and severely when others learned of his comment.

“The Bible-thumper fanatic came up to me that day and he tried to talk to me, but I was watching the news so I kind of just brushed him off,” Merithew said. “So he went and told the CO about the incident, and then he came and talked to me and they locked me in segregation.”

His attorney called the incident a “jailhouse joke,” but Judge Redford, according an MLive report, said the incident was like yelling fire in a crowded theater.

Prosecutors, under the direction of then Kent County Prosecutor William Forsyth, tried to get Merithew to plead guilty to one count of violating the state’s HIV disclosure law. When he refused, he received another count, this one for the oral sex he had had, as well as a felony charge of using a computer to commit a crime. He was found guilty on all three counts in May 2013, and in June of that year he was sentenced to a minimum of five years in prison.

The stigma around his virus followed Merithew past that incident. He was sent to prison in Jackson for processing after his sentence and was kept in solitary confinement for 45 days. Then, despite having a low security risk, he was sent to a maximum security facility – Ionia, Michigan.

“Basically, Kent County contacted the prison and said that I was gonna come to the prison and intentionally try to infect everybody with HIV,” he said. “So that was the reason that they locked me up,” Merithew said. “And, during that time, I was speaking to a psychologist that was there in the seg. unit. Basically, he told me that they were saying I was vindictive, and all of this other horrible stuff. He said (that) he didn’t see that, but they kept me there in segregation until they shipped me out.”

After time in Ionia, he was transferred to the prison in Adrian — a lower-security facility. Still, his HIV status traveled with him, and it reared its head while he was taking classes to learn how to work in food service. Someone asked Merithew to do the dishes although he wasn’t yet officially qualified to do so.

“And all the guys back there in the kitchen started throwing a fit, so I went back and the next day I didn’t have a call out for the culinary arts class,” he said. “So, I basically sent — they call them kites — a note to the instructor of the class asking him why I was taken out of this.”

Merithew said that the head of the vocational programs in the Michigan Department of Corrections, or MDOC, refused him based on his history in correctional institutions.

The MDOC has a history of rejecting HIV-positive inmates from accessing jobs in food service.

“A prison holds about 1,000 (to) 1,200 people and as those 1,000 prisoners go through for breakfast, lunch and dinner, prisoners are scooping that food onto their trays,” said MDOC’s spokesman Russ Marlan in a 2009 statement to Between The Lines. “So if a prisoner was HIV-positive and sneezed onto a food item and then a prisoner ate that food item and that prisoner had a lesion in their mouth, they could contract the disease.”

Marlan also used the concept of a prisoner bleeding on food as a potential for the spread of the virus.

“Say a prisoner cuts himself and his blood falls on a radish and somebody eats that radish and that he’s got an open lesion in his mouth. There’s a potential for him to contract that disease,” Marlan said. “As responsible corrections professionals dedicated to running a safe and secure prison system, we made the decision not to allow them (prisoners with HIV) to work in that area of prison operations.”

The department lifted that ban a year later, in 2010.

Merithew was paroled earlier this year, but he remains restricted. Because he was ordered to register as a sex offender, which the Michigan Sex Offender Registration Act does not require for his specific conviction, he’s prohibited from using computers and must wear an ankle monitor. Those restrictions even prevent him from enrolling in online classes.

Merithew’s accuser, Cook, declined to comment on this story.