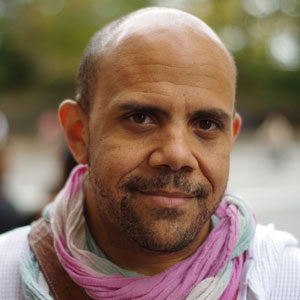 Journalist Steven Thrasher Reflects on HIV Criminalization, Race, and the Press on the Eve of Michael Johnson’s Announced Parole Decision

The story of Michael Johnson, a gay black wrestler who named himself “Tiger Mandingo” online, was the perfect storm of racism, homophobia, and the outdated HIV-phobia embodied in various laws criminalizing people with the virus for having sex. (Although the number of such laws is decreasing under pressure, they still exist in many states.)

From almost the beginning of the story in 2013, when Johnson was arrested in his dorm room, through the news last week that he will be paroled in 2019, New York-based journalist Steven Thrasher was virtually the only reporter to push past the prosecution’s press releases and talk directly to Johnson and others involved. The reporting, for Buzzfeed, resulted in a strikingly in-depth and complex look at the situation and the racial, sexual, and legal dynamics driving a trial that originally landed Johnson a 30-year sentence. (Here are all the stories, in chronological order: 1, 2, 3, 4, 5, 6, 7, 8, 9.)

TheBody talked to Thrasher, who is also a doctoral candidate in American Studies at New York University, about his four-year saga of covering Johnson’s case and what it says about how we have — and haven’t — changed when it comes to how we see race, sexuality, and HIV.

Tim Murphy: Have you talked to Michael Johnson since the parole (which won’t happen for another 18 months) was announced?

Steven Thrasher: I’ve talked to his friend in Indiana whom he’s going to be living with when he gets out. She’s lined up a part-time job for him in a warehouse; then, she’s going to help him get back into school. He actually is not allowed to go to public college for the first year. He’s 25 or 26 now. By the time he gets out, he’ll have served six years.

TM: How did you come onto the story in the first place?

ST: My editor Mark Schoofs at Buzzfeed put me on it. He said: “This black kid with HIV is being made out to be a black predator monster and nobody’s talked to him. Go to Missouri and talk to him.” The initial reporting on the case wasn’t reporting at all, but just rewrites of the prosecutor’s press releases, which were salacious. You see that happen a lot with legal stories about black, queer, or HIV-positive subjects, but it’s also a bigger problem in journalism.

TM: What are the big takeaways for you on this story?

ST: There are many. The biggest is that it puts HIV laws into the foreground and calls them into question. Many people, myself included, might first think that there could be some rational basis for these laws [that primarily criminalize people with HIV specifically for having sex without disclosing their HIV status to partners]. But it simply isn’t true. They’re at best ineffective and at worst harmful in terms of increasing HIV stigma and discouraging people from getting tested.

The story also shows, just like the story of the police murder of Michael Brown in Ferguson, that people don’t have to be “perfect” to rally around. [After receiving an HIV diagnosis, Johnson may or may not have disclosed his HIV status to multiple sex partners before having condomless sex — that much remains unclear.] Since this story began, the Black Lives Matter (BLM) movement has created a different way of standing up for people. We’ve had a long tradition from the mid-20th-century civil rights movement forward that people have to be the camera-ready ideal victims to rally around. The Michael Brown story said that all people are worth rallying around, and I feel that way about Michael Johnson.

The case focused on interracial sexual desire and how often the responsibility for it is offloaded completely onto black people. The bulk of Michael’s accusers were white and, in court, they speak almost entirely in passive language about their own role in the sexual exchange, the way that, historically, white women would be framed as innocent in any sort of sexual exchange they had with black men, saying it was rape. Or it being considered rape even if it were consensual.

The case also exposed this perception on the part of many HIV-negative people that the world has to keep them from becoming HIV positive, and all they have to do is ask, “Are you clean?” and that absolves them from having to use a condom or taking any other kind of preventive measure. Actually, everyone needs to work together to try to keep HIV rates down.

TM: It’s interesting that the story started before the widespread emergence of pre-exposure prophylaxis (PrEP) or even the growing understanding that someone with HIV on meds who is undetectable is also virtually unable to transmit the virus.

ST: There was no PrEP in Missouri at the time. But, I’m not sure that it would have made a difference. Michael Johnson probably wouldn’t have had access to it. [Even today, PrEP access among gay black men is comparatively low.

TM: Also, the campus of Lindenwood University appears to have had little-to-no sexual health or HIV/AIDS prevention resources. Condoms weren’t even for sale at the health center.

ST: Right. They might not even know about or be offering PrEP today. [I called the university’s health center and asked about “getting on PrEP for HIV,” and the woman who answered had no idea what I was talking about. So, Thrasher is likely right.]

TM: It is an open question, though, whether Johnson clearly told his sex partners that he was HIV positive before they had sex without a condom. Should there have been any legal action against him?

ST: I would say no. I don’t think law enforcement is an effective or appropriate tool for this issue. But also, the punishment should not have been anything like the original sentence of 30 years, or even the six years he’ll end up doing. It was completely out of proportion to what he did. There are shorter sentences in Missouri for murder. In California, the maximum sentence on an HIV criminalization charge is six months.

TM: Did you ever ask him why he had unprotected sex when he knew he was HIV positive?

ST: I don’t think I asked him that. He said on the record in court that he always told his partners. No one will know for sure what he said. He said to me that he never wanted to hurt anyone. When I asked him whether he knew who gave him HIV, he said he couldn’t say for sure but that he wouldn’t want to because he’d never want what happened to him to happen to anyone else.

TM: Do you think the media have gotten better at covering this kind of intersection of race, sex, and HIV since Johnson’s story broke?

ST: I think coverage on both race and HIV has gotten a lot better. Even just a few years ago, most reporting on anything racial was from an unselfconsciously white perspective. BLM has had a big impact, not just in terms of writing about race but forcing a reflection on the subjectivity, biases, and assumptions of reporters themselves.

TM: How do you think HIV coverage has improved?

ST: For a long time, the only gay thing that was making news was gay marriage, which doesn’t address any number of injustices and challenges that many LGBT people face.

But HIV/AIDS brings up sex, drug use, poverty, homelessness, structural racism — all very difficult things to write about. Coverage has gotten better because editors have given people like me the opportunity to cover this stuff, and BLM has increased the viability of reporters and advocates getting their stories through newsrooms. There’s been a consciousness-raising that marriage is not the entire story and that homophobia plays out in other ways in society. Look at Linda Villarosa’s New York Times Magazine cover story last summer on HIV rates among gay black men in the South.

I also think the [Centers for Disease Control and Prevention] releasing the stat in 2016 that one in two gay black men would get HIV really forced mainstream gay organizations to realize that this was more urgent.

I also think the emergence of PrEP has made HIV an issue that’s clearer and more compelling for HIV-negative people.

ST: He’s very sweet, very nice, gentle, and simple. He’s literal-minded. When I asked him how he got to college, he said, “I took the bus.” I’ve seen him in person a couple times a year the past few years, and he has no ill will toward anyone about this. He’s extremely sorry for everything that’s happened. He’s very smart about exercise and fitness and says he wants to become a personal trainer. I really learned that if there’s one thing reporters can do differently, it’s to actually talk to all the people involved in a story.

TM: What was it like working on the story for you, as a gay black man?

ST: It’s been hard at times and made me feel vulnerable. I hadn’t remembered that the prosecutor turned to the judge and said, “There’s a so-called journalist in the room, and I think he has an agenda, and I’ve asked the court to admonish him.” And the judge did. He told me not to talk to the jurors. It was frightening to have the bailiffs with their guns standing there, watching me intently.

I felt like I was watching a slow-motion lynching. I never thought Michael was without any responsibility in the situation, but he was still scapegoated by being made to carry responsibility for everyone in those sexual encounters. Watching that unfold, the legal violence of this kid maybe getting sent away for life was difficult.

But, if I hadn’t reported this story, then “Black Monster Spreads AIDS” is all the reporting that would have happened. My reporting got the interest of the ACLU and Lambda Legal. I kept pointing out how all the national gay organizations would have nothing to do with Michael. But then a group of nearly 100 black gay men wrote an open letter of support to Michael, and some of them started a GoFundMe that raised $25,000 toward the private lawyer that appealed his case on the basis of withheld evidence and got his sentence down to 10 years from 30.

And a separate group of HIV public health experts and faith leaders wrote a letter to the prosecutors asking for a more reasonable sentence for Michael that would not destroy his life. And now, he will be out of prison and able to restart his life in his mid-20s.

So, overall, despite how the story started, I’ve felt positive about how it all played out.

This transcript has been lightly edited for clarity.

Tim Murphy has been living with HIV since 2000 and writing about HIV activism, science and treatment since 1994. He writes for and has been a staffer at POZ, and writes for the New York Times, New York Magazine, Out Magazine, The Advocate, Details and many other publications. He is also the author of the NYC AIDS-era novel Christodora.