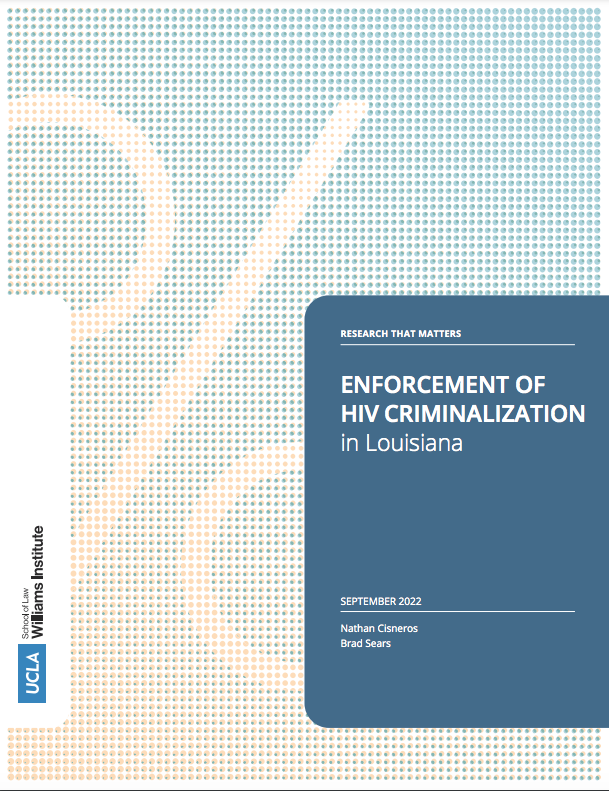 A new data interactive looks at the impact of HIV criminal laws on people living with HIV in nine states, including Louisiana

Since 2011, as many as 176 people have had contact with Louisiana’s criminal legal system because of allegations of HIV crimes, according to a new report by the Williams Institute at UCLA School of Law. HIV-related crimes are disproportionately enforced based on race and sex. In Louisiana, Black men represent 15% of the state population and 44% of people living with HIV, but 91% of those arrested for an HIV crime.

Using data obtained from the Louisiana Incident-Based Reporting System and from the state’s most populous parishes, researchers found that enforcement of HIV crimes is concentrated in East Baton Rouge Parish, Orleans Parish, and Calcasieu Parish. Furthermore, the number of HIV incidents—or interactions with law enforcement involving allegations of HIV crimes—is not declining over time.

HIV criminalization is a term used to describe laws that either criminalize otherwise legal conduct or increase the penalties for illegal conduct based upon a person’s HIV-positive status. Nearly two-thirds of U.S. states and territories currently have laws that criminalize people living with HIV.

A new data interactive looks at the impact of HIV criminal laws on people living with HIV in nine states, including Louisiana.

Louisiana has one criminal law related to HIV, which makes it a felony for a person who knows of their HIV-positive status to intentionally expose another person to HIV through sexual contact or other means without consent. The maximum sentence for an intentional exposure conviction is 10 years, and people convicted of an HIV crime are required to register on the state’s sex offender registry for at least 15 years.

Louisiana’s HIV criminal law does not require actual transmission, intent to transmit, or even the possibility of transmission to sustain a conviction. Between 2011 and 2022, incarceration for HIV crimes cost Louisiana at least $6.5 million.

“The cost of Louisiana’s HIV criminal law is likely much higher. Even with only partial access to the state’s criminal enforcement data, the trends were dramatic,” said lead author Nathan Cisneros, HIV Criminalization Analyst at the Williams Institute. “Louisiana’s HIV criminal law may undermine the state’s public health efforts by deterring the communities most impacted by HIV, including people of color and sex workers, from seeking testing and treatment.”

This report is part of a series of reports examining the ongoing impact of state HIV criminalization laws on people living with HIV. Take a look at our new data interactive summarizing the findings of our research.