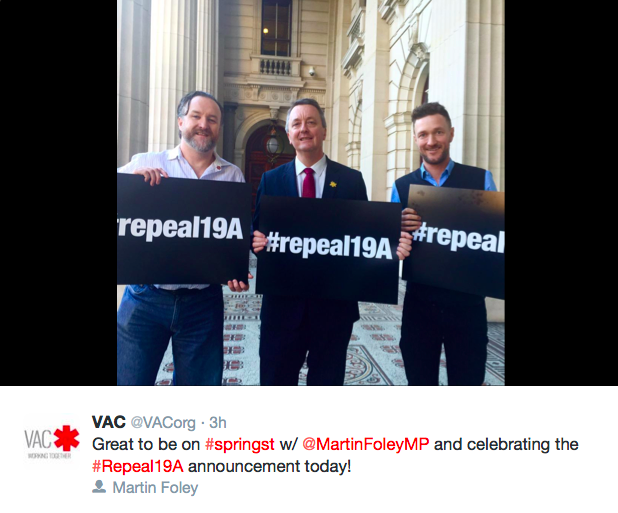 In a joint media release, Living Positive Victoria and the Victorian AIDS Council have welcomed the passage of the Crimes Amendment (Repeal of Section 19A) Act 2015 by the Victorian Parliament. The Act repeals Australia’s only HIV-specific law criminalising the intentional transmission of HIV, section 19A of the Crimes Act 1958, which has been criticised for unfairly targeting and stigmatising people with HIV.

Live Tweets from Victoria’s Parliament today. To find out more about the five year campaign to repeal the law, read this blog post written for the HIV Justice Network by Paul Kidd, Chair of the HIV Legal Working Group.

The two organisations had called for the repeal of section 19A in the lead-up to the 2014 International AIDS Conference, held in Melbourne, as part of an advocacy effort designed to reduce the incidence of HIV-related criminal prosecutions in Victoria.

“Victoria has the unfortunate distinction of having had more HIV-related prosecutions than any other state, and until today had the only HIV-specific criminal law,” said Simon Ruth, Chief Executive Officer, Victorian AIDS Council. “Our organisations strongly believe that HIV should be treated as a health issue, and that criminal prosecutions should only be used in cases where transmission occurs and there is evidence the alleged perpetrator acted with intent.”

The use of the criminal law to control HIV has been roundly criticised by legal theorists, HIV experts and international agencies. The Joint United Nations Program on HIV/AIDS has called for HIV-specific criminal laws, like section 19A, to be repealed.

“Today we can be proud that Victoria has repealed its HIV-specific criminal law, and in doing so, reaffirmed its commitment to treating HIV as a public health issue and not a criminal justice issue. Government, community and industry need to work together if we are to meet our goal of eliminating HIV transmissions by 2020, and the multi-party support for repealing section 19A shows our legislators are listening and prepared to enact evidence-based policies,” said Brent Allan, Chief Executive Officer, Living Positive Victoria.

“Criminalising HIV transmission and exposure isn’t just ineffective as a method of prevention, it is actually counterproductive to our efforts because it perpetuates stigma,” said Paul Kidd, Chair of the HIV Legal Working Group. “We know the stigma around HIV is one of the biggest barriers to increasing testing and treatment, and enabling voluntary disclosure of HIV. Section 19A sent a false message that people with HIV are a danger to the community, and todays repeal shows the Parliament accepts that we are not.

“This is a law that was never needed, and should never have been enacted. It has not made Victorians safer, and in fact may have led to an increase in the number of people living with HIV. The whole Victorian community should be happy to see it go.”

In a blog post written exclusively for the HIV Justice Network, Paul Kidd highlights that although this battle has been won, the work against unjust prosecutions in Victoria is yet not over.

“Now that section 19A is gone, our work continues, he writes. “We still need to address the unacceptably high number of prosecutions for ‘HIV endangerment’ that occur in Victoria. We strongly believe we have a model that will deliver the right public health outcomes while safeguarding the public, without the use of expensive, ineffective and highly stigmatising criminal prosecutions. With the repeal of section 19A, our state government has recommitted itself to a health-based response to HIV, and we believe that gives us the best possible platform to continue our campaign for prosecutorial guidelines.”