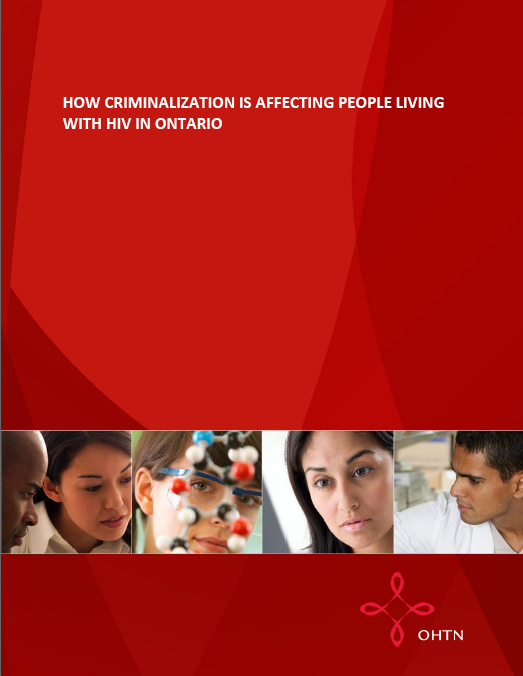 Last week’s devastating ruling of the Supreme Court of Canada was quick to dismiss evidence that that HIV criminalisation was damaging to public health.

“The only ‘evidence’ was studies presented by interveners suggesting that criminalization ‘probably’ acts as a deterrent to HIV testing,” wrote Chief Justice McLachlin. “The conclusions in these studies are tentative and the studies were not placed in evidence and not tested by cross-examination. They fail to provide an adequate basis to justify judicial reversal of the accepted place of the criminal law in this domain.”

And yet a few weeks earlier, a Canadian study was published that highlights exactly how the criminalisation of HIV non-disclosure is damaging public health.  It may not be possible to prove that it deters testing, but it certainly creates all kinds of problems for people living with, and at risk of, HIV.

The lead author of the study, How criminalization is affecting people living with HIV in Ontario is Professor Barry D. Adam, University Professor of Sociology at the University of Windsor, Ontario, and Senior Scientist and Director of Prevention Research at the Ontario HIV Treatment Network, Canada.

Drawing on results from the Ontario HIV Treatment Network Cohort Study, the Positive Places Healthy Places Cohort Study, and in-depth interviews with 122 HIV-positive people, the report examines how people living with HIV in Ontario perceive the law and the legal obligation to disclose their HIV-positive status to prospective sexual partners, as well as their perceptions of the changing public climate affected by the increasing prominence of criminal discourses applied to HIV.

The report shows how the criminal justice system and media coverage have created a climate of anxiety (though not all feel equally affected), affected views on when disclosure is (and is not) necessary, shaped messages from health professionals, and affected disclosure practices. The legal and media framing of HIV as a responsibility to disclose potentially undermines HIV prevention messaging and places ever greater numbers of people living with HIV in jeopardy.

Most study participants believed that disclosure of HIV-positive status should not be a legal requirement if protected sex is practiced. There was no significant variation in opinion by age, gender, sexual orientation, or ethnicity, but more educated respondents showed less punitive views.

The study’s primary finding is that that HIV criminalisation has unfairly shifted the burden of proof so that people living with HIV are held to be guilty until proven innocent and that:

In terms of general impact, many respondents reported a heightened sense of uncertainty, fear, or vulnerability, but others felt that the climate of acceptance is still better than in the early days of the epidemic, or that the prosecution of the high profile cases is justified and these people are giving all people with HIV a bad name.

To set the scene, in its introduction the report provides an extremely well-written exposition of why criminalisation HIV non-disclosure is problematic from a human rights, as well as a public health perspective. An edited version, below, provides you with a flavour of the insights.

The relationship between disclosure and HIV risk is complex at best… While some studies have found an association between disclosure and condom use, more have found no relationship…Disclosure poses a range of challenges in everyday social situations. The demand to disclose essentially requires HIV-positive people to place themselves in a situation to be rejected or stigmatized, a situation exacerbated in a climate of rising prosecution and media attention…

Ultimately reliance on disclosure makes sense as an HIV prevention measure only if both partners are certain of their serostatus, though epidemiologists point out that significant percentages of people who are HIV-positive do not know they are. In Canada, an estimated 26 percent of people infected with HIV are unaware of this fact. Indeed some researchers contend that transmission by those unaware of their infection accounts for a significant portion of new infections. Criminal prosecutions for non-disclosure encourage at-risk persons to rely on prospective sex partners to disclose their HIV status, if positive, and to assume that there is no or minimal risk in the absence of positive serostatus disclosure, evident in complainants’ testimony at trial in such cases. Serostatus disclosure laws may thus foster a false sense of security among HIV-negative persons who may default to forgoing safer sex unless notified of their partners’ HIV-positive status. Reliance on disclosure, then, is a shaky foundation for HIV avoidance. By absolving people of responsibility for practising safer sex, it may even increase vulnerability to infection.

Disclosure, then, is often challenging to accomplish in everyday life and the research evidence shows that disclosure is far from reliable as a method of avoiding HIV. The accumulation and consolidation of a body of legal doctrine that rests primarily on an obligation to disclose by those who know they are HIV-positive raises a number of problems in the pursuit of effective public policy in HIV prevention. There is, then, a need to test the presuppositions underlying the legal obligation to disclose as an HIV prevention strategy and to examine the real effects of criminalizing non-disclosure on people living with HIV.

Towards the end of the report, the authors discuss the impact of criminalisation of HIV non-disclosure on public health. Again an edited version, below, provides you with a flavour of the insights.

In Canada in recent years, the state has been shifting resources from social services to law enforcement… In HIV, the prosecutorial arm of the state has expanded while support for ASOs and for HIV prevention has become increasingly tenuous. The move on the part of some attorneys general to press for more punitive solutions to HIV prevention has many pitfalls and unintended consequences that amount, in the long run, to a public policy with poor prospects for meaningful reduction in HIV transmission combined with real damage to the lives and well-being of [people living with HIV]. Indeed obsessive focus on disclosure may create the conditions of accelerated transmission if people abandon safe sex in favour of disclosure as the preferred method of HIV avoidance…

Criminalization, whether minimal or expansive in punitive scope, has little potential to slow the advance of the HIV epidemic and has considerable potential to undermine prevention efforts currently under way….At the same time, increasing reliance on the criminal justice system to enforce a principle of universal disclosure of HIV-positive status, regardless of the likelihood of transmission, presses [people living with HIV] into an untenable double bind: they must place themselves into the risky position of heightening the possibility of rejection, stigmatization, and prosecution. Double binds can scarcely be the foundation for realistic public policy or consistent practice among [people living with HIV]. Only decriminalization and destigmatization would begin to create the conditions to make disclosure of sero-status safe. But perhaps more importantly, disclosure has been shown to be an unreliable method of reducing HIV transmission. Obscured by the criminalization debates is the fact that protected sex, especially in a situation where treatment has succeeded in attaining an undetectable viral load in the HIV-positive partner, continues to be a much more reliable method of avoiding HIV (as well as several other sexually transmitted infections).

It is interesting to note that the Supreme Court has, at least, recognised this last observation.  However, the reality of the ruling is that it states very clearly that disclosure alone is enough to negate criminal liability (notwithstanding difficulties of proving that this occurred). It also very worringly undermines safer sex messaging by stating that condoms alone (or low viral load alone) are not ‘safe’ enough.

The study concludes with the following recommendations: