This selection of posters presented in Vienna follows up from my previous AIDS 2010 posting on the sessions, meetings and media reporting that took place during last month’s XVIII International AIDS Conference.  I’ll be a highlighting a few others in later blog posts, but for now here’s three posters that highlight how the law discriminates; why non-disclosure is problematic to criminalise; and how political advocacy can sometimes yield positive change.

In Who gets prosecuted? A review of HIV transmission and exposure cases in Austria, England, Sweden and Switzerland, (THPE1012) Robert James examines which people and which communicable diseases came to the attention of the criminal justice system in four European countries, and concludes: “Men were more likely than women to be prosecuted for HIV exposure or transmission under criminal laws in Sweden, Switzerland and the UK. The majority of cases in Austria involved the prosecution of female sex workers. Migrants from southern and west African countries were the first people prosecuted in Sweden and England but home nationals have now become the largest group prosecuted in both countries. Even in countries without HIV specific criminal laws, people with HIV have been prosecuted more often than people with more common contagious diseases.”Download the pdf here.

In Responsibilities, Significant Risks and Legal Repercussions: Interviews with gay men as complex knowledge-exchange sites for scientific and legal information about HIV (THPE1015), Daniel Grace and Josephine MacIntosh from Canada interviewed 55 gay men, some of whom were living with HIV, to explore issues related to the criminalisation of non-disclosure, notably responsibilities, significant risks and legal repercussions. Their findings highlight why gay men believe that disclosure is both important and highly problematic. Download the pdf here. 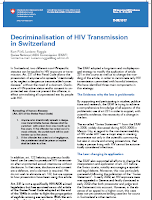 In Decriminalisation of HIV transmission in Switzerland (THPE1017), Luciano Ruggia and Kurt Pärli of the Swiss National AIDS Commission (EKAF) – the Swiss statement people – describe how they have been working behind the scenes to modify Article 231 of the Swiss Penal Code which allows for the prosecution by the police of anyone who allegedly spreads “intentionally or by neglect a dangerous transmissible human disease” without the need of a complainant. Disclosure of HIV-positive status and/or consent to unprotected sex does not preclude this being an offence, in effect criminalising all unprotected sex by people with HIV. Since 1989, there have been 39 prosecutions and 26 convictions under this law. A new Law on Epidemics removes Article 231, leaving only intentional transmission as a criminal offence, and will be deabted before the Swiss Parliament next year. Download the pdf here.