The next few weeks sees my involvement in a flurry of anti-criminalisation advocacy in the United States and Canada, coinciding with the publication of the book version of the new international resource I produced for NAM and an article in HIV Treatment Update summarising the current global situation.

HIV and the Criminal Law

Preface by The Hon. Michael Kirby AC CMG and Edwin Cameron, Justice of the Constitutional Court of South Africa.

Introduction How this resource addresses the criminalisation of HIV exposure and transmission.

Fundamentals An overview of the global HIV pandemic, and the role of human rights and the law in the international response to HIV.

Laws A  history of the criminalisation of HIV exposure and transmission, and a brief explanation of the kinds of laws used to do this.

Harm Considers the actual and perceived impact of HIV on wellbeing, how these inform legislation and the legal construction of HIV-related harm.

Risk An examination of prosecuted behaviours, using scientific evidence to determine actual risk, and how this evidence has been applied in jurisdictions worldwide.

Proof Foreseeability, intent, causality and consent are key elements in establishing criminal culpability. The challenges and practice in proving these in HIV exposure and transmission cases.

Impact An assessment of the impact of criminalisation and HIV – on individuals, communities, countries and the course of the global HIV epidemic.

Details: international resource and individual country data A summary of laws, prosecutions and responses to criminalisation of HIV exposure or transmission internationally, and key sources of more information.

The August/September issue of NAM’s newsletter, HIV Treatment Update, features a 2500 word article, ‘Where HIV is a Crime, Not Just a Virus’, that examines the current state of criminalisation internationally. 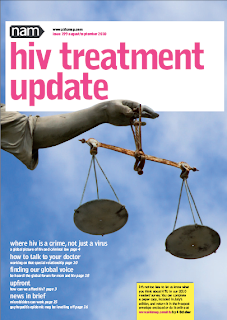 Since 1987, when prosecutions in Germany, Sweden and the United States were first recorded, an increasing number of countries around the world have applied existing criminal statutes or created HIV-specific criminal laws to prosecute people living with HIV who have, or are believed to have, put others at risk of acquiring HIV.

Most of the prosecutions have been for consensual sexual acts, with a minority for behaviour such as biting and spitting.

In the majority of these cases, HIV transmission did not occur; rather, someone was exposed to the risk of acquiring HIV without expressly being informed by the person living with HIV that there was a risk of HIV exposure.

In the cases where someone did test positive for HIV, proof that the defendant intended to harm them and/or was the source of the infection has often been less than satisfactory.

South Africa’s openly HIV-positive Constitutional Court Justice, Edwin Cameron, called for a global campaign against criminalisation at the 17th International AIDS Conference in Mexico City in 2008, declaring: “HIV is a virus, not a crime.”

Two years later, the discussion for people working in the HIV sector has moved on from a debate about whether such laws and prosecutions are good or bad public policy to one on how to turn the tide and mitigate the harm of criminalisation. Most of them advocate, in the long term, for decriminalisation of all acts other than clearly intentional HIV transmission. This, however, is a debate that many people outside the HIV sector have yet to even start.

Next Tuesday, September 21st, I’ll be joining a group of US anti-criminalisation advocates for a meeting in New York to discuss how to move towards mitigating the harm of US disclosure laws and prosecutions for HIV exposure and non-intentional transmission.

The goals of the Positive Justice Project campaign include:

I’ll be in Canada’s capital, Ottawa, on Wednesday September 29th to speak about my experiences of blogging on criminalisation worldwide, and to provide examples of international anti-criminalisation advocacy that Canadian advocates might find useful in their fight against the ramping up of charges for non-disclosure and the irrational and scare-mongering response to accusations of non-disclosure from law enforcement.

Ottawa has become ground zero for anti-criminalisation advocacy in recent months following the arrest and public naming and shaming of a gay man for non-disclosure. Following community outrage at the man’s treatment, the Ottawa Police Service Board rejected calls to develop guidelines for prosecution for HIV non-disclosure cases.

I hope to meet any blog readers who can make it to either of the Canadian meetings, and will, of course, be posting more about these meetings in the future.