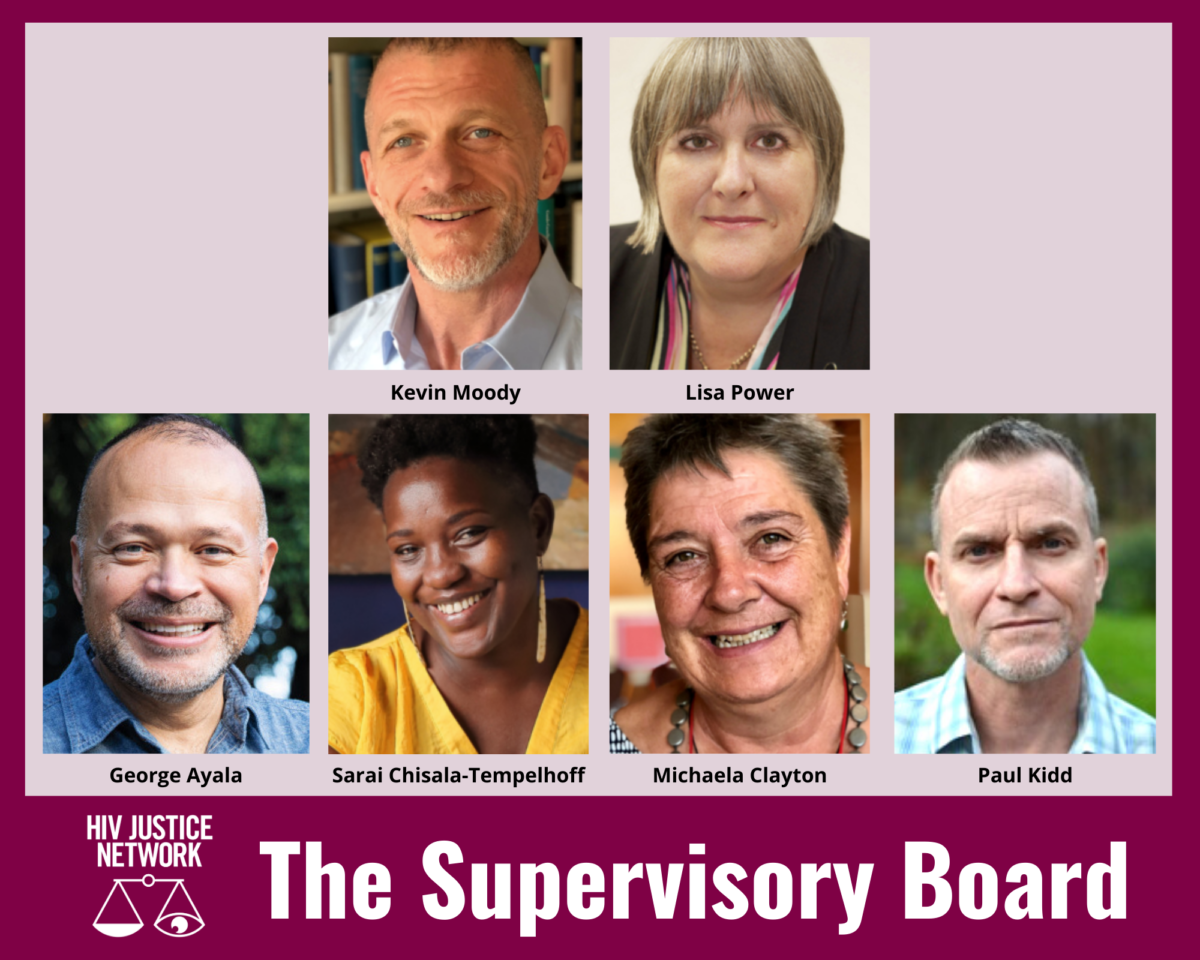 The HIV Justice Network (HJN) is delighted to announce a number of significant changes to its Supervisory Board.

Following a joint meeting of the Supervisory and Management Boards earlier this month, Kevin Moody was appointed as the new Chair of the Supervisory Board, taking over from Lisa Power who stepped down after almost four years as the “start-up” Chair.

“Like all organisations that want to survive it’s vital that HJN grows and changes to meet an ever-changing world, the changing faces of HIV and the stigma that leads to criminalisation,” said Ms Power. “I’m very confident in handing over to Kevin Moody (as Chair) that this will continue. I think the greatest challenge in the next decade is to engage and enthuse the newer generations of people with HIV and allies to continue the fight; to challenge inappropriate, unfair and often intersecting laws and those who enforce them without heed to human rights, science and common sense.”

Mr Moody, who was appointed to the Supervisory Board in September 2020, is an independent consultant working on evidence-based research, policy and programming to support the development of person-centred initiatives to improve the health and quality of life of people living with and affected by HIV. A former CEO of the Global Network of People Living with HIV (GNP+), he has previously worked with the World Health Organization and Médecins sans Frontières.

Mr Moody said he was excited to Chair the Supervisory Board as “it is an opportunity to work with incredibly talented people at HJN. I hope to support the continued development and success of HJN as it works globally to eliminate the unjust regulation, control and punishment of people living with HIV.”

In addition HJN welcomed three new members to the Supervisory Board this month, including former founding Director of the AIDS and Rights Alliance for Southern Africa (ARASA), Michaela Clayton who was elected Treasurer; George Ayala, Deputy Director of the Alameda County Public Health Department and the former Executive Director of MPact Global Action for Gay Men’s Health and Rights; and Sarai Chisala-Tempelhoff, a Malawian human rights lawyer and a legal researcher with over 15 years of experience in women’s access to justice. Australian lawyer and activist, Paul Kidd, will continue in his role as Secretary.

Ms Chisala-Tempelhoff said she ‘felt at home’ with her new role. “I am celebrating my new role serving HJN on the Supervisory Board! HIV decriminalisation has been my passion and research focus since I wrote my undergrad dissertation on this two decades ago! This role and this organisation feel like home.”

Lisa Power, as outgoing Chair, will remain on the Supervisory Board as a member without portfolio. Reflecting on her term as Chair, Ms Power said, “The great public achievement of HJN in the past few years has been the Expert Consensus Statement, but I think the most notable feature of HJN – and this is down to [Executive Director, and sole Management Board member] Edwin J Bernard’s leadership – is the universal regard for the organisation and its work in a very difficult and often fraught field, which has been a constant. All I did was give Edwin the space to create while being a sounding board for his concerns as he steered HJN from being one man with a very bright idea to a solid organisation.”

You can read more about the Supervisory Board here.