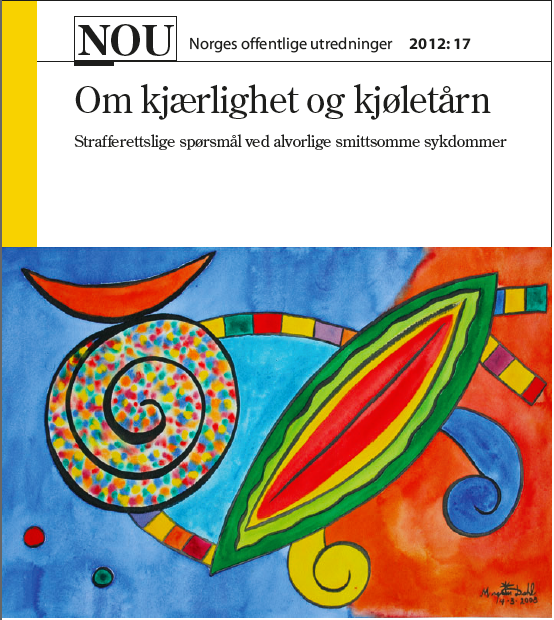 The long-awaited report from the Norwegian Law Commission, released last Friday, has shocked and disappointed HIV and human rights advocates in Norway and around the world.

After spending almost two years examining every aspect of the use of the criminal law to punish and regulate people with communicable diseases (with a specific focus on HIV) the Commission has recommended that Norway continues to essentially criminalise all unprotected sex by people living with HIV regardless of the actual risk of HIV exposure and regardless of whether or not there was intent to harm.  The only defence written into the new draft law is for the HIV-negative partner to give full and informed consent to unprotected sex that is witnessed by a healthcare professional.

As highlighted in this news story from NAM, low or undetectable viral load will provide no defence to “exposure” charges (although the Commission has recommended that it may be a mitigating fact during sentencing). However, in contrast to the recent Supreme Court of Canada ruling, condoms alone will continue to suffice as a defence.

Given the importance of this report – and its many internal inconsistencies that result in a recommendation for a new law that will actually make it easier to prosecute people with HIV for low- (or no-) risk sex, such as the current oral sex prosecution of Louis Gay  –  I will be writing a series of stories examining different aspects.  In the coming days, there will detailed analysis of the Commissions’ report from Professor Matthew Weait as well as an interview with the dissenting Commission member, Kim Fangen.

Since the first prosecution in 1995, Norway has been using a 110 year-old law to prosecute potential or perceived HIV exposure or HIV transmission, which has the the primary aim of protecting public health.

With the exception of one prosecution each for hepatitis B and hepatitis C transmission, the law has only been used in relation to HIV, and so consequently, paragraph 155 of the Norwegian Penal Code is usually referred to as ‘the HIV paragraph’. There is no consent nor ‘safer sex’ defence in this law, which essentially criminalises all sex by people with HIV.

A new penal code was adopted in 2005 that added a consent defence for “spouses” or other couples living together on a steady basis –  and the discussion text further noted that condom use should also be a defence.  However, this has not been enacted due to its being roundly criticised by many HIV and human rights groups in Norway and beyond – including by South African Constitutional Court Justice, Edwin Cameron – as being overly draconian and hypocritical given Norway’s role as an arbiter and defender of international human rights.

Consequently, in December 2010, the Norwegian Government appointed a law commission on penal code and communicable diseases to assess whether or not a criminal law was necessary, and if so, what should be criminalised. The Commission consisted of 12 members, including medical and legal practitioners, scientists and academics with backgrounds in sexuality, ethics and human rights, as well as one HIV activist, Kim Fangen.

Kim spoke about the work of Commission – and its potential impact – at the recent international conference on the criminalisation of HIV non-disclosure, potential or perceived HIV exposure and non-intentional HIV transmission that took place in Berlin. The meeting was co-organised by the European AIDS-Treatment Group (EATG), Deutsche AIDS-Hilfe (DAH), the International Planned Parenthood Federation (IPPF), and HIV in Europe.

At the meeting, Kim noted: “It surprised the Commission and many others that people are still being prosecuted under this paragraph [155] when another paragraph was adopted…in 2005. The usual practice in Norway [and elsewhere] is to take into consideration the revised and adopted paragraph even if it’s not yet in force.”

The Commission met twelve times for up to three days at a time, and consulted with national and international experts on HIV and the law along with government representatives, health organisations, and people living with HIV. Some Commission members also participated in the UNAIDS expert meeting on HIV and the criminal law in Geneva, in August/September 2011, as well as the the high level international consultation on HIV and the criminal law held in Oslo in February 2012, which coincided with the Oslo Declaration meeting where two Commission members were present.

In other words, the Commission had every possible opportunity to come up with a report that would result in Norway leading the world in terms of a rational, proportionate, ethical and just response that balances public health with human rights.  Instead – with the exception of Kim Fangen – they opted for the most conservative outcome possible, that appears to ignore much of the legal and scientific expertise presented to it, in favour of a law that they believe will act as a deterrent to risky sex and normalise the long-standing Norwegian traditional of promoting monogamous sexual relationships for procreation.

As expected, the report is long and detailed, and covers many aspects of regulating issues that have an impact on the public health.  A substantial English-language summary is available. I have reproduced a summary (of summaries) of the Commission’s recommendations as they relate to HIV (and ostensibly other sexually transmitted infections) below.

The 11 other members find it clearly most appropriate to have a separate penal provision on direct and indirect person-to-person transmission of serious communicable diseases, including through sexual intercourse. This is proposed in the draft of section 237 on transmission of infection in the 2005 Penal Code. A separate provision of this nature makes it possible to introduce, in the text of the statute, impunity in cases where responsible behaviour has been displayed in terms of communicable disease control, and to establish rules for when consent will exempt a person from criminal liability. It is proposed that the threat of criminal prosecution should target the act of transmitting a communicable disease that causes significant harm to body or health, as well as blameworthy conduct that results in exposure of another person to the risk of being infected with such a disease.

Of these 11 members, a minority of two is in favour of a penalty only being applicable when infection is transmitted. The other nine members are of the opinion that the act of exposing another person to the risk of infection should also be punishable when the behaviour in question is blameworthy («on repeated occasions or through reckless behaviour») from the perspective of communicable disease control. This is also warranted for evidentiary reasons.

It is proposed that the threat of criminal sanctions for direct and indirect person-to-person transmission of infection should only apply to intentional and grossly negligent acts, contrary to section 155 of the 1902 Penal Code and section 237 of the 2005 Penal Code, which also cover simple negligence. The draft statute states that no penalty is applicable when proper infection control measures (such as use of a condom in connection with sexual intercourse) have been observed. Nor is a penalty applicable in the case of transmission of infection in connection with sexual activity when the person who has been infected or exposed to the risk of infection has given prior consent in the presence of health care personnel in connection with infection control counselling.

The special comments to the draft statute point out that the prosecuting authority should show restraint in cases of infection transmitted from mother to child, in connection with the use of shared injection equipment among drug users, in connection with sex work and between two infected persons, particularly when both of them are aware of their own and their partner’s infection status.

The proposal entails a certain decriminalisation and reduced criminalisation in relation to the current section 155, and a clarification of when penalties are not applicable. It is proposed that the penalty level be reduced somewhat. The current maximum penalty (six years’ imprisonment) is only to be maintained for aggravated transmission of infection, which will primarily apply in cases where the transmission of infection has caused loss of life, the infection was transmitted to two or more persons, or transmitted as a result of “particularly reckless behaviour”.

The report’s recommendations are just that – recommendations – and the final outcome may be very different.  The process will take a further 18 months, and won’t be finalised until  2014.

In the coming months, the Ministry of Health and Care Services will, together with the Ministry of Justice and Public Security, thoroughly examine the report and recommendations which is classified as an ONR – Official Norwegian Report.

They will then produce an open hearing letter which will allow for further comment.

It is entirely possible that the Government may ignore these recommendations completely.

In July, two prominent and influential MPs, Håkon Haugli (Labour) and Bent Høie (Conservative) came out in favour of no replacement for Paragraph 155.

If both parties support their positions, there would be a firm majority in Parliament to ignore the Commission’s recommendation and, instead, to repeal article 155 (and its 2005 replacements) and pass no new law at all.

As the experience of its Nordic neighbour, Denmark, has shown, the sky does not fall in – risky sex and new infections do not increase – when there is no law governing the behaviour of people with HIV, because, as numerous studies have found, the vast majority of people living with HIV are responsible; their behaviour is not influenced by criminal law; and most new infections emanate from undiagnosed HIV.