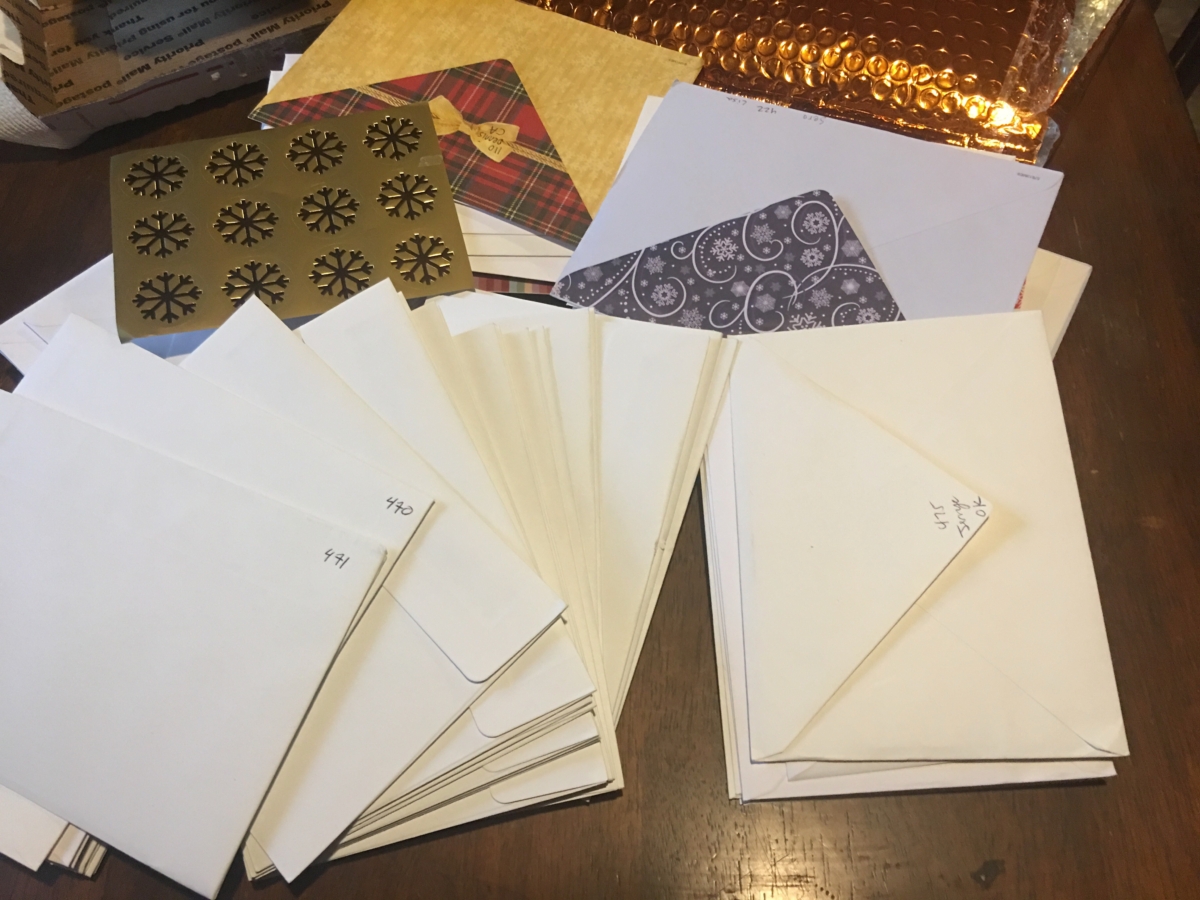 In an era where the term ‘lockdown’ is used to limit our movements, spare a thought for the many prisoners living with HIV (some of whom have been unjustly convicted under HIV criminalisation laws) who are experiencing real lockdowns and severe isolation.

With community support interventions becoming increasingly formalised, and NGOs pushed to operate in terms of strategic plans, deliverables, outputs and outcomes, Sero’s Holiday Card Project stands as a rare example of an organisation recognising the worth of a project focused solely on gestures of basic human kindness.

Last year, the project delivered Holiday cards to around 900 incarcerated people, most of whom are living with HIV. For some, it was the only mail they received all year.

So how did the Holiday Card Project come to be, has it made a difference, and how can you help this year?

Back in the 1980s and ’90s, Cindy Stine lost a lot of friends to HIV. In 1996, just before effective treatments became available, she lost a close friend who was like a son. She made a promise to him that she would continue to be involved in the AIDS response. That’s a promise she’s kept.

In 2011, Cindy was serving on the board of a local LGBT centre when she invited two speakers from the fledgling Sero Project to speak at an event. The speakers were Sean Strub, Sero’s Executive Director, and Robert Suttle. Sean introduced the audience to the concept of HIV criminalisation, a new issue for most, including Cindy. Robert talked about what it means to live as an HIV criminalisation survivor, explaining that as the result of an HIV non-disclosure charge, he served six months in the Louisiana state prison and would be registered as a sex offender for 15 years. Robert showed an image of his driver’s license, with ‘sex offender’ stamped in bold red lettering: ID he has to show often and in many different circumstances.

Cindy approached Sean and Robert to let them know that she wanted to help. A few days later, Sean rang Cindy and invited her to his office where he showed her a stack of letters that Sero had received from people in prison. Sean asked Cindy if she’d volunteer to take on the task of answering the letters. She agreed.

Things could have ended there, with Cindy answering people’s individual letters, but as Cindy read those letters week after week, each letter more heart-breaking than the last, she began to really appreciate the isolation, loneliness and desperate need for connection experienced by many of those inside. She talked it over with her Sero colleagues, and they decided their efforts to build a movement against HIV criminalisation needed to expand to be more inclusive of those who were incarcerated; those directly impacted by HIV criminalisation. They decided to explore how they could support development of a prisoners’ network, starting by compiling a database of contact details of those who’d written.

As Sero grew, Cindy was employed to take on community education and other projects but her work answering prisoners’ letters continued. Cindy says of those letters, “sometimes the people writing didn’t even have access to paper, so they’d write on any scrap of paper they could find – recycled envelopes or bits of paper torn off something else. Many of those sending letters weren’t really literate but they wanted to communicate.”

As the 2015 Holiday season approached, Cindy found the letters got harder to read. “A lot of people wrote about loneliness and about their families disowning them after finding out they had HIV, or were gay, or were transgender. People felt they’d been thrown away and forgotten.” Then she had a simple thought, “Wouldn’t it be nice for them to know that they’re not alone.” Then another, “We should send Holiday cards”. She took the idea to Sean, who agreed.

By then, Cindy’s database was so large that she realised Sero would need to prioritise who got cards, focusing on those who were incarcerated as a result of HIV, or they had HIV or another debilitating illness. Cindy also wanted to ensure each person got at least three or four cards but … how to go about it? Cindy put out a call to the 900 or so people on the Sero list-serve asking if anyone was interested in writing some Holiday cards. The response was overwhelming. Many offered to help, with some asking to do 20 cards, some asking to do 200.

The Holiday Card Project has continued each year since then. People express an interest, Cindy sends them a list of first names; they write message on the cards, put them in blank envelopes and return them to Sero; Cindy sorts them, addresses them, and mails them off.

Those who write cards come from all different parts of the community, including some working in other HIV advocacy organisations, some parents of prisoners, and some people living with HIV. People are asked not to ask personal questions but to write messages of support: things like ‘hope you’re doing well’, ‘we’re thinking of you’, and ‘you’re not forgotten’. Some write about themselves, their experience living with HIV, their thoughts and prayers. Some write, ‘we’re thinking of you when we fight HIV criminalisation’.

One group gets together and spends a day each year writing Holiday cards. People come from all over, saying it feels really good coming into a non-judgemental space and writing messages from the heart. Sometimes Sero will set up a table at a conference and invite people to write cards. Others write cards at home. People feel involved. Each step in the process has meaning: the choice of card, the choice of words, with many people sending their cards with stamps to send them on, to further support the project.

Last Holiday season, about 900 people received cards in facilities across the US, including people on death row. The responses from those who received cards is humbling. Some said, it was the only card they’d received all year, but those cards meant that they knew they were not forgotten. They couldn’t describe the feeling of hearing someone from the mailroom say, ‘You’ve got mail’. They knew that somebody out there had thought enough of them to send a card. Recently Cindy received a letter from a man who’s recently been released. He said that for the last three years he’d so looked forward to those cards as it was the only mail he got. It meant a lot that people had taken the time to write.

The project is not without its challenges. Cindy spends considerable time keeping track of people, as prisoners are often moved. There are also major issues regarding mail screening. Although Cindy has worked to build a rapport with those managing mail distribution at many of the prisons, that hasn’t guaranteed mail is always received. Mail screening rules differ from state to state, institution to institution, and the rules keep changing. Some prisons have now banned cards altogether, some won’t allow glue or glitter or coloured paper, etc. If mail is considered contraband it may be thrown out or returned to Sero. That process has at times driven Cindy to photocopy returned cards, sending the copies in the hope the person will still receive the good wishes.

The Holiday Card Project may have modest goals – to show compassion and care to those who feel abandoned, but it has delivered far more. It has made a difference to the lives of many, letting them know that there are people outside of prison ready to provide support. It has raised awareness about HIV criminalisation and provided a mechanism for people to show they care. It has also helped build trust between prisoners and Sero, a facor that has proven critical to the development of a stronger prisoners’ network and greater engagement with Sero. A stronger prisoners’ network has meant more support for those inside, and it has also resulted in other great projects, like Turn It Up, the health magazine that includes information about HIV for those in prison, largely written by people who are, or have been, incarcerated.

While Sero is best known for its HIV criminalisation reform programmes, its efforts to support network building and empowerment have proven equally important. Sero operates from the belief that those most directly impacted should be at the centre of this work, which is why facilitating the creation and strengthening of networks of People Living with HIV and allies, particularly those representing key populations, remains critical and a priority.

Every year the Holiday Card Project has grown, with prisoners writing to Cindy to let her know if they’ve been moved to another facility. Others write saying, “a friend of mine got cards. Can I be put on the list?” Parents get in touch too, asking for their children to be added to the list, and also writing letters of thanks for cards received.

Still, Cindy thinks there is room for the project to grow; sending cards for holidays celebrated by other religions at other times of the year, and also considering whether cards could be sent for some non-religious events, such as Halloween or Thanksgiving. That way the project can become more inclusive and people won’t have to wait an entire year for mail. Of course, that will mean attracting more people to write cards so that more people can receive them.