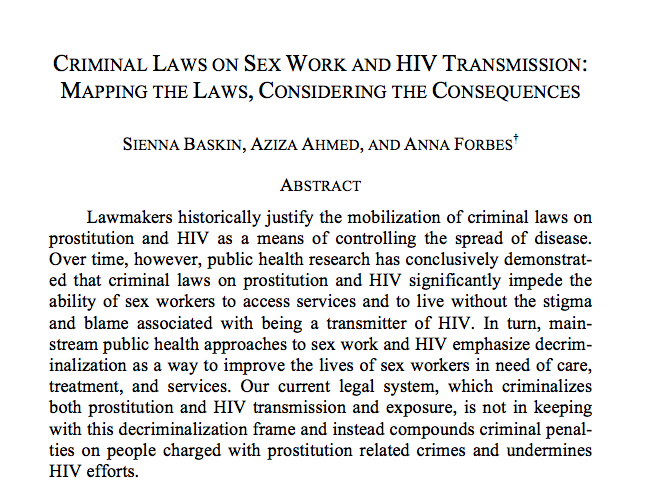 In this article, authors Sienna Baskin, Aziza Ahmed, and Anna Forbes examine the interlocking webs of anti-prostitution laws and HIV criminalisation. Throughout the piece, the authors demonstrate critical research ethics by taking, as their starting point, the lives, freedom, and dignity of sex workers living with HIV.

Baskin et al. describe the ways in which, for sex workers, criminalisation is about so much more than the simple existence of laws. Instead, it is the particular policing and prosecutorial practices in a jurisdiction, based on the laws in place, that shape the lives of sex workers.

The authors detail the consequences of arrest and prosecution that are frequently ignored in discussions of the criminal laws, including violence at the hands of police and fellow inmates, costly fees, possible loss of custody of one’s children, loss of employment and housing, and even loss of the right to sue police for violence that the police enact against sex workers in custody.

When HIV ‘exposure’ is also a crime in a state, then the legal penalties for sex work become even more harmful. If a sex worker is living with HIV, then she or he more often faces a felony rather than misdemeanor charge.

Baskin et al. find tremendous variety in the legislation from differences in when and how mandatory testing is conducted, to whom HIV test results are revealed, to how the results are used in court.

Of the approximately 32 U.S. states that criminalise HIV ‘exposure’, 14 have specific penalties for HIV-positive sex workers. Eleven states require mandatory HIV testing of sex workers and have enhanced sex work penalties for those living with HIV. Further, those prosecuted for sex work while living with HIV can be prosecuted under general (non HIV-specific) laws in any state.

To be prosecuted in eight states, sexual contact need never occur. People need only to be considered to be “loitering” or to make an offer for sexual services. In ten states, laws mandate testing of those prosecuted for sex work and provide enhanced penalties for those who engage in sex work who are living with HIV. In these states, any arrest after the first arrest (and related mandatory testing) leads to an almost automatic conviction. The HIV testing results become part of the person’s court files.

Noting that, 30 years into the HIV epidemic, there is no evidence that criminal law approaches have any positive effect on HIV prevention, the authors contend that criminalising sex work serves only to harm and discriminate against vulnerable populations and to perpetuate the HIV epidemic.