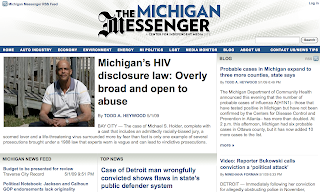 Here’s a truly excellent, and sobering, article from the Michigan Messenger – an independently-produced political news daily featuring original and investigative reporting – that spells out in an interview with an African-Amercian man convicted under the state’s HIV exposure law – just how these laws are open to abuse, both by individuals and the criminal justice system itself.

In brief, Michael S. Holder was accused of not disclosing his status before having sex by his (white) ex-girlfriend. Five members of the jury admitted during jury selection that they were prejudiced either against inter-racial relationships or against African-American men, but were allowed to remain on the jury. The complainant retracted her original testimony on the stand, and admitted that Mr Holder had, in fact, disclosed his HIV status before they had sex.

On Dec. 3, 2001, the jury of 11 white women and one white man — including the five jurors who noted their opposition to inter-racial relationships on their questionnaires — voted to convict Holder of violating the disclosure law. He was sentenced to 10-15 years in prison, three times the recommended sentence. That sentence was reduced in 2003 to 7 1/2 to 15 years because of an appeal that the state Attorney General’s office failed to respond to. But Holder’s pleas for justice in regard to incompetent counsel were denied by the Michigan Court of Appeals and the Michigan Supreme Court. A writ of Habeas Corpus filed in federal court was denied and is currently slated for a hearing in the U.S. Court of Appeals for the Sixth Circuit in June.

The article also includes a brief history both of how Michigan’s HIV exposure laws came to be enacted, and US HIV-specific laws in general.

In 1990, the Ryan White Care Act required states receiving federal funds for the assistance of those impacted by HIV to certify the state had laws to prosecute HIV transmission. By the time the bill was sent for reauthorization in 2000, this mandate was removed, because 32 states had passed laws specific to HIV, and all 50 had certified they had criminal laws to address HIV transmission.

HIV is the only virus with a felony attached to it in Michigan. Those persons with human papillomaviruses, which have been linked to cancers, herpes, Hepatitis B and C, and other viral or bacterial infections are not required under state law to disclose their infection to potential sexual partners.

State Sen. Samuel Buzz Thomas, a Detroit Democrat, toyed with the idea of introducing legislation to expand the disclosure law to include persons infected with Hepatitis B and/or C last session. But the legislation was never introduced, his chief of staff Dennis Denno said. Thomas declined multiple requests for an interview on this topic.

“By criminalizing sexual activity, it hasn’t been able to protect the public,” said State Sen. Hansen Clarke, a Detroit Democrat. “We’ve [the legislature] got to look at a different policy because the current one is not effective. It could be something counterproductive, but I have to research that more.”