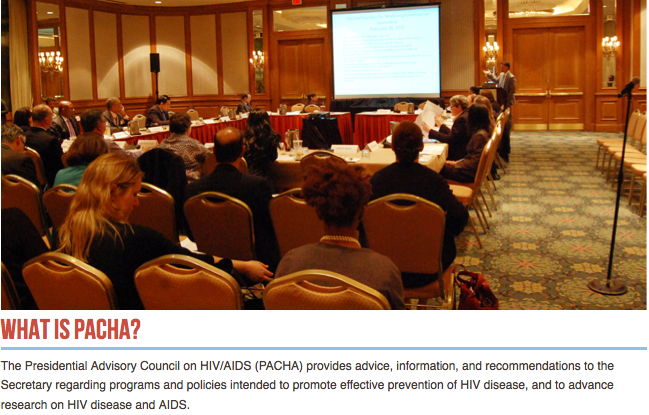 Advisory group says these statutes are ‘unjust’ and fuel the epidemic

The Presidential Advisory Council on HIV/AIDS (PACHA) passed a resolution last week that calls for an end to federal and state HIV-specific criminal laws and prosecutions.

While the resolution is only advisory, it recommends that the departments of Justice and Health and Human Services issue guidance and offer incentives to state attorneys general and state health departments to eliminate HIV-specific laws. The advisory group also asks these federal agencies to develop guidelines for how to approach HIV within criminal and civil justice systems that are “consistent with the treatment of similar health and safety risks.”

As the resolution notes, 32 states and two territories have laws criminalizing people living with HIV.

In explaining the reason to repeal these laws, the resolution reads:

People living with HIV have been charged under aggravated assault, attempted murder, and even bioterrorism statutes, and they face more severe penalties because law enforcement, prosecutors, courts, and legislators continue to view and characterize people living with HIV and their bodily fluids as inherently dangerous, even as ‘deadly weapons. Punishments imposed for non-disclosure of HIV status, exposure, or HIV transmission are grossly out of proportion to the actual harm inflicted and reinforce the fear and stigma associated with HIV. Public health leaders and global policy makers agree that HIV criminalization is unjust, bad public health policy and is fueling the epidemic rather than reducing it.

PACHA is also requesting that state and federal authorities review the cases of persons convicted under such laws and overturn convictions if deemed appropriate. The group is calling on the Centers for Disease Control and Prevention to “issue a clear statement addressing the growing evidence that HIV criminalization and punishments are counterproductive and undermine current HIV testing and prevention priorities.”

“Today’s announcement is an important advancement in our collective effort to modernize unjust and discriminatory HIV criminalization laws,” said Rep. Barbara Lee (D-Calif.), co-chair of the Congressional HIV/AIDS Caucus in a statement last week. Lee introduced the REPEAL HIV Discrimination Act in 2011, which never passed, and served on the United Nations’ Global Commission on HIV and the Law.

“I join the President’s Advisory Council on AIDS in calling on the Department of Justice and the Centers of Disease Control and Prevention to issue clear guidance to states and public health departments on the counterproductive effects of HIV criminalization policies; we must end this clear discrimination against people living with HIV,” Lee continued. “Criminalization laws breed fear, discrimination, distrust and hatred, and we must end them.”

The White House declined to comment on the resolution, but the National HIV/AIDS Strategy adopted by the Obama administration in July 2010 does call for state legislatures to “consider reviewing HIV-specific criminal statutes to ensure that they are consistent with current knowledge of HIV transmission and support public health approaches to preventing and treating HIV.”

Policymakers at the state level also welcomed the resolution. Randy Mayer, chief of the Bureau of HIV, STD, and Hepatitis for the Iowa Department of Public Health, said the resolution was a new tool in advocates’ fight to repeal Iowa’s HIV-specific law.

“This resolution came at an excellent time for Iowa,” Mayer said in an email to The American Independent.

State activists and public health officials, including Mayer, have laid out a strategy to repeal the state’s law.

“The advocates in Iowa have also aligned their efforts with a public health perspective, so the resolution was a reinforcement of their justification,” Mayer said. “I think the more public health entities that weigh in on this discussion the better.”

But while policymakers praise the resolution, activists urge cautious optimism.

Sean Strub, executive director of the anti-HIV-criminalization organization Sero Project, said the resolution was appreciated, but the “real test will be in whether federal agencies and the administration responds with the necessary urgency.”

Catherine Hanssens, executive director of the Center for HIV Law and Policy, which runs the Positive Justice Project, echoed Strub’s sentiment, noting that while the resolution is important, PACHA “has no power to order anyone to do anything.”

“[HHS] Secretary [Kathleen] Sebelius and President Obama both have the discretion to ignore the resolution’s recommendations.”

Regardless, Hanssens said the resolution is an important milestone in the battle to repeal HIV criminal laws in the U.S.

“The work of advocates who pushed for passage of the resolution is not over,” she said. “But we have passed a major marker on the road to reform, and justice, for many people and communities affected by HIV.”