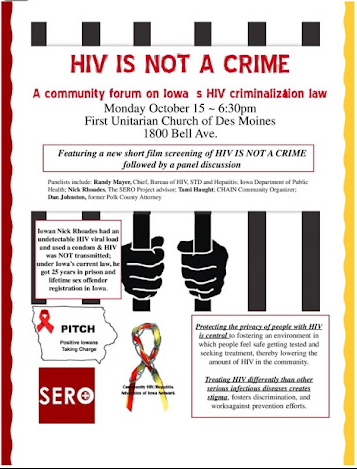 Activism to modernise the unscientific, unjust and stigmatising HIV-specific criminal statute in Iowa is heating up.  Last month, the Iowa HIV Community Planning Group voted to support advocacy efforts to have HIV treated like other similar conditions and threats to public health. To accomplish this, they have called for the repeal of Iowa’s HIV criminalisation statute.

Next Monday, October 15th in the state capital, Des Moines, there will be another of a series of planned CHAIN/Sero Project community forums highlighting these efforts. All Iowa legislators within a 30 mile radius of Des Moines have been invited and Iowa Senator Matt McCoy (Democrat), who earlier this year introduced a bill to repeal and modernise the law, will be in attendance.  Although the bill didn’t make it out of subcommittee, he plans to reintroduce another in the legislative session that begins in January.

The state of Iowa currently has one of the strictest HIV laws in the nation, making the lack of disclosure a Class B felony, punishable by up to 25 years in prison and a lifetime of sex offender status.

The statute makes no exception for lack of transmission of the HIV virus, nor does it take into account the fact that a person infected with HIV is taking the prescribed medication and has very little or no chance of passing it on.

Gay rights groups and others, including the Iowa Department of Public Health, are calling for modernization of the 1998 statute to focus penalties only on intentional or documented transmission of the HIV virus.

They say Iowa’s law is having the unintended effect of discouraging individuals from undergoing HIV testing and from obtaining access to medications that could save their lives and the lives of everyone with whom they may have intimate contact.

Iowa, which has a relatively low HIV incidence rate, ranks second in the nation in prosecutions for nondisclosure.

Reproduced below is the press release from CHAIN (Community HIV/Hepatitis Advocates of Iowa Network) announcing the Iowa HIV Community Planning Group vote and providing background to their advocacy.

In an historic move, the Iowa HIV Community Planning Group has voted to support advocacy efforts to have HIV treated like other similar conditions and threats to public health. To accomplish this, they have called for the repeal of Iowa’s HIV criminalization statute.

Iowa, like most states, has a law that prohibits intentional transmission of communicable diseases. This statute, Iowa Code 139A.20 is part of public health code. HIV, however, is covered by a separate criminal code, Iowa Code 709C, which makes exposing someone to HIV without their consent a felony punishable by up to 25 years in prison. Repeal of 709C would allow HIV to be covered by the same public health code that governs other infectious diseases.

The National HIV/AIDS Strategy and the National Alliance of State and Territorial AIDS Directors has called for review of HIV criminalization statutes to bring them in line with contemporary science and knowledge about the real routes, risks, and consequences of HIV transmission. The Iowa Department of Public Health has echoed the call for review of the statute. In a letter to the editor of The Des Moines Register on July 29, Randy Mayer, Chief of the Bureau of HIV, STD, and Hepatitis, asked that HIV be treated in the same way as other serious infectious diseases.

“Testing and treatment are our best tools for fighting the epidemic in Iowa Research has now demonstrated that the statutes haven’t had the intended effect of promoting disclosure. We believe that our public health efforts will be more successful without having to fight the stigma that these statutes can create,” said Mayer.

“Having the prestige and expertise of the HIV Community Planning Group working to repeal Iowa’s criminalization statute is vitally important,” said Tami Haught, an HIV+ Nashua resident who is coordinating CHAIN’s statewide campaign to reform the Iowa statute. “The members of the CPG include some of the best-informed and most respected public health professionals and community advocates combating HIV We believe their recognition that the criminalization statute is hurting the public health will be persuasive with legislators.”

Iowa’s statute 709C imposes harsh penalties on persons with HIV who cannot prove they disclosed their HIV status in advance to sex partners. About 25 Iowans with HIV have been charged to date, with some convictions resulting in lengthy sentencing and lifetime sex offender registration requirements, even though HIV was not transmitted and there was little or no risk of it being transmitted.

The statute has been criticized by public health officials, legal experts, and patient advocates in Iowa and across the country as counter-productive, discriminatory, and contributing to further stigmatization of people with HIV. About 36 U.S. states and territories have HIV-specific criminal statutes Originally intended to slow HIV transmission, these laws were typically passed years ago when much less was known about HIV transmission A growing body of research shows how these statutes drive stigma, discourage testing, and are making the epidemic worse.

“HIV criminalization discourages people from getting tested—you can’t be prosecuted if you don’t know your HIV status—yet we know that most new infections are transmitted by people who have not yet gotten tested,” said Jordan Selha, co-chair of Iowa’s Community Planning Group “It’s time we treat HIV like other communicable diseases and use public health science rather than criminal law to guide our approaches to prevention No other disease is singled out as a criminal threat in this way.”

CHAIN has coordinated a statewide campaign to educate and mobilize communities to lobby lawmakers to review the statute when the legislature goes into session in January 2013. They have held community forums in Mason City and Ames.

You can help efforts to repeal the statute by contacting your state legislators and the governor’s office and asking that Iowa Code 709C be repealed. CHAIN will be holding an educational forum on October 15th at the First Unitarian Church of Des Moines and at Simpson College in Indianola on January 16, 2013.

The HIV Community Planning Group promotes, through an ongoing participatory process, effective HIV programming in Iowa in order to reduce the spread of HIV and to provide access to services for those infected. The Centers for Disease Control and Prevention (CDC) mandated community planning for HIV prevention in 1993. The process is designed to create a collaborative effort between public health and the communities they serve.

CHAIN is very excited to have the support of the Iowa HIV Community Planning Group. To join CHAIN’s listserve or get involved with CHAIN and the education and mobilization campaign, contact tami.haught2012(at)gmail.com, or follow CHAIN on Facebook.