Malawi is one of the few countries in sub-Saharan Africa without an HIV-specific criminal law despite criminalising and other problematic provisions existing in many drafts of the HIV and AIDS (Prevention and Management) Bill. That these provisions were removed at the last minute prior to the law passing in 2017 stands as testament to the power of grassroots action by women living with HIV. In addition, although there has been one HIV-related case prosecuted under Malawi’s infectious disease law, this notoriously unjust 2016 breastfeeding case resulted in the conviction being overturned in a in a landmark judgement, EL v the State, The High Court of Malawi Zomba District Registry, Criminal Case No. 36 of 2016.

By the time the 2016 Malawi HIV and AIDS (Prevention and Management) Bill was tabled it was almost a decade old. Several troubling provisions – criminalising HIV non-disclosure, exposure and transmission, and those mandating HIV testing pre-recruitment in certain professions – prompted review of the bill by a number of local and regional organisations with HIV criminalisation expertise, particularly the Women Lawyers Association of Malawi, supported by the Southern Africa Litigation Centre (SALC) and the AIDS and Rights Alliance for Southern Africa (ARASA).

Following initial considerations, the community organisations invited communities of women living with HIV to join them for more detailed consideration of the bill’s possible impact. The process was very pragmatic, with organisational activists sitting with grassroots networks of women living with HIV, using their legal expertise to take them through the proposed law provision by provision.

The women then applied that legal understanding against their experiences, deciding the laws were highly problematic considering it is women who become pregnant and are then tested at the antenatal clinic, whether they want to be tested or not. They are the first to know their HIV status, and that knowledge can then be used as evidence of their criminal liability for alleged transmission of HIV. As it became clear to local women how section 43 (vaguely criminalising ‘wilful transmission’) would play out in their lives, they decided to take up advocacy against it.

The women met with members of the Parliamentary Committee tackling health and social welfare the day before the bill was scheduled to be voted upon in parliament. The women were effective: their first-person narratives persuasive. The women spoke such truth to power, and it was their efforts that resulted in section 43 being deleted.

A year earlier, a woman living with HIV had been convicted and subsequently acquitted on appeal for a crime of “transmitting a disease dangerous to life” for accidentally breastfeeding another woman’s child. The woman (EL) who unrepresented at her initial trial, was found guilty and sentenced to nine months imprisonment with hard labour. The court records indicated that the only evidence admitted was a hospital document indicating that she was on ART.

Following intervention from national and regional HIV and human rights organisations, EL appealed to the High Court arguing that the State failed to prove that a single exposure of a child to breastmilk of a woman living with HIV on antiretroviral treatment was “likely” to spread HIV; denying intent or negligence in her conduct; and arguing that the crime was unconstitutional for being vague and over-broad and violating her human rights.

In a landmark ruling, Justice Zione Ntaba overturned EL’s conviction, noting that EL did not know or believe that breastfeeding was likely to transmit HIV, the breastfeeding of another’s child was accidental, and the child did not contract HIV. In her decision, Justice Ntaba noted that the proceedings in the trial court were “blatantly bias[ed]” against the woman in violation of her right to a fair trial. She also made clear that the role of the criminal law should be to protect people living with HIV from “the unjust consequences of public panic” Athough Justice Ntaba declined to rule on the constitutionality of the offence but stated that the argument that the offence was unconstitutional was “convincing”.

CHAPTER XVII- Nuisances and Offences against Health and Convenience

Any person who unlawfully or negligently does any act which is, and which he knows or has reason to believe to be, likely to spread the infection of any disease dangerous to life, shall be guilty of a misdemeanour.

EL v the State, The High Court of Malawi Zomba District Registry, Criminal Case No. 36 of 2016
Assessment of Legal, Regulatory & Policy Environment for HIV and AIDS in Malawi - 2012

Assessment of the key HIV, law and human rights issues in Malawi (including stigma, discrimination, inequality as well as discriminatory and punitive laws that create barriers to the national response and challenges with access to justice and law enforcement issues); identification of key populations affected and analysis of the extent to which the current laws and policies as well as those under development are able to respond to these issues.

Our thanks to UNAIDS and SALC for their research assistance to confirm current relevant legislation.

Malawi: High Court of Malawi quashes conviction and sentence of woman convicted for breastfeeding and orders her immediate release

END_OF_DOCUMENT_TOKEN_TO_BE_REPLACED

Malawi: Police officers urged to stop criminalising sex-workers due to their HIV status 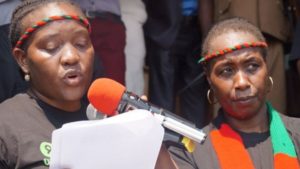 Malawi: Zomba High Court in Malawi delivers landmark ruling on the application of criminal law to cases of HIV transmission and exposure