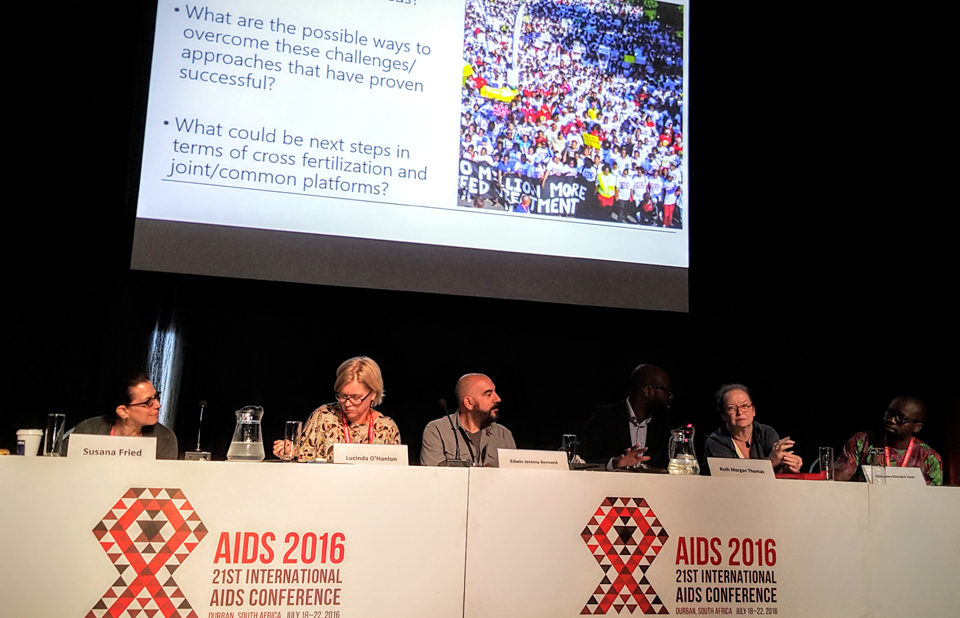 On 19 July, a workshop was hosted at the 21st International AIDS Conference, being held in Durban, South Africa. Entitled “Common at its core: understanding the linkages for challenging the impact of criminal law across population groups,” the workshop highlighted the common root causes of the misuse of criminal law against people living with HIV, sex workers and lesbian, gay, bisexual, transgender and intersex people, as well as in the context of abortion.

The discussions noted that unjust criminal laws against those populations are due to prejudice, gender inequality and discrimination. The participants stressed that punitive laws against key populations lead to serious human rights violations, exacerbate vulnerabilities to HIV and other health issues and affect efforts to end AIDS.

To address unjust laws, the participants called for building synergies among populations affected by them. This will allow experience-sharing on successful approaches in addressing criminalization and will enable the development of joint strategies. Examples of collaborations between communities to address their common health and human rights challenges were highlighted.

The discussions were concluded with a call for more collaboration in addressing the criminal law and its impact on specific populations, including in the context of HIV. This should build on efforts to expand strategic litigation and the engagement of lawmakers, the police and the judiciary to end injustice and advance health for all.

The event was organized by UNAIDS, the Office of the United Nations High Commissioner for Human Rights, Amnesty International and the Global Health Justice Partnership at Yale University.

“CRIMINALIZATION OF SEX WORK SENDS THE MESSAGE THAT SEX WORKERS ARE NOT SEEN AS FIT AND WORTHY TO ENJOY RIGHTS. SEX WORKERS EXPERIENCE SERIOUS FORMS OF VIOLENCE AND ABUSE, OFTEN COMMITTED BY POLICE AND LAW ENFORCEMENT AGENTS. THESE ABUSIVE LAWS AND PRACTICES VIOLATE HUMAN RIGHTS OBLIGATIONS.”

“RESTRICTIVE LEGAL REGIMES ON ABORTIONS, INCLUDING CRIMINALIZATION, DO NOT REDUCE ABORTION RATES BUT RATHER MAKE THEM UNSAFE. THESE RESTRICTIONS ARE ROOTED IN SOCIETAL NORMS THAT DENY WOMEN’S AGENCY AND CAPACITY TO MAKE DECISIONS ABOUT THEIR OWN LIVES.”

“AT ITS CORE, CRIMINALIZATION OF SPECIFIC POPULATIONS, INCLUDING LESBIAN, GAY, BISEXUAL AND TRANSGENDER PEOPLE, IS BASED ON PREJUDICE, FEAR AND STIGMA. CRIMINAL LAWS AGAINST OUR POPULATIONS ARE AMBIGUOUS, UNJUST AND USED MAINLY AS POLITICAL AND SOCIAL TOOLS TO ENFORCE HETERONORMATIVE AND PATRIARCHAL NORMS. WE MUST JOIN HAND AND BUILD SYNERGIES AMONG OUR COMMUNITIES AND SOLIDARITY WITH OTHER SOCIAL JUSTICE MOVEMENTS TO CHALLENGE THESE LAWS.”

“THE BREAKTHROUGH AT THIS CONFERENCE IS THE SHIFT TOWARDS INTERSECTIONALITY IN OUR EFFORTS TO END THE PUNITIVE AND ABUSIVE LAWS AGAINST VARIOUS POPULATIONS. THIS EMERGING MOVEMENT SHOULD BE SUPPORTED AND STRENGTHENED AS CRITICAL TO ADVANCING EFFECTIVE RESPONSES FOR DIGNITY, HEALTH AND JUSTICE FOR KEY POPULATIONS.”