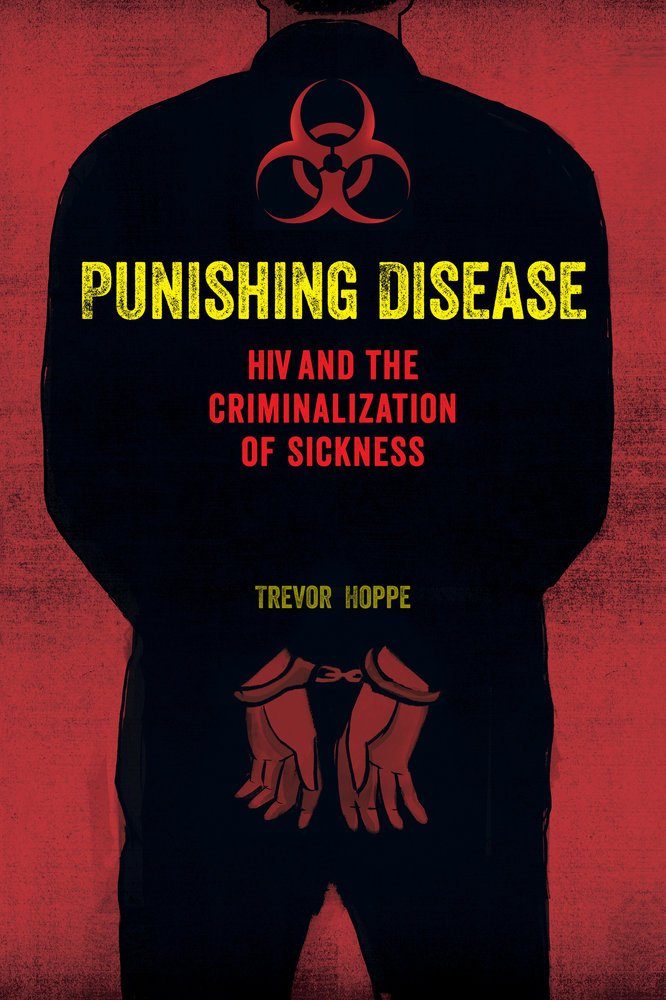 Last week, the Missouri trial of Michael Johnson ended when Johnson pled guilty to HIV exposure to get 10 years in prison, rather than the maximum of 96 years he might face if his case went to trial.

For many people who are diagnosed with HIV today, it is a chronic manageable disease, and more and more health officials agree that people who are HIV-positive and undetectable don’t transmit the virus. But, in the eyes of the law in many states, an HIV-positive person’s sexuality is something to be handled by the criminal justice system.

For National Gay Men’s HIV/AIDS Awareness Day, INTO spoke with Trevor Hoppe, author of Punishing Disease: HIV and the Criminalization of Sickness, due out November 14th, about HIV criminalization laws. Hoppe enlightens us on why they’re bad, why they’re homophobic and why they should be tossed out.

One of the arguments you bring up in your book is that a lot of these HIV criminalization laws that we live with now were never really, when they were written, they were framed as fighting HIV, but they came from a place of “mortality” rather than trying to combat the spread of the virus.

Definitely. So that’s one of the points that I’ve been making in my research is that from day one, criminal justice officials and police have been lobbying for these laws on the basis that they wanted to punish people living with HIV. In particular, in the early days, police were very frustrated with prostitutes who were living with HIV who they couldn’t put behind bars for more than a couple of months because prostitution was a misdemeanor.

So they were seeking a felony penalty so they could keep these mostly women behind bars for longer periods of time. Then it transitioned from a kind of fear of sex work to a fear of gay sex and homophobia. It’s never been about public health. It’s always been about punishment and irrational fears — using punishment to police irrational fears of HIV.

When AIDS hit in the 1980s, the people that were most likely to be affected were people who Americans thought were already criminals — drug users, prostitutes, homosexuals. Highly denigrated groups of people whose behaviors were thoroughly criminalized under existing law already. It wasn’t a stretch to move from blaming these groups from spreading the disease to calling for them to be punished using the criminal law.

One of the things you mention in the book is that HIV transmission became a felony because sodomy was already a felony and they didn’t want to allow people to get away with sodomy to talk about an HIV transmission charge.

There was all this fear, particularly in Nevada, but in other places as well, that if we repealed the sodomy laws in place at the time, there would be this massive outbreak of HIV because if you made gay sex legal, it would be more permissive and people would go out and infect each other.

There was this great anxiety that this would happen. So one of the deals that got struck in many states was, OK if we decriminalize sodomy, at the same time we have to find a way to criminalize people living with HIV because we’re scared without a law criminalizing their behavior, the epidemic is going to run rampant.

One of the things I noticed in your chapter was that these HIV criminalization laws, you mention them being poorly written. They really remind me of the religious freedom acts now, where state legislatures kind of copy one another and lawmakers look at one another’s paper. It really just makes these easy McBills that are copied from state to state.

We have this idea that all state lawmakers get together and craft this individual, well thought out piece of legislation. Really, the way it works is that we have these lobbying groups like the American Legislative Exchange Council that create model statutes and then shop them out to legislatures across the United States. So we have a copy and paste situation for most states and that’s part of the reason we have so many messed up laws with HIV because most states didn’t take the time to think about the issues, they just copied what neighboring states were doing and said, “Well that’s good enough!”

I’m really interested in this parallel that you draw between HIV criminalization laws and early 20th century eugenicists and the ways these laws are about controlling a population. Can you elaborate on that?

There’s a long history of using the criminal law, but also the civil law and public health to control to populations that we think are dangerous, and often times that determination is based on prejudice. We have quarantine laws being more strictly enforced against Chinese populations in San Francisco. We have sex workers being rounded up in World Wars I and II because they were seen as vectors of syphilis and other diseases.

A lot of people don’t know there was a movement in the United States for a time to quarantine people living with HIV. You show in this chapter that one of the architects of the early HIV criminalization laws was also a fan of quarantining people with HIV.

These things went lock and step. You had people like William F. Buckley arguing that people diagnosed with HIV should be tattooed immediately upon diagnosis. You had public health experts publishing articles in the American Journal of Public Health arguing for what they called an “HIV parole system” which was effectively quarantine with the possibility of jail time if you didn’t shape up and act in a way they deemed appropriate.

There was a really widespread effort to try to regulate people living with HIV and it was really AIDS activists that we have to thank for the fact that many of those laws never came to fruition and that we don’t have quarantine for people with HIV.

Most of these laws, as we talked about earlier, end up punishing heterosexual people, but we know that one of the most high profile cases of HIV criminalization is Michael Johnson and HIV still disproportionately affects queer people. So these laws can end up criminalizing queer sexuality still.

Absolutely. We can’t just look at who is being punished under the law, we also have to think about those other effects of how the law creates or reinforces the symbolic stigma against people living with HIV.

I know plenty of people living with HIV who live in fear that their partners will turn on them or a one-night stand can land them in jail even though they did everything they could to protect that person and, in many cases, even if they disclose. There’s still this concern that their partner, whether a one night stand or a partner, can at one point wish revenge on them. That fear is really a dangerous thing.

It’s not productive, certainly from a public health perspective. It’s emotionally draining and interesting. Really, it’s not the way to live. I think these laws are more likely to do the opposite of what they’re supposed to do. These laws are poorly written, badly construed, bad for public health, and, most importantly, bad for social justice.

What would you say to another gay man who felt like these laws actually did protect them from people living with HIV?

I think many gay men have an idea of who is being prosecuted under these laws. They imagine it to be a kind of bogeyman intentionally trying to spread the disease to their partners. They have this scary image in their mind of who is being targeted.

When I went out to research these laws, I did not know who the average person being convicted under these laws was. What I found is that the vast majority of defendants are not this scary bogeyman. They’re someone who slipped up once and they owned up to the mistake and expressed regret about it or they’re someone who was in a relationship and was struggling with how to disclose in the beginning of that relationship. There are a lot of scenarios that are far more likely to play out instead of this bogeyman scenario that most people have in their heads.

I would ask people to take a moment and not just think about the worst case scenario but think about who is being punished under these laws. They’re people like a defendant in Tennessee who attempted suicide, woke up in a hospital distressed and bit a hospital attendant and was prosecuted under Tennessee law. If you really get down to brass tacks, those are not the people they think should be punished.

And yet that’s exactly who those laws are being used to punish. There’s a disconnect between how we think the law works and how the law actually does.

People still believe that HIV is an illness of personal responsibility. When HIV-negative people imagine these laws, they imagine an HIV-positive person who in the first place must have done something wrong to get it, and then they imagine that this person might do something wrong again because they’re already morally flawed. They don’t understand that HIV is a disease of poverty, racism, homophobia, and stigma and that they themselves can one day be on the other side of the law very easily. And in America, if you do something bad, you deserve to be behind bars!

These laws are based on the idea that telling someone you’re HIV positive will surely cause them to have a different kind of sex with you or no sex at all. And really at the end of the day we have so many prevention technologies now — PrEP, treatment as prevention — that can stop transmission in its tracks when you have sex with someone living with HIV.

The evidence really suggests that the best way to get HIV is to avoid having sex with HIV-positive people and only have sex with people who think they’re HIV negative.  If you think you’re keeping yourself safe by relying on people to disclose your status to you, you have another thing coming. The people most likely to transmit are people who don’t know they’re positive because their viral loads are high because they’re not on treatment.

It’s a false security blanket for many HIV-negative gay men and that’s what I guess at the end of the day, for our day to day lives, is the most important point. Have sex with someone who’s positive. That’s your best prevention strategy given the technologies that are available today!

Published in September 28, on Into