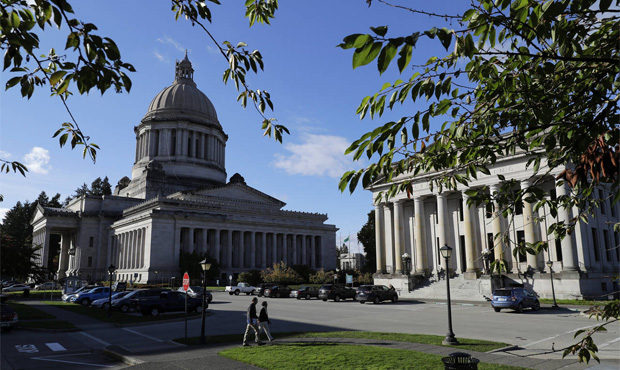 OLYMPIA, Wash. — The Washington Legislature on Tuesday approved a bill that reduces the crime of intentionally exposing a sexual partner to HIV from a felony to a misdemeanor.

Supporters of the change to the rarely used law say the current penalties don’t have an effect on reducing transmissions or improving public health. Opponents argued the move diminishes the significance of the impact on a person who is unknowingly infected.

The House passed the bill on a 57-40 vote last month, and the Senate passed it on a 26-23 vote Tuesday. The measure now heads to Gov. Jay Inslee, who supports the bill and is expected to sign it.

“I realize that this disease evokes fear and emotion even today,” she said. “I understand that the laws that are currently on the books were originally meant to protect people from HIV, yet three decades later we know that instead these laws have only increased the stigma and led to abuse.”

The legislation, which was requested by the state Department of Health, also calls for more intervention from local and state health officers, allowing them to recommend options ranging from testing to counseling. They could even mandate treatment for an individual determined to be placing others at risk.

Republican Sen. Maureen Walsh said there were several elements of the bill that she agreed with, but she couldn’t support it with the reduction of penalties for intentional transmission.

“There is nothing but malice behind a person who would go out and knowingly infect another individual with, frankly, a life sentence,” she said. “And I realize a lot of people are living longer, but they’re spending a lot of money on drugs.”

Under current law, a person can be charged with a felony for exposing or transmitting HIV to another person and could face as much as life in prison and a $50,000 fine, depending on the circumstances. Under the bill approved by the Legislature, that crime becomes a misdemeanor that could carry a penalty of 90 days in jail and a $1,000 fine if a person is infected. In cases where someone lies about their HIV status, it becomes a gross misdemeanor, with penalties of up to a year in jail and a $5,000 fine. An amendment accepted in the House maintains the felony charge for someone who intentionally transmits HIV to a child or vulnerable adult, and requires them to register as a sex offender.

Between 1986 and 2019, there have been 33 criminal cases filed under the current HIV-related statutes, according to the Department of Health. Three of those cases resulted in a felony conviction.

The Department of Health says there are an estimated 14,744 people in the state living with HIV, with about 81 percent of them virally suppressed, meaning they are unable to transmit the virus.

The Center for HIV Law & Policy says Washington is among 29 states with HIV-specific laws. Once Inslee signs the measure into law, Washington will join seven other states that have reformed or repealed one or more parts of criminal laws specific to HIV.

Other states that have introduced bills this year on reforming HIV-specific laws include Ohio, Florida and Virginia.

It’s been a law on the books for decades – anyone busted for intentionally infecting someone with HIV faces felony first degree assault.

Under a controversial bill passed by the House this week, that crime would be lowered to a misdemeanor or gross misdemeanor, depending on the circumstances.

Republicans unanimously rejected the measure in the House, contending, among other things, that lowering the punishment puts the public at risk.

But supporters argue the state’s current law, enacted in the ’80s and only updated with a few minor changes in the ’90s, is outdated and increases stigma surrounding HIV, which in turn damages public health efforts.

The bill, HB 1551, originally sponsored by current Speaker of the House Democrat Laurie Jinkins and now sponsored by Democratic Rep. Eileen Cody, is a wide ranging bill that makes multiple changes to state law regarding mandatory testing for HIV, what the public health departments can and cannot do in investigating, and allowing minors to get treatment for HIV without parental consent, but the provision creating the bulk of the controversy is the reduction of the crime relating to intentionally infecting a person with HIV.

Supporters of the bill say the criminalization of HIV has only led to increased stigma that damages ongoing public efforts, according to the 2016 report from the End AIDS steering committee.

“Criminalizing us with a felony A for having a disease state … that’s not a banner I can get behind anymore, and frankly that doesn’t make people want to rush out and get engaged with public health,” Scott Bertani, an HIV positive man and Lifelong AIDS Alliance member, told lawmakers at a hearing on the bill last session.

“HIV is not the same disease as it was over 30 years ago,” said Lauren Fanning with the Washington HIV Justice Alliance. “The law contributes to stigma so many people with HIV feel by how others treat them like they are dirty and they have a great deal of difficulty overcoming that in their lives.”

“The law creates fear of being tested, fear of accessing healthcare, and undermines the trust and prevention care and treatment systems impacting our marginalized communities the most,” Fanning added.

Nearly a year later, on the House floor this week, Democratic Rep. Nicole Macri said changing the law was long overdue and would decrease stigma while strengthening public health by finally treating HIV like the disease it is.

“A treatable, a chronic illness, and not a moral failing or criminal justice issue,” Macri said.

But Republicans argued the changed law would put the public at risk by making the crime and penalty for intentionally infecting a person with HIV the same as it is for stealing a candy bar.

Rep. Michelle Caldier said it would have other unintentional consequences by removing a tool for prosecutors who use the HIV felony crime as a method to convict rapists.

Macri painted this bill as a compromise, telling fellow lawmakers that many of her constituents want to completely decriminalize HIV.