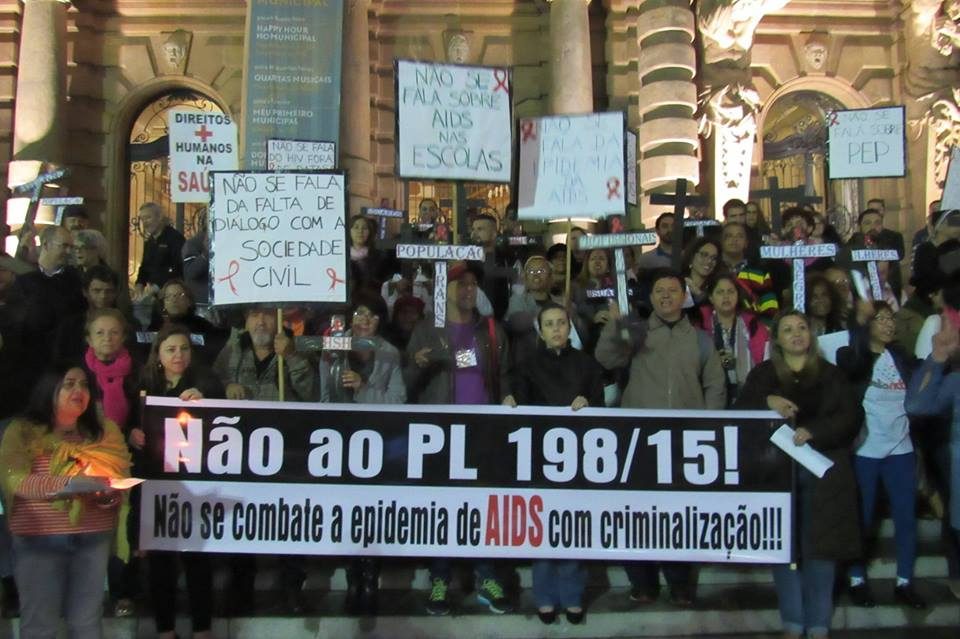 The amendment, Bill No. 198, 2015, would have added to the list of heinous crimes – which currently includes murder, extortion, rape, child exploitation and spreading an epidemic that results in death – those who “transmit and infect consciously and deliberately others with the AIDS virus. (sic)”.

According to Brazil’s AIDS News Agency

In Brazil, intentional transmission, that is, with intent, is already considered a crime. Articles 130 and 131 of the Penal Code already provide for imprisonment for those who infect others. Anyone who exposes someone to a venereal disease through sexual intercourse can be jailed for three months to a year or receive a fine. If the person intentionally wants to transmit the disease, the penalty is imprisonment, from one to four years, and fine.

“The initiative to criminalize HIV-positive people does not contribute to the fight against prejudice and discrimination, and it also throws the responsibility of prevention on the infected person,” says a statement released on Thursday by Foaesp Of the State of São Paulo).

In this same document, the Forum thanked Mr Pompeo for his request to withdraw from the PL. “We are now waiting for the House Board to abide by the request and file the bill, and we will also be careful that no other parliamentarian has a similar initiative.”

Activists from all over Brazil have celebrated the Bill’s withdrawal. Any new proposal cannot be considered by the current parliament and now must wait until after elections, scheduled for October 2018.

Since 2015, PLHIV networks, civil society organisations, the Department of STDs, AIDS and Viral Hepatitis of the Ministry of Health, and a number UN agencies – includng UNAIDS and UNFPA – had all pressured Congress to withdraw the bill.

Update (September 4th).  A press release by the Department of STDs, AIDS and Viral Hepatitis of the Ministry of Health notes:

The director of the Department of STDs, AIDS and Viral Hepatitis (DIAHV), Adele Benzaken, called the federal MPs Érica Kokay (PT-DF), member of the Family Social Security Commission (CCSF) and Coordinator of the Joint Parliamentary Front to Combat STDs, HIV , and AIDS – and Laura Carneiro (PMDB-RJ) and Deputy Pompeo de Mattos to thank them for their support against the procedure of PL 198/15. ““The effort of these parliamentarians was essential to educate their colleagues in the House to reassess that Brazil is a reference in the treatment of HIV / AIDS and that this will not help the Brazilian response at all.“ The director of DIAHV also highlighted the mobilisation made by civil society and the support of the Brazilian Office of the Joint United Nations Program on HIV / AIDS (UNAIDS) that she said were key to the outcome achieved with the filing request.

For the UNFPA representative in Brazil, Jaime Nadal, the bill goes against the ideals and proposals of the United Nations regarding the HIV / AIDS epidemic. Criminalizing HIV transmission, in addition to reinforcing the stigmatization of people living with the virus, may discourage people from undergoing testing and treatment, since they would be under threat of becoming criminals, he said.The bill ignores the scientific advances in HIV / AIDS, which prove that antiretroviral treatments reduce the chances of transmitting the virus in sexual intercourse by up to 96%. “Many countries around the world are reforming their laws criminalising HIV transmission,” said Nadal, adding that the bill goes against the global trend.

UNAIDS Director in Brazil, Georgiana Braga-Orillard, reinforced the speech of the UNFPA representative. According to her, the bill further vulnerabilises populations with a positive serological status, since “it considers the more than 800 thousand people living with HIV in Brazil as potential criminals.”

In a technical note, UNAIDS outlined six counter-arguments to the bill: it penalizes the most vulnerable; it promotes fear and discrimination; it favours the selective application of the law; it disregards the scientific evidence on HIV; it compromises privacy and confidentiality, and it will make Brazil lose its leading role in the response to HIV / AIDS.

A public meeting with the Congressman, scheduled for July 4th, was cancelled at the last minute.  However, the letter of withdrawal, although only publicly released yesterday, was dated May 11th.

In July, a newspaper reported that a 43 year-old heterosexual man was charged with serious bodily injury in a Rio de Janeiro court for ‘attempting to infect two women with HIV’ by having sex without a condom.

In an interview with the Rio newspaper Extra , the man admitted that he was HIV-positive and [allegedly] transmitted HIV to the women, but denied that he had had sex without a condom with the intention of infecting his partners.