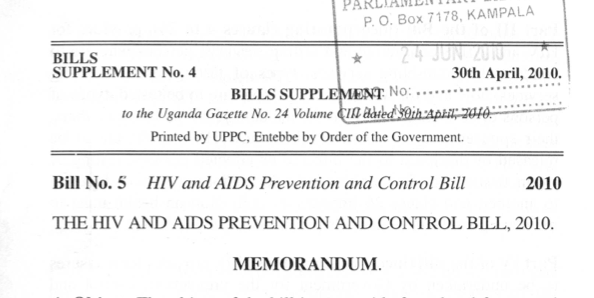 After years of intensive debate and strong local and international advocacy against many of the problematic clauses found within Uganda’s omnibus HIV law, yesterday Uganda’s Parliament passed the HIV Prevention and Control Act virtually unchanged from this 2010 version.

The bill includes mandatory HIV testing for pregnant women and their partners, and allows medical providers to disclose a client’s HIV status to others. The bill also criminalises ‘wilful and intentional’ HIV transmission, attempted transmission, and behaviour that might result in transmission by those who know their HIV status.  There are some excellent analyses of the problematic provisions at The Observer (Uganda) and the Science Speaks blog.

Clauses 39 (‘attempted transmission of HIV’) and 41 (‘intentional transmission of HIV’) were adopted in the debate last week, as were clauses 13, 14 and 15 on mandatory and routine testing, with unverified reports that the ambit of clause 13 (‘HIV testing for purposes of criminal proceedings’) was broadened further. (Follow Parliament Watch Uganda [@pwatchug] on Twitter for latest details of the actual text).

Today, two press releases from Human Rights Watch, HEALTH Global Advocacy Project, and Uganda Network on Law, Ethics & HIV/AIDS (UGANET) and The International Community of Women Living with HIV (ICW) condemned the passage of the law in the strongest terms. They are likely to be the first of many.

“This HIV bill is yet another step backward in the fight against AIDS in Uganda,” said Maria Burnett, senior Africa researcher at Human Rights Watch. “It is founded on stigma and discrimination and based on approaches that have been condemned by international health agencies as ineffective and violating the rights of people living with HIV.”

Mandatory HIV testing and the disclosure of medical information without consent are contrary to international best practices and violate fundamental human rights, the three groups said. The criminalization of HIV transmission, attempted transmission, and behavior that might result in transmission by those who know their HIV status is overly broad, and difficult to enforce.

“For Uganda to address its HIV epidemic effectively, it needs to partner with people living with HIV, not blame them, criminalize them, and exclude them from policy making,” said Dorah Kiconco, executive director of Uganda Network on Law, Ethics & HIV/AIDS. “The president should not sign this bill and instead ensure a rights-based approach, recognizing that people living with HIV will prevent transmission if they are empowered and supported.”

“At the upcoming international AIDS conference, Uganda will be the example to all the countries gathered of how not to write laws on the HIV response,” said Asia Russell, international policy director at Health GAP (Global Access Project). “Parliamentarians are doing precisely the opposite of what Uganda should be doing to fight HIV.”

ICW’s press release is below

Today’s passage of the HIV Prevention and AIDS Control Bill represents a dangerous backslide in Uganda’s efforts to respond to HIV. While the bill may have been intended to facilitate and improve the HIV response in Uganda, the bill contains many poorly conceived and fear- induced provisions that have no place in a public health and human-rights-based response to HIV. As passed, this bill will actually weaken Uganda’s HIV prevention efforts and will have a detrimental and disproportionate impact on the rights of women and girls and in particular women living with HIV.

The International Community of Women Living with HIV Eastern Africa is extremely concerned about the devastating impact this law will have on the daily lives of women in Uganda. “It is disappointing that the Members of Parliament that we have engaged for so long, have ignored all the evidence, science and reason that we advanced as civil society organisations together with technocrats and scientists and chose instead, to act out of fear and unfounded hysteria – betraying the very will of the people that elected them to Parliament to represent their issues” said Lillian Mworeko, Regional Coordinator ICW EASTERN AFRICA.

The bill includes outdated and dangerous provisions for mandatory testing for pregnant women and their partners under Clause 14 (b) and (c). Mandatory testing of people living with HIV is a violation of fundamental human rights and accepted principles of informed consent and will negatively impact antenatal care attendance. Women—who will likely be the frequent target of these provisions— will shy away from hospitals and medical services. The devastating result will be that more children will be infected through mother to child transmission of HIV. Uganda is currently making strong strides towards zero infections from mother to child through use of proven strategies that emphasize voluntary counseling and testing. But Uganda’s gains could be lost if women are forced to test every time they visit a health facility. HIV testing of pregnant women, their partners and victims of sexual offenses must always be voluntary and conducted with informed consent.

“The fact that Uganda is even considering mandatory testing of pregnant women or victims of sexual offenses, represents a major step backwards for a country which showed early promise as an effective responder to HIV. Unfortunately, fear and ignorance have won the day in Uganda.” said Jessica Whitbread, Global Director of the International Community of Women Living with HIV.

Despite growing international consensus that criminalization is actually counter productive to the HIV prevention strategies, the Bill creates unnecessary and ill-advised additional criminal laws that criminalize attempted and intentional transmission of HIV. The International Community of Women living with HIV unequivocally opposes the criminalization of HIV status. The existing penal code already includes sufficient provisions to address criminal acts, creating additional parallel set of laws will just serve to persecute and punish people living with HIV. Criminalization will disproportionately impact women, who are more likely to know their HIV status through pregnancy related medical care. This provision will do little else but result in increased stigma and discrimination against people living with HIV, which are key drivers of the HIV epidemic.

Furthermore, the bill empowers medical workers to disclosure a person’s HIV sero status to a third party. Clause 21 (e); “where any other person with whom an HIV infected person is in close or continuous contact including but not limited to a sexual partner, if the nature of contact, in the opinion of the sexual medical practitioner, poses a clear and present danger of HIV transmission to that person;” Not only is this provision a clear violation of human rights and confidentiality but it is ripe for abuse by medical workers. Disclosure by medical workers of a person’s HIV status based purely on an individual opinion represents an institutionalized form of stigma and discrimination and dramatically increases the likelihood of violence against women living with HIV.

These poorly considered provisions at their best violate human rights and enshrine stigma and discrimination into law and at their worst will cause many people to shy away from accessing programs that work, such as prevention, treatment and care and support services including elimination of mother to child transmission services (eMTCT). Sadly, this bill undermines the very services that Uganda needs more than any other country in the world.

“Uganda is already facing a serious backslide from its early advances in responding to HIV, Uganda is currently one of three African countries experiencing increases in their HIV prevalence rates previously from 6.5% to 7.3 %. The passage of this Bill will only serve to increase this backslide and the President must save Uganda from this backlash”, says Margaret Happy, the Sexual Reproductive Health and Rights Officer, ICW Eastern Africa.

ICW Eastern Africa urges His Excellency Yoweri Kaguta Museveni, the President of Uganda, to rise above all and not assent to this Bill which is in contradiction of the commitments made by his wise assent to the East African Community HIV & AIDS Prevention and Management Act, 2012 .