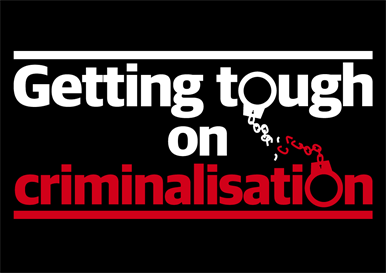 The fight to combat HIV criminalization is not new. After years of activism, gains are finally being made to repeal statutes that turn a person’s knowledge of their HIV status into a crime.

Just this year, Colorado’s HIV modernization bill comprehensively repealed almost all of the HIV-specific statutes in the state. This is an evidence-based success: Criminalizing people’s HIV status does not inhibit HIV transmission, but instead turns their knowledge and treatment of that status into evidence of a crime. This weaponizes their knowledge and their enrollment in the very care public health officials recommend, forcing people to weigh testing and treatment against fear of arrest.

With the growing success in fighting HIV criminalization, it is now time for advocates to take the conversation beyond the repeal of HIV-specific statutes and to confront the larger context of how criminalization encourages HIV transmission.

The growing data on where and when laws criminalizing a person’s status are implemented show that the people in the crosshairs of these laws are often those already criminalized through their engagement in sex work. The ostensible targets of HIV criminalization laws may be people who are not otherwise criminalized, but the data clearly show who faces most of their impact. The more common way that people who are HIV positive are criminalized for their status is not through general HIV criminalization statutes, but through laws that upgrade a misdemeanor prostitution charge to a felony if a sex worker is HIV positive.

The Williams Institute looked at who is charged and convicted of HIV-specific statutes in California found that “[t]he vast majority (95%) of all HIV-specific criminal incidents impacted people engaged in sex work or individuals suspected of engaging in sex work.” Research out of Nashville, Tennessee, corroborated this picture, with charges disproportionately targeting people arrested for prostitution, who then faced a felony upgrade and (until last year) were required to register as sex offenders for being HIV positive. However, these laws are not the only way criminalization increases sex workers’ vulnerability to HIV transmission, and advocacy must expand its vision to include the fuller context.

At the Sex Workers Project, we work with individuals who trade sex across the spectrum of choice, circumstance and coercion. For sex workers, the relationship between criminalization and health is complex and deeply interwoven.

When we look at the role of HIV transmission in the lives of our clients and community, it is not simply HIV-specific statutes, but the tactics of policing and the instability created through criminalization that increase people’s vulnerability. If the long-term goal is to end the spread of HIV, advocacy should target criminalization more holistically and see HIV modernization, or the on-going state-by-state push to repeal these statutes, as just one of the initial steps needed to explore the nexus between public health and criminalization.

When we expand our scope beyond these specific statutes to look at how policing and criminalization encourage HIV transmission, a more complex and multi-layered picture emerges. For instance, the relationship between evidence of a crime and transmission of HIV does not end with simply knowing one’s status. Law enforcement’s use of condoms as evidence of prostitution has a chilling effect. In research on the impact of policing that uses safer-sex supplies as evidence of a crime, many sex workers reported that they were afraid to carry condoms or take condoms from outreach workers, regardless of whether they were engaging in prostitution at that time. Most impacted by these policing practices were transgender women of color, a population acknowledged to be already at higher risk for HIV transmission. Transgender women are commonly profiled as being engaged in sex work, and therefore, were most at risk for being arrested for the mere possession of condoms. This means that policing practices are actively putting the community with the highest vulnerability to HIV at even higher risk of transmission.

Further, policing procedures that inundate areas “known for prostitution” with law enforcement push sex workers into isolated locations to avoid arrest. This means isolation from peers who can provide harm reduction and safety, and from outreach workers who may offer resources — in addition to making sex workers vulnerable to physical and sexual assault, as physical isolation carries its own risk of HIV transmission.

The fight for HIV modernization bills across the country is already having a demonstrable success. The recent Colorado HIV modernization bill shows what a comprehensive policy can look like. Many other state-based efforts have made sure their work encompasses those most impacted by HIV-specific statutes and fought to include in their advocacy sex workers and organizations serving people who trade sex.

Kate D’Adamo is the national policy advocate at the Sex Workers Project at the Urban Justice Center, focusing on laws, policies and advocacy that target folks who trade sex, including the criminalization of sex work, anti-trafficking policies and HIV-specific laws. Previously, Kate was a community organizer and advocate for people in the sex trade with the Sex Workers Outreach Project-NYC and Sex Workers Action New York. She holds a BA in political Science from California Polytechnic State University and an MA in international affairs from the New School University.