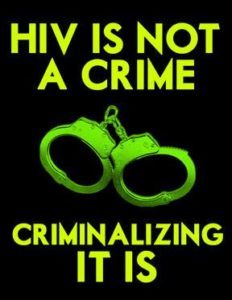 HIV Stigma and the Criminal Law

December 1st marks World AIDS Day, an opportunity for people worldwide to unite in the fight against HIV, show their support for people living with HIV and to commemorate people who have died. Matthew Weait, from the University of Portsmouth, writes here on how stigma and the law affect the lives of people with HIV.

Today, December 1st, is World AIDS Day.  According to the latest available data from UNAIDS, 1.1 million people died from AIDS-related causes in 2015, there are just over 2 million new HIV infections globally every year, and just under 40 million people are living with the virus.  These are depressing figures, particularly in light of the advances in our understanding of HIV, its prevention and treatment, the laudable rise in the number of people accessing antiretroviral therapy (ART) (up from 7.5 million to 18 million in the past five years), and the massive impact of ART on reducing the likelihood of onward transmission.

Despite the fact that the life expectancy of people on ART has improved significantly, especially for those who receive a timely diagnosis, and that there exist effective ways of avoiding infection, the stigma associated with HIV remains.  The impact of this stigma, and the associated discrimination which people living with HIV (PLHIV) and those in key populations are subjected to, is substantial and undermines the work being done to promote access to health and other services critical to curtailing the epidemic.

Stigma is not only correlated with adverse health outcomes for PLHIV (including depression and lower adherence to medication), but also with non-disclosure of status and with less safe sexual practices.  It is for these reasons that combating stigma, and the factors which contribute to it, has long been identified as a public health priority.

Among the most pernicious contributors to HIV stigma is the widespread and inappropriate use of criminal laws against PLHIV and those at heightened risk of infection.  For example, PLHIV or those suspected of being HIV-positive have been and are at risk of being investigated, prosecuted and imprisoned for exposure offences – where no transmission takes place – even where there is negligible risk (as when a PLHIV is on effective treatment and has an undetectable viral load), where there is no risk (e.g. through biting or spitting), and even where a partner has consented to the risk involved.

In some countries, such as Canada, the very fact of non-disclosure of status can, irrespective of risk, turn otherwise consensual sex into sexual assault.  And where transmission does in fact occur (which is more likely when someone does not know their status and is not on treatment than when they do know and are), PLHIV are at risk of extended custodial punishment, even if it is not their intention to cause harm.

These laws serve no public health purpose and, because it is typically only those that have a positive diagnosis who may be found criminally liable, do nothing to incentivise the testing which is a pre-requisite of treatment and care.

It is not only those already living with HIV who suffer from the enforcement of punitive laws.  The social opprobrium associated with and / or criminalization of transgender people, homosexuality, sex work, and injecting drug use in many countries of the world (including nations with high HIV prevalence) reinforces stigma, makes it harder to support those at heightened risk of acquiring the virus, and in fact makes infection more likely.

If the possession of condoms is treated as evidence of sex work, sex workers may not carry them; and if the possession of syringes is treated as evidence of drug use, the chance that these will be shared increases, as does the risk of transmitting blood-borne viruses (including HIV and hepatitis C).  Put simply, the policing of these communities, and the absence of harm reduction opportunities in the carceral settings they may find themselves in as a result of that policing, exacerbate risks which are already greater than for the general population.

The adverse impact of using criminal law in the fight against HIV, and on those directly and indirectly affected by it, has been extensively researched and documented.  The consensus among expert bodies such as UNAIDS and the Global Commission on HIV and the Law is that countries should review their punitive laws and significantly restrict their use, and there have been a number of progressive and welcome developments both in law reform and in policing, many of these led by coalitions of activists and clinicians.  At the same time, and despite the evidence of the harm that they cause, and the stigma which it feeds and sustains, countries continue to pass and enforce these laws.

Irrespective of any moral or ethical questions there may be about HIV transmission, exposure, or non-disclosure, it is incontrovertible that the criminal law makes the elimination of HIV harder.  If we are going to end the epidemic, this needs to be recognised and acted on as a priority. If not, more people will become infected, more people will get sick, more people will have a lower quality of life – even when virally suppressed – and more people will die.