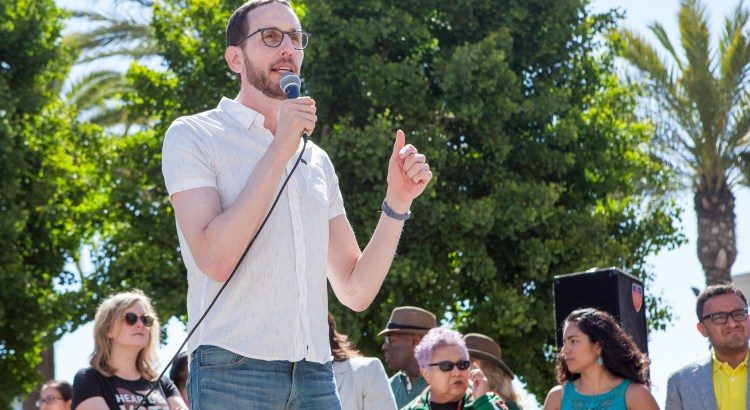 Successful HIV Criminalization Reform in California: Q and A with Sen. Scott Wiener

Many of these laws improperly single out HIV over other infectious diseases and reflect a lack of understanding of both how HIV spreads and how it can be treated.

In 2017, California passed legislation which modernized and improved California’s HIV criminalization law. One of the authors of the law was State Senator Scott Wiener. I recently had a chance to ask Sen. Wiener some questions about that process.

His responses are given here in hopes of supplying useful information for legislators, lobbyists, and activists in other states who are interested in starting the reform process in their own states or other jurisdictions around the world. This interview has been edited for clarity.

Mark Satta: You sponsored and helped author California Senate Bill 239, which in 2017 was signed into law by Governor Jerry Brown. Senate Bill 239 modernized HIV criminalization in California. Can you give us a brief overview of what California HIV criminalization law looked like before the passage of this new law and what the major changes are that passage of the new law brought about?

Sen. Scott Wiener: In the late 1980s and early 1990s, California, like many states, adopted very harsh felonies to punish HIV-positive people who engaged in sexual activity with other people without disclosing their HIV status.

California has a catchall misdemeanor for willfully exposing someone to an infectious disease, which has been on the books for many years. But HIV, of all the many serious, deadly infectious diseases, was singled out for especially harsh felony treatment. The laws didn’t require you to transmit HIV, and in fact didn’t even require any meaningful risk of infection. So if you were virally suppressed, for example, or if the other person was on PrEP, or if you were engaging in sexual activity that really didn’t create much of a risk, under the old laws, it didn’t matter. They were very broad, draconian laws.

There was one law specific to sex workers where there didn’t even have to be physical contact. If [a sex worker] solicited someone without telling them they were HIV-positive, even if they never actually had sex, they were guilty of a felony. The new law converts sex worker felonies into misdemeanors.

It was really women, and in particular African American women and sex workers, who were targeted. And really, the laws did nothing to actually reduce HIV infections — all it did was stigmatize people with HIV and encourage people to hide their status.

So they’re just terrible, horrible laws and that’s why we tried to reform them.

Satta: In writing the bill, what were the major sources of information that you and Assembly member Gloria consulted to determine the ways in which California’s criminalization of HIV failed to accord with our scientific and medical understanding of HIV/AIDS?

Sen. Wiener: Part of [our information was] based on data on how you reduce and eliminate HIV infections, and the whole concept of getting to zero, which I’m very familiar with. You do it by encouraging people to get tested regularly so they know their status, and then if they do test positive, they quickly go on medication to become virally suppressed. And the people who are negative have access to all preventative tools, including PrEP.

So when you criminalize and single out people with HIV, it encourages people not to get tested. Because if you don’t know your status then you can’t be guilty of a crime. It encourages people to be very secretive about their status. And being secretive about your status undermines public health. That’s not how you get people tested or into treatment. You want people to feel comfortable being very open about their status. So that was the bedrock of the science we relied on.

We also had plenty of data on who was being targeted by these laws. It was targeting specific demographics. So even if one were to believe that criminalization somehow reduces infection—which it doesn’t— why would almost half of arrests and prosecutions be of women when they’re only 12 percent of the HIV-positive population? We also worked extensively with a broad coalition that included many public health organizations, physicians, and people who really understand the science.

Satta: In advocating for the bill in the California state senate, what messages and information resonated most strongly with your colleagues?

Sen Wiener: It depended. When you explained about how criminalization doesn’t reduce infections, for a certain segment of colleagues, that was enough. But what really resonated with others was that HIV was being treated differently than other infectious diseases, and more harshly. I had one colleague—a moderate Democrat from a pretty conservative district—and I was not sure if we would get her vote. When I talked to her about it and told her that HIV was being treated differently, as a felony, while other infectious diseases were a misdemeanor. She said to me, “Wait, you’re telling me that Ebola and TB are a misdemeanor, but HIV is a felony, and you want to move HIV into the same category as TB and Ebola?” And I said, “Yes.” And she said, “That’s all I need to know. Whenever I’m asked about it, that’s how I’ll answer.” And she voted for the bill.

Satta: What advice would you give activists and legislators in other states or jurisdictions who are interested in advocating for legislative reform around HIV criminalization?

Sen. Wiener: First, build a very, very strong and broad coalition. The endorsement list for SB 239 was pages long. It included every reputable civil rights organization, public health organization, LGBT organization, immigrant organization — I mean, everything. You look at these incredibly well-respected organizations ranging from the ACLU, to Planned Parenthood, to respected healthcare advocacy organizations, and even before you delve into the facts, you say, “Look: if all these groups are supporting this, this is a bill I’m supporting.” This is especially true for Democrats.

Because of that broad coalition, lobbying for the bill was incredibly impactful. As an author, that made my life a lot easier. I talked to almost every member of the legislature about the bill one-on-one over the course of the year, but having the coalition aggressively lobbying made a big difference.

Then, really talk to legislators, colleague to colleague. Lots of people have this reaction where they think that if someone is trying to infect someone, they should be guilty of a felony. But you have to talk to them about the notion of the sociopath trying to infect people. Does that happen? Yes, but it’s extremely rare, and those are not the people being prosecuted under these laws.

You also have to indicate that this is a priority for LGBT civil rights organizations. That was very powerful, too. Equality California made the bill its number one priority of the year. For a number of Democrats, this is very compelling. Democrats, in California at least, want be on the right side of LGBT issues. And even though HIV goes beyond the LGBT community, obviously, there’s an enormous overlap.

Also, educate the reporters who are going to cover potential legislative reform. What we found was that there were a couple of publications in California—the San Francisco Chronicle and the Sacramento Bee in particular—that had reporters who really got it. For a number of other publications it was more hit and miss. And even when you had a good reporter, the editors would put clickbait headlines on. So other than some really good articles in the Bee and the Chronicle, we were never able to get accurate coverage. It would always be sensationalist. The headline would be something like, “Bill Proposes Making it Not a Felony to Intentionally Infect Someone with AIDS.” The Los Angeles Times was unfortunately notorious for clickbait headlines like that, which really flamed people up. We even got to the point where we did a call in and we invited the press just to talk about the basic facts of the bill and it didn’t work. So, before you even start you need to identify the reporters likely to report on this, sit down with them, and try to educate them about the facts.