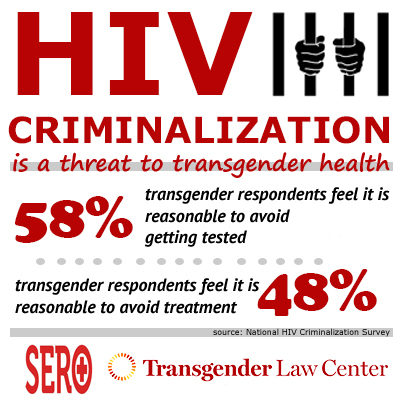 People living with HIV (PLHIV) who identify as transgender or third sex are more likely than any other group to feel that it is reasonable to avoid HIV testing (58%), disclosure of one’s HIV positive status to sex partners (61%) or accessing HIV treatment (48%) because of fear of HIV criminalization and distrust of the U.S. criminal justice system. The new findings from the National HIV Criminalization Survey were presented at the National Transgender Health Summit on May 15, 2013.

“These findings don’t surprise us,” said Cecilia Chung, Senior Strategist at the Oakland, California-based Transgender Law Center. “The data speaks to the long-standing history of stigmatization and discrimination of trans people, especially trans people of color, by the criminal justice system, because of either their race or their gender identity.” Chung was the first trans woman elected to chair the San Francisco Human Rights Commission, and she is currently a board member of the Global Network of People Living with HIV (GNP+).

More than 3,000 people living with and affected by HIV participated in the National HIV Criminalization Survey from June to August 2012, conducted online by the Sero Project in conjunction with Eastern Michigan University. The principal investigator, Laurel Sprague, is the Sero Project’s Research Director, Regional Coordinator of GNP+ North America, and a PhD candidate at Wayne State University in Detroit, Michigan.

While the results revealed that HIV criminalization can discourage HIV testing—nearly 25% of HIV-positive respondents said that they knew one or more people who did not get tested for fear of criminal prosecution—when researchers returned to the survey results to closely examine transgender and third sex responses, they found that these particular respondents faced increased levels of vulnerability in relation to the U.S. justice system.

Sprague shared a range of quotes from the survey to illustrate various nuanced transgender and third sex experiences and opinions regarding HIV criminalization:

• One trans woman explained why she didn’t press charges for non-disclosure: “In order to file charges, I [would have] had to disclose my rape, my [HIV] status and I would have to give up my privacy and be subjected to public scrutiny.”

• A third sex respondent said, “I think in cases of rape, incest and other power- or force-related situations, prosecutions should go forward. Otherwise, NO!”

• Another trans woman said that she didn’t press charges for non-disclosure because of the “difficulty in proving in court that he had infected me—and also accepting that we took equal risk in being intimate without protection.”

For policy makers and public health workers, the transgender and third sex responses to Sero’s National HIV Criminalization Survey should raise concern, especially the survey results that show increased barriers to HIV testing and treatment, as well as deep feelings of legal vulnerability due to HIV criminalization.

The responses highlight a critical need for access to legal education and legal services, safe and confidential locations for accessing health care, and support for spaces where transgender people living with HIV can share their experiences, provide mutual support, and work together to identify resilience strategies and advocacy priorities.