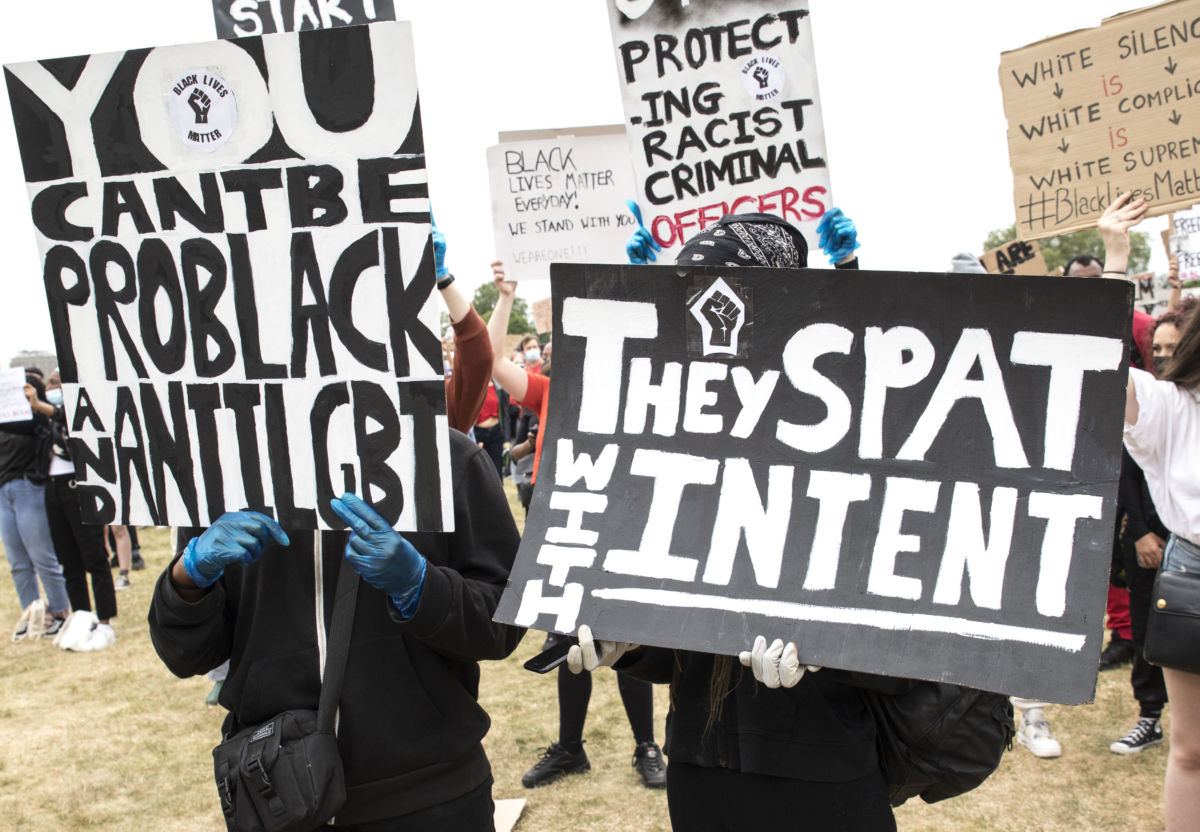 Marginalised communities will not get justice from criminalising Covid-19 transmission

The criminalisation of the virus would create greater barriers to accessing healthcare systems already preventing many people from getting treatment.

After it was announced that no further action would be taken by police regarding the death of Belly Mujinga, a railway worker who contracted coronavirus after reportedly being spat on, there was national outcry. Her name has been plastered on placards at Black Lives Matter protests, while the public has pointed out that a man in Scotland who spat on a police officer while “joking” about coronavirus in April has been jailed for a year. But while this outrage is valid in the face of a government who continues to show their blatant disregard for black lives, criminalisation of diseases has been proven to be an ineffective tool for justice.

Over the past few months, parallels have been drawn between the Covid-19 pandemic and the HIV epidemic. Both viruses are communicable (they can be passed between people); both have been racialised, leading to racist and xenophobic attacks and stereotyping; community mobilisation has demanded adequate government public health responses for both health emergencies; and the impact of both viruses has highlighted the need for a global health approach which transcends borders.

When the World Health Organisation (WHO) declared Covid-19 a pandemic, many HIV organisations and activists advocated that the transmission of the novel coronavirus should not be criminalised. As public fear of Covid-19 grew, HIV advocates predicted the negative impact on public health and possibility of human rights violations, similar to those seen for people living with HIV.

“Despite the evolving scientific knowledge, criminalisation laws have been written and implemented across the world faster than the development of the general understanding of the virus itself”

This strain of coronavirus is new and scientists are developing their understanding of it. In the past few weeks, there has been confusion about the probability of asymptomatic transmission (transmitting the virus when a person does not have Covid-19-like symptoms), as the WHO had previously commented that it was “very rare” and later stated that this wording had misled people. Despite the evolving scientific knowledge, criminalisation laws have been written and implemented across the world faster than the development of the general understanding of the virus itself. Globally, countries have implemented or have proposed laws against Covid-19 transmission and even exposure, without transmission, including Canada, France, India, and South Africa.

Often, the aim of criminalisation is to facilitate a tool for prevention and deterrence (to discourage people from passing on a virus) or as punishment for those who have or may have passed on a virus. HIV advocacy has illustrated over the years that the criminalisation of transmission or exposure is ineffective, and disproportionately impacts marginalised communities and negatively impacts public health.

In their Statement on Covid-19 Criminalisation, published in March, the HIV Justice Worldwide Steering Committee wrote that hastily drafted laws, as well as law enforcement, driven by fear and panic, are unlikely to be guided by the best available scientific and medical evidence – especially where such science is unclear, complex and evolving. “Given the context of a virus that can easily be transmitted by casual contact and where proof of actual exposure or transmission is not possible, we believe that the criminal justice system is unlikely to uphold principles of legal and judicial fairness, including the key criminal law principles of legality, foreseeability, intent, causality, proportionality and proof.”

Since that statement was issued, internationally coronavirus laws have been weaponised against the most marginalised within society, as is the case with HIV criminalisation laws. The Ugandan government, for example, has used coronavirus laws to target marginalised LGBTQI+ groups, and in the UK, people of colour are fined more than the white population under coronavirus laws, in some cases leading to unlawful charges. In some cases people were even charged under the wrong law (e.g. enforcing Welsh law in England).

The director of legal services at the Crown Prosecution Service (CPS), the public agency that conducts criminal prosecutions in England and Wales, found that 24% of cases reviewed had been charged incorrectly. In May a CPS press statement cited the speed and pressure to implement the laws as the cause of the wrongful charges. Across the Global North, it has been well documented that racialised communities are disproportionately impacted by Covid-19 and the Human Rights Campaign Foundation anticipates that LGBTQI communities will be disproportionately impacted by the virus. This is due to a myriad of reasons underpinned by systemic discrimination.

HIV research has shown little evidence that criminalisation laws prevent transmission, in fact, it’s evidenced that such laws are bad for public health and fuel reluctance to get tested and treated. In the UK, testing and treatment of Covid-19 is free, as is the case with many other communicable diseases to remove the barrier to testing and treatment. Free testing and treatment access, irrespective of immigration status, is important, however, a briefing paper from Medact, Migrants Organise and New Economics Foundation (NEF), has shown that migrant communities blocked from healthcare because of the hostile environment, that “the coronavirus ‘exemption’ from charging and immigration checks is not working” and people have been asked to show their passports, and that people face additional obstacles such as language barrier and digital exclusion from emergency services.

Criminalisation exacerbates public health issues: in a Channel 4 report, Migrants Organise spoke of a man who died at home for fear of being reported to immigration authorities if he accessed healthcare. The threat of immigration enforcement disproportionately impacts those in precarious work and those with precarious migration status, all of whom are more likely to come from racialised groups and in some cases groups which are hyper-surveilled and criminalised.

The role of healthcare and access to it needs to be reimagined, where people are viewed as patients not passports and healthcare professionals are not the extended arm of the Home Office. Governments must implement better employment rights, so that employers are held to account and do not put staff such as Belly Mujinga, in harmful positions. Governments must provide better statutory sick pay so those in precarious work do not have to choose between their health and putting food on the table. We need to overhaul systemically discriminatory processes that don’t look after the most vulnerable, rather than implementing laws – such as criminalisation – that will systematically punish them.