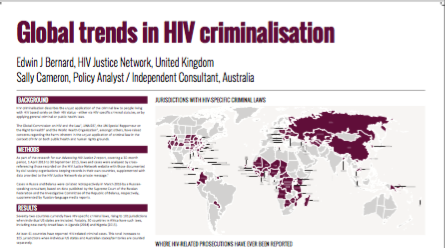 Today, at the International AIDS Conference in Durban, the HIV Justice Network and GNP+ will present important new data on HIV criminalisation based on updated research from our Advancing HIV Justice 2 report.

HIV criminalisation is a growing, global phenomenon that is seldom given the attention it deserves considering its impact on both public health and human rights, undermining the HIV response.

In many instances, HIV criminalisation laws are exceedingly broad – either in their explicit wording, or in the way they have been interpreted and applied – making people living with HIV (and those perceived by authorities to be at risk of HIV) extremely vulnerable to a wide range of human rights violations.

Seventy-two countries currently have HIV-specific laws, rising to 101 jurisdictions when individual US states are included. Notably, 30 countries in Africa have such laws, including new overly-broad laws in Uganda (2014) and Nigeria (2015).

At least 61 countries have reported HIV-related criminal cases. This total increases to 105 jurisdictions when individual US states and Australian states/territories are counted separately.

During the 30-month period: April 2013 to October 2015, we found reports of at least 313 arrests, prosecutions and/or convictions in 28 countries.

The highest number of cases during this period were reported in: