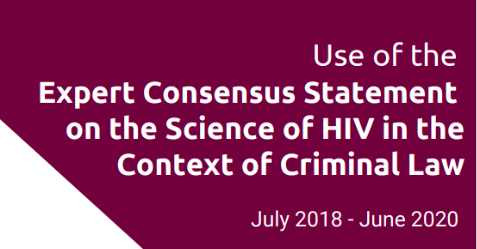 Two years ago this month saw the launch of the Expert consensus statement on the science of HIV in the context of criminal law (Expert Consensus Statement) at a press conference during AIDS2018 in Amsterdam, published in the Journal of the International AIDS Society (JIAS), and translated into French, Russian and Spanish.

Authored by 20 of the world’s leading HIV scientists, and endorsed by more than 70 additional expert scientists, as well as IAPAC, IAS and UNAIDS, the Expert Consensus Statement described current evidence on HIV transmission, treatment effectiveness and forensics so that HIV-related science may be better understood in criminal law contexts.

The Expert Consensus Statement was the end result of a multi-year process developed by a partnership comprising the International AIDS Society (IAS), the International Association of Providers of AIDS Care (IAPAC), the Joint United Nations Programme on HIV/AIDS (UNAIDS) and the HIV JUSTICE WORLDWIDE Steering Committee.

The HIV Justice Network has now published an interim scoping report, written by HJN’s Senior Policy Analyst Sally Cameron, that explores the impact of the Expert Consensus Statement in the two years since its publication.  It is now available in English and French (see bottom of page for download links).

The report concludes that the Expert Consensus Statement is meeting both its primary aim (to support defence arguments in HIV criminalisation cases) and its secondary aim (supporting lobbying for law and policy reform) in many jurisdictions. But it also found that the process of developing and promoting the content of the Expert Consensus Statement has delivered additional benefits that further support advocacy efforts to end HIV criminalisation.

In summary, the Expert Consensus Statement is being used to: