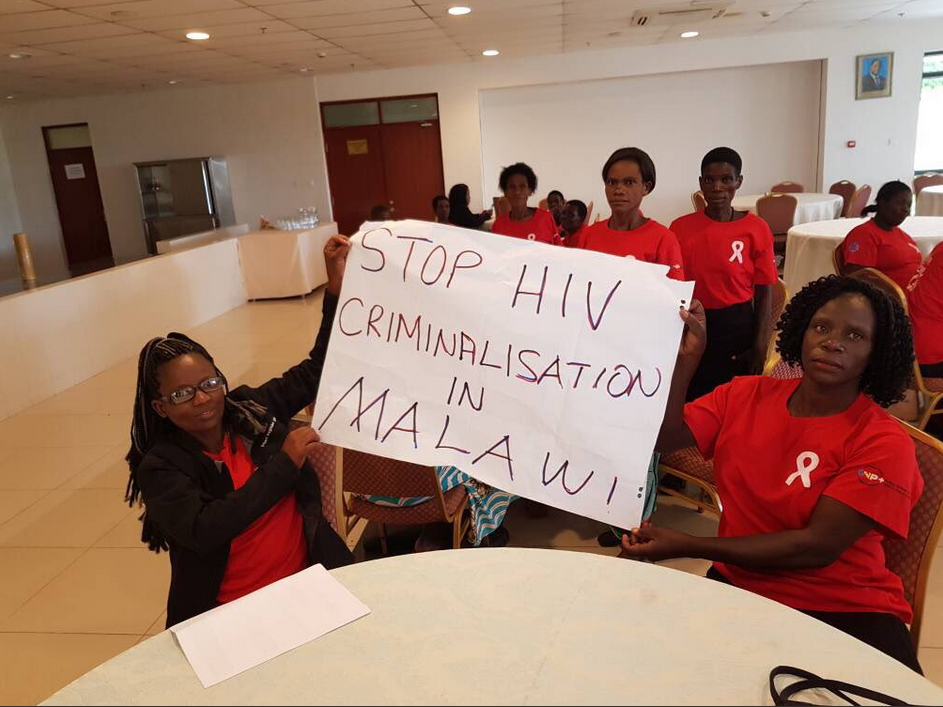 Activists and people living with and affected by HIV celebrated outside Parliament after having protested for months against rights-infringing provisions in the HIV Bill, tabled earlier this year. The Bill, which had its origins in a 2008 Law Commission Report, included provisions to make HIV testing and treatment mandatory for select populations on a discriminatory basis, and provisions that would criminalise HIV exposure and transmission, amongst others.

Civil society and activists argued that these provisions would violate the Malawi Constitution, be at odds with international best practice, and compromise the country’s efforts to advance HIV treatment and prevention.

On Tuesday, Members of Parliament debated amendments to the Bill advanced by Members and its HIV Committee. Minister of Health, Hon. Atupele Muluzi, urged Members to endorse these amendments when adopting the Bill, emphasizing that criminalising HIV had negative public health implications. Parliament voted to support all the amendments proposed by the HIV Committee and, in addition, voted to delete a contentious provision relating to “deliberate infection” with HIV. After a second reading, the Bill was passed subject to these amendments.

“It is thanks to women activists who fought to have their voices heard that Parliament has recognised that abandoning human rights protections will only drive vulnerability to HIV,” said Sarai-Chisala Tempelhoff of the Women Lawyers Association (WLA Malawi). “When the evidence tells us women and girls should be at the forefront of our response to HIV, it is important to understand the criminalisation would only increase the risk of violence and abuse that Malawian women face; strengthen prevailing gendered inequalities in healthcare and family settings; and further drive stigma, fear and discrimination around HIV.”

“Mandatory testing and treatment and criminalization of HIV transmission and exposure are counter-productive to reaching the goals of the HIV response in Malawi. We are glad our voices have been heard through the work of organisations like ICW Malawi, the Coalition of Women Living with HIV/AIDS (COWLHA), the Female Sex Workers Association, the Women Farmers Coalition and others. Human rights have prevailed today in Malawi.” said Clara Banya of the International Community of Women Living with HIV (ICW) Malawi.

“We are elated that Parliament has chosen to endorse a law based on evidence and reason and not on stigma and fear. It is people who are most marginalized in our society who would suffer most under coercive and criminalising laws – these are people who need society’s support, not punishment.” said Victor Mhango, Executive Director of the Centre for Human Rights Education, Advice and Assistance (CHREAA).

Gift Trapence, Executive Director of the Centre for the Development of People (CEDEP), agreed, “While we urgently need to embrace key populations to advance human rights and the HIV response in Malawi, the Bill was proposing to create further barriers. While the amended version adopted by Parliament does not speak to key populations directly, we must celebrate that at least it hasn’t added to the legal barriers as initially proposed.”

MacDonald Sembereka, Executive Director of the Mango Key Populations Network said, “As actors in the sector we urge for the prompt assent and implementation of the Act as it is long overdue.”

“We commend and support the incredible advocacy of Malawian civil society and women activists in particular who have refused to be silenced into accepting compromises on punitive laws and policies,” said Michaela Clayton, Director of the AIDS and Rights Alliance for Southern Africa (ARASA). “The role of human rights in an effective HIV response is as important now as it has always been.”

“While some provisions remain that are perplexing and of which we should remain wary (such as those placing duties on people living with HIV to adhere to treatment), Parliament’s acceptance of the amendments in the Act is a victory for citizens and supporters of human rights in Malawi who resisted efforts to enact the Bill in its original form at all costs,” said Annabel Raw, health rights lawyer at the Southern Africa Litigation Centre (SALC).

Laurel Sprague, Executive Director of Global Network of People Living with HIV (GNP+) said, “GNP+ applauds the remarkable community effort that focused on education, current science and best practices. Women living with HIV, sex workers, and women lawyers led the way in explaining why punitive laws harm the HIV response and ensuring that a human rights approach is at the centre of Malawi’s HIV response.”

The AIDS and Rights Alliance for Southern Africa (ARASA)

The Centre for the Development of People (CEDEP)

The Centre for Human Rights Education, Advice and Assistance (CHREAA)

The Global Network of People Living with HIV (GNP+)

The International Community of Women Living with HIV (ICW) Malawi