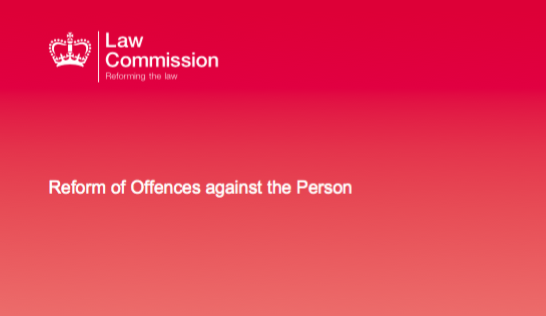 Following a scoping consultation which ran from autumn 2014 to spring 2015, the Law Commission (of England and Wales) has now published its report containing their final recommendations to the UK Government.

It recommends the adoption of a modified version of a 1998 draft Bill to replace the outdated Offences Against the Person Act 1861.

However, whereas the 1998 Bill only criminalised intentional disease transmission, their recommendation is to keep the existing law relating to HIV and other serious diseases ((based on Dica and Konzani and clarified through prosecutorial policy and guidelines) which criminalises reckless as well as intentional disease transmission, pending a wider review.

Both in the scoping consultation paper and in this report, we have considered the criminalisation of disease transmission at great length. Many consultees supported fundamental reform of the law in this area. However, we conclude that the issues were more complex than time or space allowed without delaying the main aim of reforming the law of offences against the person. For this reason, we suggest modifications to the draft Bill to preserve the present position pending a wider review involving more input from healthcare professionals and bodies.

The full report, (chapter six: ‘transmission of disease’ is excerpted in full below), includes a detailed discussion of their proposals and the responses of 35 concerned stakeholders (most of them experts in law, public health and human rights. The HIV Justice Network was one of them, and our opinions are quoted throughout.)

The entire report is of interest not just to those working on this issue in England & Wales, but globally.  It rehearses, in great detail, nearly all of the arguments for and against HIV (and other STI) prosecutions, and finds that “there is a strong body of opinion, especially in the medical profession and groups concerned with HIV and sexually transmissible infections, that the transmission of these diseases should never be criminal unless done intentionally.”

(1)  an offence of reckless transmission encourages people to choose not to be tested, so as not to have the awareness of risk that might constitute recklessness;

(2)  it discourages openness with (and by) medical professionals, because they may have to give evidence against their patients;

(3)  it encourages people to think that disclosure of HIV status is always a duty, and that if a potential partner has not mentioned his or her status then he or she is not infected;

(4)  because of the difficulty of proving transmission, the existence of the offence leads to very wide-ranging and intrusive investigations affecting a great many people, out of all proportion to the small number who will be found deserving of prosecution; and

(5)  the whole topic of HIV/AIDS is affected by an atmosphere of fear (often irrationally so), and there is still an undesirable stigma against people.

Nevertheless, although the report states that “it would be preferable to revert to the law as it stood in 1998” when prosecutions were not possible and to use the draft 1998 Bill as it stands (which would only criminalise the intentional transmisison of disease), it comes to a more conservative conclusion.

The discussion of this issue has almost exclusively concerned the transmission of disease by consensual sexual intercourse, and the transmission of HIV in particular. (Also, most of the evidence for the harmful effects of criminalisation is drawn from countries where there are specific offences concerned with HIV and STIs, and may not be relevant to the use of general offences of causing injury.) The same reasoning may well not apply to other diseases and other means of transmitting them, but the draft Bill excludes disease as a whole.

For these reasons, on the evidence we have we do not feel justified in recommending a change to the position in existing law, in which the reckless transmission of disease is in principle included in an offence of causing harm. If there is to be a change, this should follow a wider review which compares the position in different countries and gives full consideration to the transmission of diseases other than by sexual means.

Of note, and of global relevance, following a great deal of discussion (and a broad range of consultation responses) regarding whether not to create an HIV/STI-specific law and/or broaden the scope of the current law to include non-disclosure and/or potential or perceived exposure, the Law Commission is clear.

We do not recommend the creation of specific offences concerned with disease transmission, either in relation to disease in general or in relation to HIV and STIs in particular: this too would require a wider review of all the available evidence. Nor do we recommend an offence of putting a person in danger of contracting a disease, or an offence of failing to disclose an infection to a sexual partner.