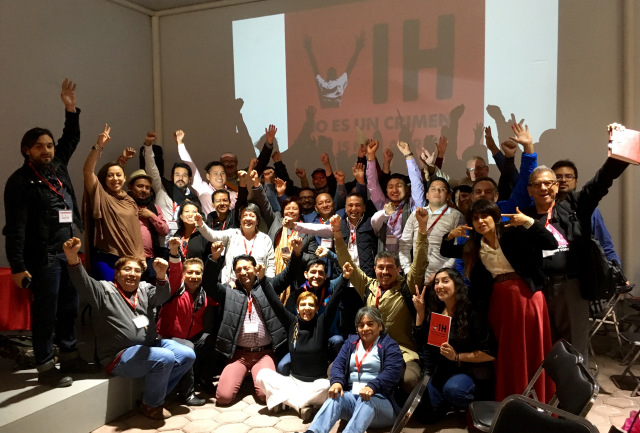 In October 2017 the first Spanish-language ‘HIV Is Not A Crime’ meeting took place in Mexico City, supported by the HIV JUSTICE WORLDWIDE coalition.

As well as learning about HIV criminalisation around the world; the global movement to end HIV criminalisation; and the importance of the leadership of Networks of People Living with HIV, participants discussed reform initiatives in the three states where specific problematic laws exist (Veracruz) or were recently proposed (and Quintana Roo and San Luis Potosí).

In 2015, the Congress of Veracruz approved a reform of the Penal Code in order to add to the crime “of contagion” the term “sexually transmitted infections” (STI), among which are HIV and HPV, to “try to prevent the transmission of such infections, mainly to (vulnerable) women and girls.” The penalty includes six months to five years in prison and a fine of up to 50 days minimum wage for anyone who “maliciously” infects another person with an STI.

In San Luis Potosí, the governor, Juan Manuel Carreras López, proposed reforms to the Criminal Code, including the creation of article 182 bis, to punish “the person knowing that he is a carrier of a sexually transmitted disease. ..) endangers the health of another person through sexual intercourse “.  Thanks to quick action by local activists, the proposed reforms did not pass.

In Quintana Roo, last year Congresswoman Laura Beristain proposed reforming Article 113 of the Criminal Code to punish anyone who transmits HIV with up to 25 years in prison.  A few weeks ago, following a meeting with activists including those who attend the ‘HIV is not a crime meeting’, she committed to dropping the proposal.

In addition to these HIV-specific laws, the meeting heard that 30 the 32 states that make up the Mexican Republic have a public health law that sanctions exposure to sexually transmitted infections.  Only the states of Aguascalientes and San Luis Potosí do not have this law.

According to data from Letra S, at least 39 people have been prosecuted under this law between 2000 and 2016 on suspicion of having transmitted a sexual infection and / or HIV. The state with the highest number of registered cases is Veracruz, with 15; Sonora follows, with nine; Tamaulipas and State of Mexico, with five; Chihuahua, with three, and Mexico City and Nuevo León with a case.

As a result of the meeting, the Mexican Network of organisations against the criminalisation of HIV was formed, bringing together 29 organizations from all over the country. During, and immediately following the meeting, the Network drafted an 11-point Declaration addressed to various governmental agencies in charge of responding to the epidemic, as well as to society in general.

Among the key points in the Declaration, they note that the Mexican State is required to assume the commitment to guarantee an integrated response to HIV (prevention, timely diagnosis and comprehensive attention) and stresses that it is not the task of the judicial authorities to develop and implement measures to prevent transmission of HIV.

The declaration also emphasises that the criminalisation of HIV exposure through “risk or danger of HIV infection” and other public health statutes that appear in the laws of individual Mexican states are generating more harm than good in terms of impact on public health, in addition to preventing the guarantee of respect for the human rights of people with HIV.

With two weeks of the meeting, Network representatives met with Congresswoman Laura Beristain, who had proposed the new unjust, overly broad HIV criminal law in Quintana Roo. She listened to their arguments, read the Declaration, and immediately gave a firm commitment to repeal Quintana Roo’s problematic provisions in Article 113.

Watch and share short video below about the meeting and the Network’s immediate advocacy win.