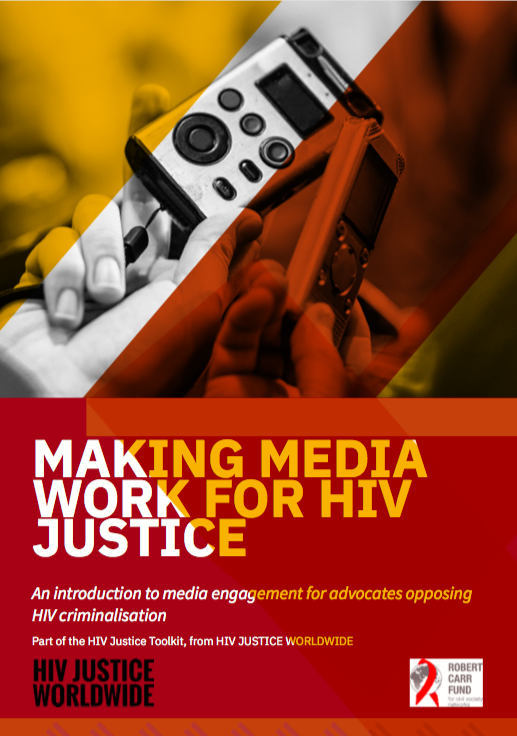 When it comes to the widely misunderstood, complex issue of HIV criminalisation, media can be a powerful tool–or a blunt-force weapon.

And so today, as people around the world living with HIV continue to be criminalised and convicted at alarming rates, HIV JUSTICE WORLDWIDE has released “Making Media Work for HIV Justice: An introduction to media engagement for advocates opposing HIV criminalisation.”

The new resource is the latest addition to the HIV JUSTICE Toolkit, which provides resources from all over the world to assist advocates in approaching a range of advocacy targets, including lawmakers, prosecutors and judges, police, and the media.

The purpose of this critical media toolkit is to inform and equip global grassroots advocates who are engaged in media response to HIV criminalisation–and to demystify the practice of working with, and through, media to change the conversation around criminalisation.

“As advocates work to build community coalitions and consensus about the importance of limiting and ending HIV criminalisation, we need to articulate our common positions to the public and to decision-makers; thus, working with the media is critically important,” says Richard Elliott, Executive Director of the Canadian HIV/AIDS Legal Network and a member of the HIV JUSTICE WORLDWIDE Steering Committee. “Also, particularly in settings where sexual assault laws are used to criminalise people living with HIV, it is important to communicate via the media why this misuse of the criminal law is harmful to women.”

“With HIV rarely making front page news anymore, the highly sensationalised reporting of criminalisation cases–which most often contains little in the way of facts or science–paints a dehumanising picture of people living with HIV,” says Jennie Smith-Camejo, Communications Director for PWN-USA. “This kind of coverage can and does destroy real lives of those affected by HIV criminalisation laws, while fueling and feeding misinformation and stigma.”

The toolkit also includes a number of case studies providing examples of how media played a significant role in the outcome, or the impetus, of HIV criminalisation advocacy.

“I have been monitoring media coverage of speculations, arrests, prosecutions, and convictions of people living with HIV, and also legal and policy proposals for new laws and/or reform, for more than a decade,” notes Edwin J Bernard, Global Co-ordinator of the HIV Justice Network and a member of the HIV JUSTICE WORLDWIDE coalition. “It’s time for the injustice to end. ‘Making Media Work for HIV Justice’ is a long-overdue welcome addition to the HIV JUSTICE Toolkit, and an important step towards realising a world where people living with HIV are not singled out by the criminal justice system simply for having a virus.“

“Making Media Work for HIV Justice: An introduction to media engagement for advocates opposing HIV criminalisation” was supported by a grant from the Robert Carr Fund for Civil Society Networks. It  will also be translated into French, Spanish, and Russian later this year.

This 90 minute webinar introduced attendees to some of the concepts and practices highlighted in the toolkit, and featured formidable activists, journalists, communications professionals, and human rights defenders working at the intersection of media and HIV criminalisation.

HIV JUSTICE WORLDWIDE is an initiative made up of global, regional, and national civil society organisations–most of them led by people living with HIV–who are working together to build a worldwide movement to end HIV criminalisation. All of the founding partners have worked individually and collectively on HIV criminalisation for a number of years.

To learn more and to join the movement, visit: http://www.hivjusticeworldwide.org.

Download the media release as a pdf here: http://bit.ly/HIVJusticeToolkitMediaRelease