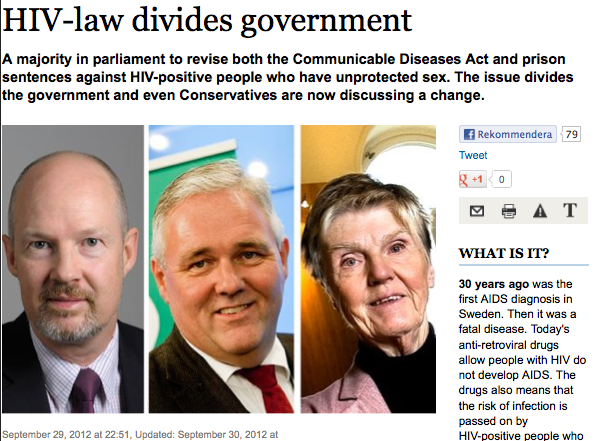 Two articles commemorating 30 years of HIV in Sweden in Svenska Dagbladet by journalist Tobias Brandel suggest that public – and political – opinion is being positively impacted by a two-year campaign by RFSU (the Swedish Association for Sexuality Education), HIV-Sweden, and RFSL (the Swedish Federation for Lesbian, Gay, Bisexual and Transgender Rights) to raise awareness and advocate against overly-broad HIV criminalisation.

The first article, with the headline, ‘HIV-positive convicted harsher in Sweden‘ focuses on the fact that although HIV has been transformed from a fatal to a chronic disease, more people with HIV have been jailed in Sweden in the 2000s than in the 1980s and ’90s combined.

The second, with the headline, ‘HIV-law divides Government’ highlights the fact that a majority of MPs want to revise both the Communicable Diseases Act (with its ‘information obligation’) and the criminal law that currently allows prosecutions for people with HIV for potential or perceived HIV exposure as well as transmission. However, there are divisions within both the coalition Government and the leading opposition parties.

Since these articles are the most up to date descriptions of the current moves towards law and policy reform in Sweden, I am including (in English via Google translate, with slight amendments for clarity) the full text of both articles below.

When Joakim Berlin received his diagnosis, HIV was a death sentence.

“The big question my relatives asked was when I was going to die. Of course, I thought it would go pretty quickly,” he says.

It was 1991, five years before the arrival of antiretroviral drugs. Today he leads a “totally normal” life.

“Sometimes I get side effects such as cramps and fatigue. But HIV’s biggest impact has been on my social life. Human ignorance is problematic. The fear is still there.” Neither legislation nor case law has followed the progress of medicine. Although HIV has been transformed from a fatal to a chronic disease more people with HIV have been jailed in Sweden in the 2000s than in the 1980s and ’90s combined. Anyone who has HIV – and knows it – and has unprotected sex with another person is at risk of prosecution for ‘aggravated assault’, ‘attempted aggravated assault’ or ‘creating danger’.

The last year has seen four such convictions in Sweden,  according to a review by Svenska Dagbladet. All have resulted in prison sentences – even though they were not convicted of infecting their sexual partners. Only in one case was found to be HIV-positive plaintiff, but failed to clarify whether it was the offender who infected him.

A total of 44 people have convicted of crimes related to HIV since the late 1980s. This makes Sweden one of the countries in the world with the largest number of prosecutions in relation to the number of HIV-positive people, according to the Global Criminalisation Scan.

Sweden was also singled out as a bad example of how the law is used against people with HIV at the International AIDS Conference in Washington last summer. Even UNAIDS, the UN organisation for HIV / AIDS, criticises Sweden.

Ake Örtqvist, an infectious disease physician for Stockholm County Council, is critical of the Swedish court’s reasoning over risk and intent.

“The courts judge very differently which is very unfortunate. Courts and prosecutors should have an increased knowledge about the disease and the concept of risk,” he says.

“The impact that treatment has in lowering viral load and infectiousness is very real, even if it is scientifically always hard to say zero. I think the courts reasoning is odd and they should embrace the fact that infection risk today is extremely small. One must ask whether it is reasonable to judge according to the Penal Code when the infection is well controlled and transmission has not occurred,” said Jan Albert, Professor of Infectious Disease at the Karolinska Institute. In other words, the virus is spread very rarely by “HIV-men” as the condemned is usually called in the media. The real vectors are people who do not know they have HIV and therefore do not receive treatment.

According to the Communicable Diseases Act HIV-positive individuals must inform their sex partners of their status before having sex. Although it is not possible to judge according to the Infectious Diseases Act so courts often refer to information obligations.

Both RFSL and RFSU argue that the law is actually counter-productive.

“Of course you should tell if you have HIV before sex, but you should not risk punishment if you fail to do so. Criminalisation can also lead to a false sense of security, to believe that the person who is not saying anything does not have HIV,” says RFSU President Kristina Ljungros.

She also believes that the prosecutions may deter people from testing. Even the UN-backed Global Commission on HIV and the Law concludes in a new report that criminalisation contributes to fewer people knowing their HIV status.

Preliminary data from a new U.S. study, received by Svenska Dagbladet, supports these ideas. The Sero Project, in collaboration with Eastern Michigan University interviewed more than 2000 HIV-positive individuals in the United States. Half of the respondents believe that it is reasonable to avoid HIV testing for fear of prosecution, and one in four say they know one or more individuals who chose not to test for fear of being prosecuted.

Joakim Berlin has lived with the virus for over 20 years and works at Positive Group West [part of HIV Sweden] as well as being a member of RFSL’s board.

“It is the responsibility of both parties to protect themselves, so you cannot have laws that criminalise only one party,” he said.

Is it not reasonable to tell your sexual partner so that he can make an informed decision?

Legislation and case law surrounding HIV has not kept pace with developments in medicine, as Svenska Dagbladet showed yesterday. Although modern HIV treatment reduces infectiousness dramatically, the law is the same as in the 1980s. There is now a majority in parliament who want a review of the Communicable Diseases Act, which forces people with HIV to disclose their status before having sex.

“We think that the issue should be revisited. Our knowledge about HIV is changing rapidly. We can not have laws that are outdated,” says Barbro Westerholm, Liberal Party social policy spokesperson.

As previously reported to Svenska Dagbladet both infectious disease doctors and scientists are critical of Swedish courts that sentence HIV-positive people to prison for unprotected sex, despite there being no alleged transmission. As well as revisiting the Communicable Diseases Act, the Liberal Party would  like there to be a review of judicial practice.

The position of the Moderate Party is that there is no need for such a review, but the Party is now in discussion.

“We have not changed our minds, but we’re talking about it. It is clear that we must keep up with new facts and analyses. There is a debate,” says Mats Gerdau, a member of the social committee [which would recommend such a review to the Government].

The Centre Party is open to an amendment of the Penal Code in respect of how the courts reason about intentional and negligent [states of mind] – but they are clearly against removing the Communicable Diseases Act’s notification requirement.

“There is an information obligation for all diseases that are generally hazardous. It is completely illogical to say that it should be removed only for HIV,” says Anders W Jonsson, chairman of the social committee.

The Christian Democrats see no need for any kind of review. All four Alliance parties must agree before the law can be reviewed. The [opposition] Social Democrats, The Green Party and the Left are all clear that they want the information requirements to be removed for HIV.

“The law is counterproductive. It places responsibility solely on the person with HIV. It is a repressive law which, at worst, means people do not get tested,” says Eva Olofsson (Left), also a member of the social committee.

Agneta Luttropp (Greens), another member of the social committee, believes that the law creates a false sense of security.

“The responsibility to protect is on both sides, on both the person who may have HIV and the person who does not. We hope and believe that a change in the law could lead to people being more invested in having protected sex,” she says.

However, the Social Democrats want to keep the information obligation and do not believe that judicial practice needs to be reviewed.