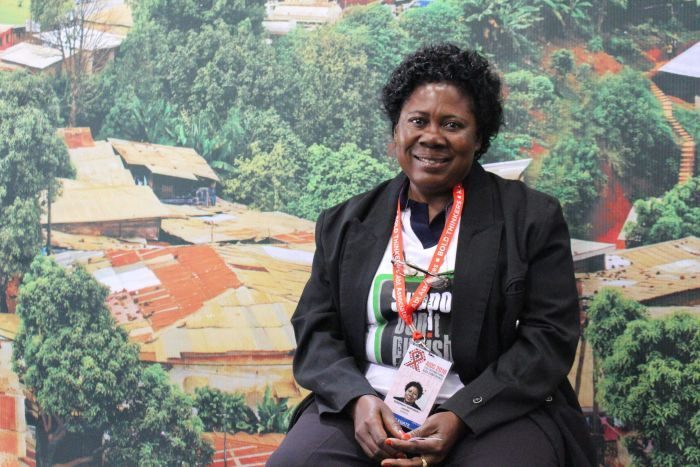 This seven minute audio report from AIDS 2016 in Durban is excerpted from ABC Radio’s longer podcast, The brutal politics of a virus that won’t go away, by reporter Natasha Mitchell for Background Briefing.

The transcript of Natasha’s HIV criminalisation-related report is below.

Natasha Mitchell: In Uganda, around 7% of people are infected, and while the country is recognised for taking decisive action against HIV, the government’s harsh attitude and laws is dramatically undermining that progress.

Rosemary Namubiru is a 66-year-old nurse, mother and grandmother. She found out she had the virus just three years ago, and she thinks she got it from a patient.

Rosemary hadn’t yet disclosed her status at work, but when she was wrongly accused of intentionally infecting a patient, before she knew it the full force of the law was thrown at her.

Rosemary Namubiru: I saw the police coming, and they were holding me, ‘You are under arrest for murder.’ Then they called the media, so when I was in that room they called and told me, ‘Come out.’ I came out and I found a crowd of cameramen, media people.

Natasha Mitchell: Outside the police station?

Natasha Mitchell: Rosemary was charged with attempted murder after she accidentally pricked herself with a needle while treating a child. The mother watching on was worried and reported Rosemary. While the child wasn’t infected, thankfully, all hell broke loose when Rosemary’s HIV positive status was confirmed and made public. Rosemary was arrested and paraded in front of the media, who labelled her a ‘killer’ and a ‘murderer’.

Rosemary Namubiru: They were trying to manhandle me. They were taking photographs of me. They were calling me all sorts of names, ‘Murderer, killer. Look at this woman, a killer, a murderer.’ And it went all over the country in the national newspapers, in the English newspapers. ‘That murderer, the murderer. If we see her we shall beat her, we shall kill her.’ It was the talk of town. Even my village. Initially, they labelled it as ‘murder’. Then it was reduced, ‘attempted murder’, and then it was eventually changed into ‘negligence’.

Natasha Mitchell: Rosemary was publicly shamed, and sentenced to three years in prison for negligence.

Lawyer Dora Kiconco Musinguzi is the executive director of Uganda Network on Law, Ethics and HIV/AIDS or UGANET.

Dora Kiconco Musinguzi: Rosemary’s story sent so many chills across the country amongst people living with HIV. She was the headline of the news. ‘Killer nurse’. ‘Monster nurse’. She was treated so cruelly at the police, she was beaten, her hair was pulled, right, left, and centre, and that caused a lot of fear among people living with HIV. So we see discrimination written on walls, written in political statements, discrimination is still real, so that is where we are. That’s Uganda’s story currently.

Natasha Mitchell: Rosemary Namubiru was released at the end of 2014 after her case received international attention.

In the same year, Uganda introduced the HIV Prevention and Control Act. At face value it’s about controlling HIV, promoting testing and treatment, and preventing discrimination. Uganda’s not alone here, HIV specific criminal laws are on the increase worldwide, and also exist in America and Europe.

But Dora Kiconco Musinguzi and colleagues are leading a legal challenge in the Ugandan Constitutional Court against key parts of the law, including certain provisions that demand disclosure of your HIV status, and criminalise those who transmit the virus intentionally.

Dora Kiconco Musinguzi: The question is at what point do you establish intention. In a circumstance where we have so many people that have not yet tested, how do you know that a person infected another? So anybody could blame the other for infecting them, and what should be a human condition, a disease, then becomes a criminal object and lives break, and families break, and you know how the media picks on this, and totally takes it out of context. We believe it’s going to be really dangerous.

Natasha Mitchell: At least half of the Ugandan population still don’t know their HIV status. And Dora Kinconco Musinguzi believes the HIV Prevention and Control Act will exacerbate their reluctance to get tested and treated and so cause the virus to spread.

Dora Kiconco Musinguzi: So if people fear, relate HIV testing with obligation, with imprisonment, with undue power of the law, we believe this is going to create a bigger barrier to testing, and that fails the objective of prevention and control because then we shall have more people left out of the treatment area.

Natasha Mitchell: And because pregnant women have to be tested for HIV, they’re at greater risk under this law.

Dora Kiconco Musinguzi: They are going to be found to be HIV positive fast, and if they don’t disclose then they are in the ambit of attempting to transmit, so that makes the women criminals. So there’s lots of unanswered questions. And yet on the other side science has given us hope that people who test and take their medicines very well, they become less infectious, so they don’t transmit HIV. The law neglects this science. The law does not consider what public health specialists are saying, but the Ugandan government has not put this into consideration.

Natasha Mitchell: The experience of Rosemary Namubiru is a cautionary lesson about why laws that criminalise HIV positive people can be so bad for public health.

Dora Kiconco Musinguzi: You shouldn’t be criminalised. These cases could be handled in another way. We are really asking the Constitutional Court to find out whether this is the law that will present and control HIV, and still afford dignity and non-discrimination for living with HIV.

Natasha Mitchell: Based on your experience, Rosemary, what do you feel about the criminalisation law in Uganda against people with HIV?

Rosemary Namubiru: It hurts. Ignorance kills, but it hurts when people just carry on, and people keep on saying, ‘Oh, that one, that one.’ Me, I didn’t get it sexually. It was during the course of saving lives of human beings, so it is not something to laugh about. I wouldn’t wish anybody to go through what I went through.