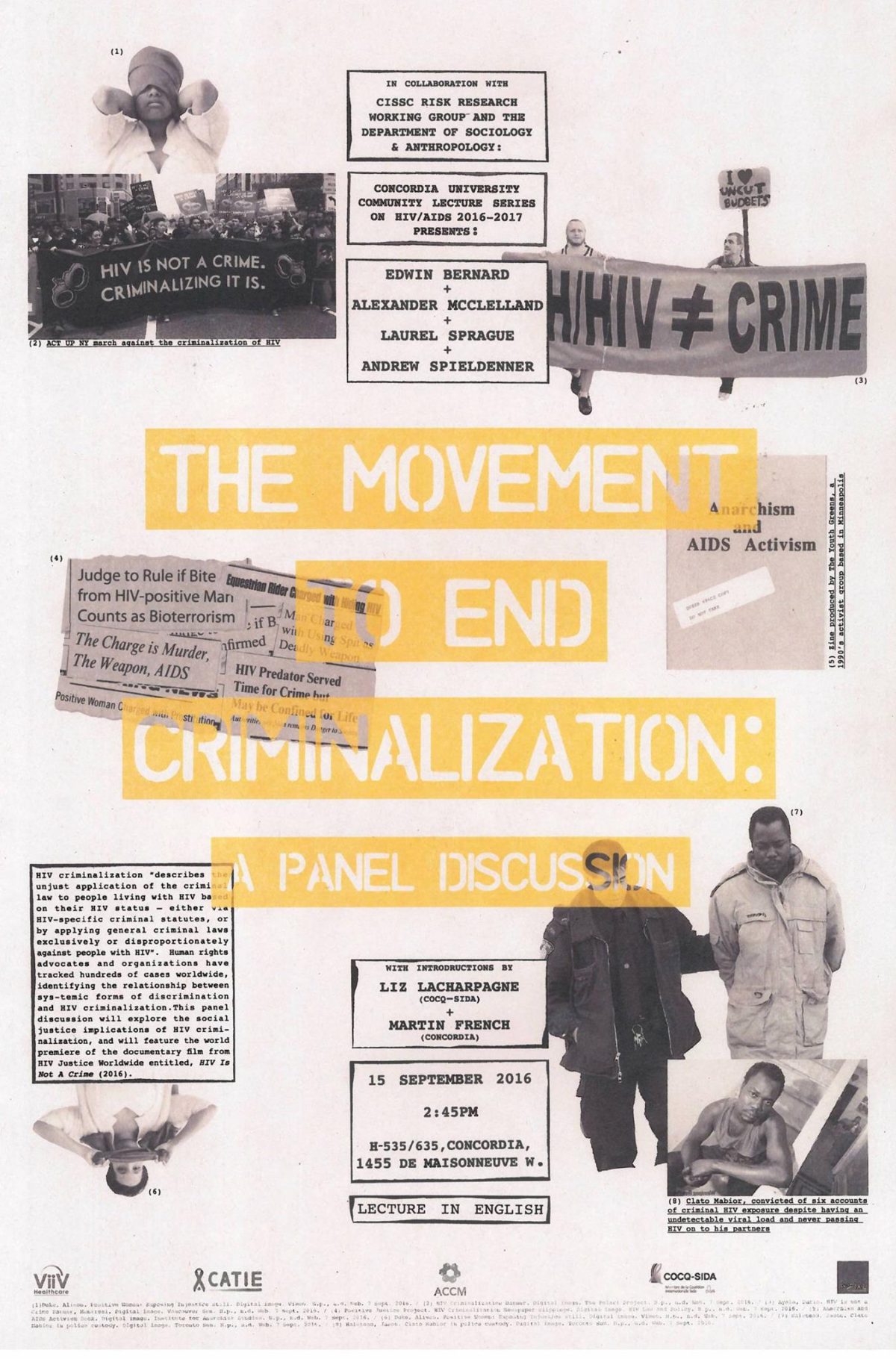 The meeting, introduced by Liz Lacharpagne of COCQ-SIDA and by Martin French of Concordia University – who put the lecture series together – was extremely well-attended, and resulted in a well-written and researched article by student jounrnalist, Ocean DeRouchie, alongside a strong editorial from Concordia’s newspaper, The Link.

(The full text of both article and editorial are below.) The Movement to End HIV Criminalization

by Ocean DeRouchie — Published September 19, 2016 in The Link

The sentiment surrounding HIV/AIDS is often one of discomfort. But the reluctance to speak openly about such a significant and impactful disease is hurting the people closest to it.

Under current Canadian legislation, HIV non-disclosure is criminalized. It exercises some of the most punitive aspects of our criminal justice system, explained Alexander McClelland, a writer and researcher currently working on a PhD at Concordia.

McClelland was one of four panelists speaking under Concordia’s Community Lecture Series on HIV/AIDS on Thursday, Sept. 15 in the Hall building. The collective puts on multiple panel-based events in order to address the attitudes, laws, and intersections of political and socioeconomic stigma surrounding HIV/AIDS.

There are three distinct charges that guide prosecutors in HIV cases—transmission (giving the disease to someone without having disclosed your status), exposure (e.g. spitting or biting) and non-disclosure (not informing a sexual partner about your HIV/AIDS status).

Aggravated sexual assault and attempted murder are some of the charges that defendants often face, explained Edwin Bernard, Global Coordinator for the HIV Justice Network, during the discussion.

While there are clearly defined situations in which you are legally obligated to tell a sex partner about your HIV status, there are no HIV-specific laws. This results in the application of general law in cases that are anything but general.

In 2012, the Supreme Court of Canada established that “people living with HIV must disclose their status before having sex that poses a ‘realistic possibility of HIV transmission.’”

Aidslaw.ca presents a clear map of situations in which you’d have to tell a sex partner about your status because, in fact, it is not in all scenarios that you’d be legally required to have the discussion.

A lot of it depends on your viral load—the amount of measurable virus in your bloodstream, usually taken in milliliters. A “low” to undetectable viral load is the goal, and is achieved with anti-viral medication.

Treatment serves to render HIV-positive individuals non-infectious, and therefore lowering the risk of transmission. A “high” viral load indicates increased amounts of HIV in the blood.

If protection is used and with a low viral load, one might not have to disclose their status at all.

That said, there is a legal obligation to disclose one’s HIV-positive status before any penetrative sex sans-condom, regardless of viral load. You’d also have to bring it up before having any sex with protection if you have a viral load higher than “low.”

But not all sex is spelled out so clearly.

Oral sex, for instance, is a grey area. Aidslaw.ca says, “oral sex is usually considered very low risk for HIV transmission.” They write that “despite some developments at lower level courts,” they cannot say for sure what does not require disclosure.

There are “no risk” activities. Smooching and touching one another are intimate activities that, as health professionals say, pose such a small risk of transmission that there “should be no legal duty to disclose an HIV-positive status.”

Moving Up, and Out of Hand

Court proceedings are based on how the jury and judge want to apply general laws to specific instances. There are a lot of factors that can influence the outcome.

The case-to-case outlook leads to the criminal justice system dealing with non-disclosure in such a disproportionate way, said McClelland.

The situation begs the question: “Why is society responding in such a punitive way?” asked McClelland.

This isn’t to say that not disclosing one’s HIV status “doesn’t require some potential form of intervention,” he explained, adding that intervention could incorporate counseling, mental-health support, encouragement around building self-esteem and learning how to deal and live with the virus in the world. “But in engaging with the very blunt instrument that is the criminal law is the wrong approach.”

He continued to explain that the reality of the criminalization of HIV ultimately doesn’t do anything to prevent HIV transmission.

“It’s just ruining people’s lives,” said McClelland, who has been interviewing Canadians who have been affected by criminal charges due to HIV-related situations. “It’s a very complex social situation that requires a nuanced approach to support people.”

The Community AIDS Treatment Information Exchange, a Canadian resource for information on HIV/AIDS, states that about 75,500 Canadians were living with the virus by the end of the 2014, according to the yearly national HIV estimates.

That number has gone up since. On Monday, Sept. 19, Saskatoon doctors called for a public health state of emergency due to overwhelmingly increasing cases of new infections and transmission, according to CBC.

In Quebec, there have been cases surrounding transmission and exposure. In 2013, Jacqueline Jacko, an HIV-positive woman, was sentenced to ten months in prison for spitting on a police officer—despite findings that confirm that the disease cannot be transmitted through saliva.

In this situation, Jacko had called for police assistance in removing an unwelcome person from her home. Aggression transpired between her and the officers, resulting in her arrest and eventually her spitting on them, according to Le Devoir.

“[This case] is so clearly based on AIDS-phobia, AIDS stigma and fear,” added McClelland, “and an example of how the police treat these situations and use HIV as a way to criminalize people.”

Police intervention is crucial in the fight against HIV criminalization. McClelland urged people to consider the consequences of involving the justice system in these kinds of situations.

“It’s important to understand that the current scientific reality for HIV is that it’s a chronic, manageable condition. When people take [antivirals] they are rendered non-infectious,” he said. “They should then understand that the fear is grounded in a kind of stigma and historical understanding of HIV that is no longer correct today.”

The first instinct, or notion of calling the police in an instance where one feels they may have been exposed to the virus in some way is “mostly grounded in fear and panic,” he said.

“[Police] respond in a really disproportionate, violent way towards people—so I would consider questioning, or at least thinking twice before calling the police,” McClelland explained.

On the other hand, he suggested approaching the situation in more conventional, educational and progressive methods.

“I think it could be talked through in different ways—by going to a counselor, talking to a close friend, engaging with a community organization, learning about HIV and what it means to have HIV, and understanding that the risk of HIV transmission are very low because of people being on [antivirals].”

As for the current state of Canadian legislation, there are a lot of complexities that hinder heavy-hitting changes to the laws.

Due to the Supreme Court’s rulings in 2012, they are unlikely to review the decision for another decade. For now, the main course of action is “on the ground,” said McClelland. From mitigating people from requesting police involvement in order to “slow down the cases,” to raising awareness through events such as Concordia’s Community Lecture Series, and engaging with the people to resolve issues in community-based ways and collective of care.

Then, McClelland said, “trying to do high-level political advocacy to get leaders to think about how they can change the current situation” would be the next step.

Editorial: Community-Based Research is the Key to HIV Destigmatization and Decriminalization

Receiving an HIV-positive diagnosis is already a life sentence. The state of Canada’s legal system threatens to give those living with the virus another one.

An HIV diagnosis is accompanied by its own set of complexities that are not encompassed in Canada’s criminal law. By pushing HIV non-disclosure cases into the same box as more easily defined assault cases, we are generalizing an issue that frankly cannot be simplified.

This does not reflect the reality that one faces when living with HIV. Criminalizing the virus further stigmatizes what should and could be everyday activities.

This puts the estimated 75,000 Canadians living with HIV at risk of being further isolated. This takes us backwards, considering the scientific progress that has been made to make living with the virus manageable. Under the proper antiviral medication, one’s risk of transmitting the disease is incredibly low. This stigma is rooted in an antiquated understanding of what HIV is and the associated risks—much of that fear having emerged primarily as a result of homophobia.

Further, with over 185 cases having been brought to court, Canada is leading in terms of criminalizing HIV non-disclosure. This pushes marginalized communities farther away. According to estimates from 2014, indigenous populations have a 2.7 higher incidence rate than the non-indigenous Canadian average. Gay men have an incidence rate that is 131 times higher than the rest of the male population in Canada.

As of Sept. 19, doctors in Saskatchewan are calling on the provincial government to declare a public health state of emergency, with a spike in HIV/AIDS cases around the province.

In 2010, it’s reported that indigenous people accounted for 73 per cent of all new cases in the province. Outreach and treatment for these communities are at the forefront of Saskatchewan’s doctor’s recommendations for the government.

With such a highly treatable virus, however, the problem should never have gone this far. It is an excerpt from a much bigger issue.

As we can see from the available statistics, HIV—both the virus and its criminalization—is a mirror for broader inequalities that exist within society. HIV related issues disproportionately affect racialized people, gender non-conforming people, and other marginalized groups.

Discussions around HIV also must include discussions around drug use. The heavy criminalization of injection drugs has created a context where users are driven deep underground, thus putting them at an incredibly high risk for contracting the virus. Treating drug use as a health rather than a criminal issue is an integral part of any effective HIV prevention strategy. Safe injection sites, such as Vancouver’s InSite, have made staggering differences in their communities and prove to be a positive way of combating the spread of HIV.

This is just one of the many ways that we can control the spread of HIV without judicial intervention, without turning the HIV-positive population into criminals.

Using community-based research enables us to not only understand the needs of the affected population—particularly when it comes to understanding the almost inherent intersectionality associated with the spread of HIV—but also allows us to better target our resources towards those who need it most.

Often times, that stretches to include those closest to HIV-positive individuals. Spreading awareness, and developing resources and a support network for them is just as important in fighting the stigmatization of the virus.

The disclosure of one’s HIV status is important. Jailing those who don’t disclose it, however, won’t make the virus go away. It simply isolates the problem, places it out of site and out of mind.

Criminalizing HIV patients is less about justice than it is about appeasing the baseless fears of the general population. It’s time for a more effective solution.