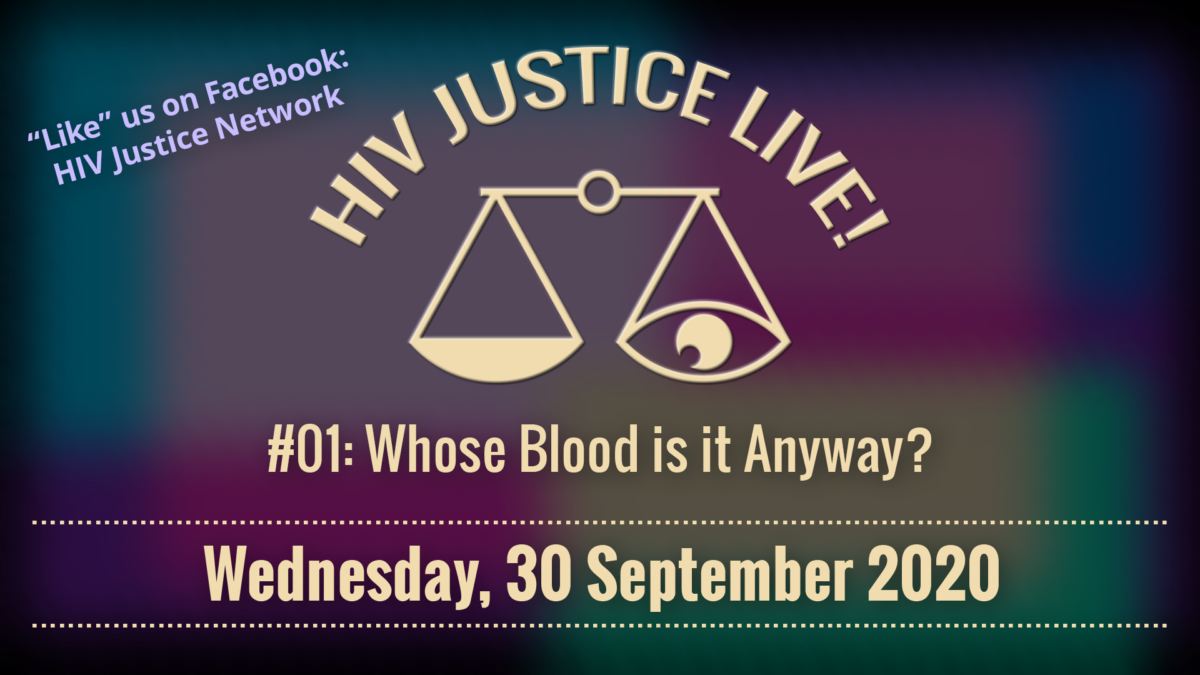 A series of articles and editorials in the October 2020 issue of the American Journal of Bioethics published last Friday examine a growing concern amongst community leaders of people living with HIV and our scholarly allies: the use of blood taken from people living with HIV during routine testing prior to starting or changing antiretroviral therapy in surveillance databases, without our permisssion, for public health purposes.

This is already taking place across the United States and in some Canadian provinces, and is currently being considered elsewhere in the world.

The rollout of so-called ‘molecular HIV surveillance’ to identify ‘clusters’ of transmissions to attempt to further improve public health responses to HIV is a growing source of anxiety and concern for people living with HIV in the US and Canada, especially for people who are already marginalised and criminalised in other ways, because they can’t be certain that this data won’t be shared with law enforcement or immigration authorities, which can lead to prosecution and/or deportation.

Coming to Facebook Live on 30th September – HIV Justice Live! Whose Blood is it, Anyway?  Like or follow us on Facebook to watch and participate in the first of our new interactive webshows, which will focus on molecular HIV surveillance.

In our lead guest editorial, entitled ‘We Are People, Not Clusters!’ which I co-authored with Alexander McClelland, Barb Cardell, Cecilia Chung, Marco Castro-Bojorquez, Martin French, Devin Hursey, Naina Khanna, Brian Minalga, Andrew Spieldenner, and Sean Strub, we support the concept of “HIV data justice” put forth in the lead target article, by Stephen Molldrem and Anthony Smith, Reassessing the Ethics of Molecular HIV Surveillance in the Era of Cluster Detection and Response: Toward HIV Data Justice.

“HIV data justice draws on the collective resources of the HIV/AIDS movement to build new alliances aimed at providing affected individuals and communities with greater control over how their data are utilized in the healthcare system, with the paired aim of providing them with greater access to better services on terms of their own choosing.”
Molldrem and Smith

In the editorial, we welcome Molldrem and Smith’s critique of the controversial rollout of molecular HIV surveillance (MHS) in the United States, which explores three intersecting concerns:

(1) the non-consensual re-purposing of personal health information and biomaterial for public health surveillance;

(2) the use of molecular HIV surveillance data in larger databases to find ‘clusters’ of infections and to make determinations about transmission directionality, and the criminalising implications that follow such determinations; and

(3) the way MHS amplifies the targeting and stigmatisation of already oppressed and marginalized communities.

The editorial questions the rationale behind the use of MHS as one of four pillars of the US Centres for Disease Control (CDC) End The Epidemic (ETE) Plan and calls for the abolition of molecular HIV surveillance in the United States as it is currently being rolled out by the CDC because it blurs the boundaries between consent and criminalisation.

Instead, we envision a future of new participatory and intersectional racial and viral justice possibilities, one which ensures the lives, voices, self-determination, and autonomy of people living with HIV are central to HIV research and public health practice. 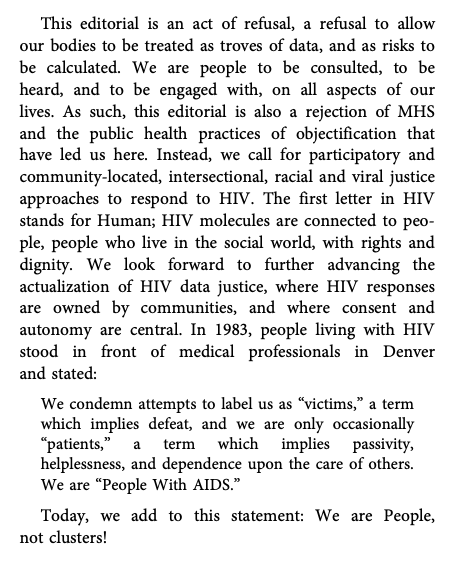