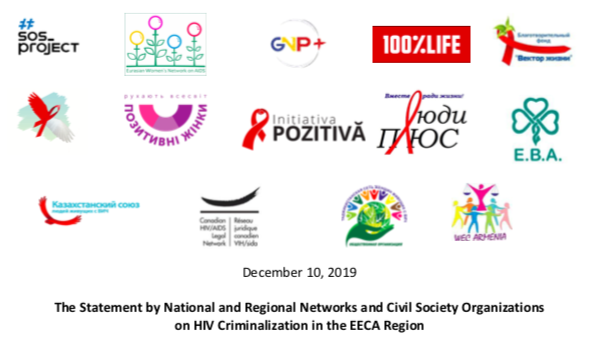 Today, December 10, 2019, Human Rights Day, National and Regional Networks and Civil Society Organizations on HIV Criminalization in the EECA Region are asking you to support the movement against HIV criminalization by endorsing the following Statement.

Download a pdf of the Statement in English or Russian.

HIV criminalization is a global issue that undermines human rights and impedes the development of public health and, as a result, weakens the efforts to eradicate the HIV epidemic. An analysis of recent HIV criminalization cases shows that they do not reflect the demographics of local epidemics, and the likelihood of persecution is compounded by discrimination against marginalized groups on the basic of drug use, ethnicity, gender identity, immigration status, sex work and sexuality.

The Global Commission on HIV and the Law, the United Nations Development Program (UNDP) and the Joint United Nations Program on AIDS (UNAIDS), among others, declare that any use of criminal law against people living with HIV should be strictly limited to exceptional cases of intentional and malicious HIV transmission to another person and only where real harm occurred. However, the law and law enforcement practice go beyond this limitation in many countries.

According to HIV Justice Worldwide, Europe and Central Asia is the region with the second highest number of laws criminalizing HIV exposure, non-disclosure and transmission. 18 of the 19 countries where such laws have been adopted are in the EECA region. Many of them allow criminal prosecution for actions that do not pose a risk of HIV or pose a low risk only. These laws do not recognize condom use or low viral load as a means of protection against prosecution. They criminalize oral sex, individual breastfeeding cases, as well as bites, scratches, bites, or spitting. Such laws were developed in the times when efficient ARV therapy was not yet available and the HIV diagnosis was equated with a death sentence. The implementation of such laws is most often informed by myths, misconceptions on HIV transmission ways, and stigma against people living with HIV and vulnerable communities.

The laws of the EECA countries criminalizing the HIV transmission vary in their severity and in specific sanctions. The Russian Federation and Belarus are global and regional leaders in terms of the number of criminal cases related to HIV6. In Uzbekistan, a person living with HIV can be prosecuted regardless of whether his/her partner wants to initiate a criminal case. In 2019, a punishment was introduced in the law in Tajikistan for those who refuse to receive HIV therapy7. In many EECA countries, the punishment for any crime involving an HIV-positive person is exacerbated by the positive HIV status.

Concerned by the fact that prosecutions are not always informed by the best available scientific and medical evidence, 20 of the world’s leading HIV scientists have presented the Expert consensus statement on the science of HIV in the context of criminal law.

The criminalization of HIV transmission is a growing human rights issue in Eastern Europe and Central Asia. This fact is also confirmed by the first regional report, prepared in 2017 using the data of the communities of women living with HIV. The study was organized and conducted by EWNA with the support of GNP+ and HIV Justice Worldwide.

The study has shown that HIV criminalization is a gender issue10. The stories and cases documented in the report and other recently conducted studies illustrate that women are more likely to be persecuted, as they are often the first to become aware of their status through regular HIV testing during pregnancy, but they are less likely to safely disclose their HIV positive status to their partner due to gender inequality in the family, economic dependence and high levels of violence. In addition, women living with HIV are less likely to receive adequate legal assistance and to have competent representation in court. In their stories, women talk about violence, threats, and blackmail associated with their HIV-positive status. The laws adopted were designed to protect women from HIV. Unfortunately, this is not the case in the reality as HIV criminalization makes women more vulnerable to violence and structural disparities. HIV criminalization increases the vulnerability of women to deprivation of parental rights, property loss, and poverty.

EECA activists make essential efforts to advocate for the decriminalization of HIV infection. Thus, the active advocacy work conducted by the community of people living with HIV pushed Belarus to adopt an important legislative amendment: the HIV-positive partner should be exempt from criminal liability if he or she has timely warned the HIV-negative partner about HIV and the latter has voluntarily agreed to take actions, which created a risk of infection. However this step alone is not sufficient to solve the issue of HIV criminalization.

We call attention of the EECA countries to the fact that in a society with low stigma and discrimination, people are more likely to be voluntarily tested for HIV and, learning about their status, begin ARV treatment.

We urge communities of people living with HIV and other criminalized and marginalized communities, in particular sex workers, LGBT people, people who use drugs, to unite and take a consolidated position to counter HIV criminalization, presenting a united front against HIV stigma and discrimination embedded in the law.

We urge governments and parliamentarians to use general law to prevent HIV transmission in the harm to health context and, instead of applying criminal law in any cases other than actual infection transmission by malicious intent, take steps to encourage people to be tested, take ARV treatment, communicate their HIV status and have safe sex without fear of stigma, discrimination and violence. This can be achieved by adopting and applying anti-discrimination laws and organizing public information campaigns to dispel myths about HIV, as such campaigns are evidence-based and are led by people living with HIV.

We urge prosecution agencies and prosecutors, to use scientific evidence and evidence-based medicine, in particular the evidence included in the Expert consensus statement on the science of HIV in the context of criminal law, in pre-trial and trial proceedings, in order to limit or prevent abuse of criminal prosecution in cases of allegations of HIV transmission or exposure or in cases of non-disclosure of HIV status.

We urge the media to stop demonizing people living with HIV, presenting us as criminals and as sources of infection. We request the media to consider HIV related issues from the perspective of human rights and use facts and evidence-based medicine while covering such issues.

We encourage donors to invest in communities and advocates opposing HIV criminalization, which undermines human rights and public health.