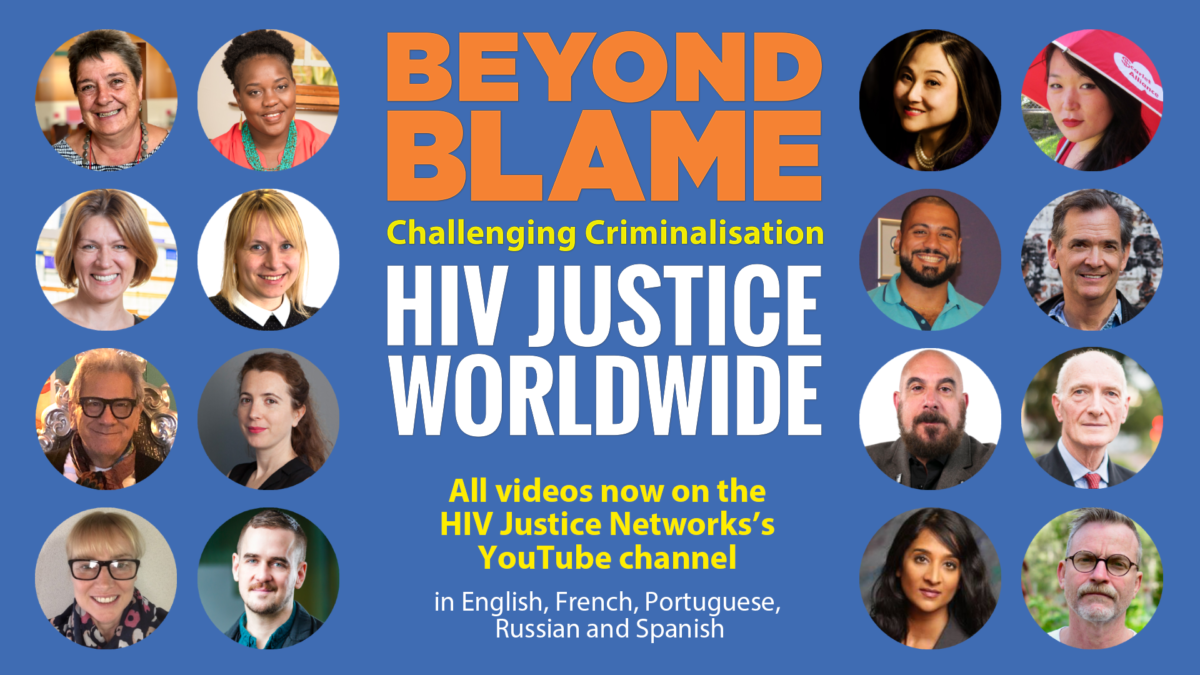 Earlier this month, advocates from all over the world came together for two hours to discuss the successes and challenges of the global movement to end HIV criminalisation.

All of the recordings of Beyond Blame: Challenging HIV Criminalisation for HIV JUSTICE WORLDWIDE are now available on the HIV Justice Network’s YouTube Channel.

“HUGE pleasure 2B at #BeyondBlame2020 conference – deftly curated, deeply informative; speakers were great; the passion & commitment to #HIVjustice was palpable. Much progress yet a sober reminder that the work is far from over.”

The full-length director’s cut version – with enhanced audio and video – is now available in English as well as with the audio track of the recorded simultaneous translation in French, Spanish, Russian, and Portuguese.

The English version is also available as a YouTube playlist in ‘bite-size’ chunks, with each segment of the webshow available as standalone videos.  This means, for example, if you just want to watch (or share) the segment on ‘women challenging HIV criminalisation in Africa‘, or on ‘bringing science to justice, and justice to science‘, it’s now possible.

“That webinar was perfectly executed. Great sound, engaging transitions (they actually played people on and off!), and multiple speakers in various collections. Having ALL OF THEM back at the end showed the breadth of this technical accomplishment and the depth of the speakers’ field of expertise. Not everyone may notice these things but boy, I sure do, and it was totally pro. I’ve seen big name conferences who couldn’t get this right… Congratulations all around, and especially to [director] Nicholas Feustel.

We have also made available for the first time the standalone recording of Edwin Cameron’s closing speech, which inspired so many.  The transcript is included in full below.

“We have been being battling this fight for many years. Since the start of the HIV epidemic we as gay men, as gay women, as queers, as transgender people, as sex workers, as people using drugs, have been persecuted by the criminal law. And I’m here to say, “Enough! Enough!

It is a long struggle we’ve engaged in. And it’s one that has hurt many of us. Some of us here today, some of us listening in, some of us who have spoken, have felt the most brutal brush of the law. They have been imprisoned, unjustly prosecuted, unjustly convicted, and unjustly sent away.

HIV is not a crime. But there is more to it. Criminalising HIV, criminalising the transmission or exposure of HIV, as many countries on my own beautiful continent Africa do, is not just stupid and retrograde. It impedes the most important message of the HIV epidemic now, which is that this epidemic is manageable. I’ve been on antiretroviral treatment now for very nearly 23 years. My viral load has been undetectable for more than 20.